The Carolina Hurricanes got a very big win as they defeated the Colorado Avalanche in Denver in a 3-0 shutout. However,  Calvin de Haan, left the game with an injury. The 27-year-old defenceman took a stick to his face near his eye from Alexander Kerfoot on the follow-through from a shot.

#MARCH11 #CARvsCOL 3rd period
Scary moment here as #CAR Calvin de Haan was hit near the eye with the blade of #COL Alex Kerfoot stick on the follow-through.#TakeWarning #GoAvsGo pic.twitter.com/A5SBs1YMF9

The defender was forced to leave the game immediately and he did not return. Following the game, Head Coach Rod Brind’Amour said de Haan went to the hospital for further evaluation. The Ottawa native is day-to-day with an upper-body injury for now.

He signed as an unrestricted free agent last summer in Raleigh with the Hurricanes. The Canes gave him a four-year contract worth $4,550,000 per season. Left-handed defenceman spent his whole career with the New York Islanders prior to his signing with the Hurricanes. During the current campaign, de Haan has collected one goal and 13 assists for 14 points in 67 games.

Immediately following the incident, de Haan left the ice in obvious pain. The Hurricanes should know more of his absence today after further tests. Carolina has won the game thanks to a 38-save shutout performance by their goaltender Petr Mrazek.

The Hurricanes find themselves on the sixth place in the Eastern Conference with 83 points. Their lead over the ninth-placed Montreal Canadiens is presently four points. It would be difficult for the Canes to lose good defensive blueliner in de Haan long-term. However, the Hurricanes play their next game on Friday night, when they visit the Columbus Blue Jackets in a blockbuster battle for the playoffs with the Metropolitan Division. 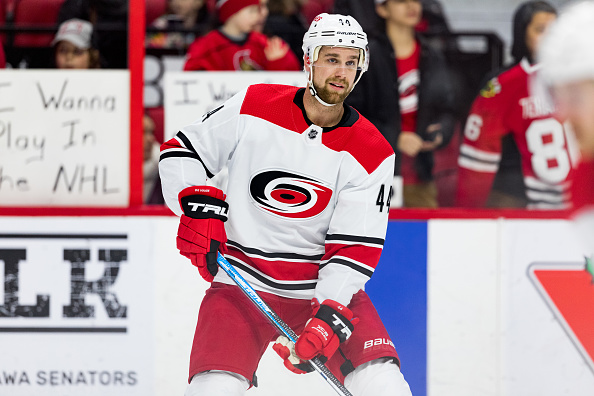 OTTAWA, ON – JANUARY 06: Carolina Hurricanes Defenceman Calvin De Haan (44) during warm-up before National Hockey League action between the Carolina Hurricanes and Ottawa Senators on January 6, 2019, at Canadian Tire Centre in Ottawa, ON, Canada. (Photo by Richard A. Whittaker/Icon Sportswire via Getty Images)