The New Jersey Devils announced that winger Miles Wood will miss the next four weeks with an ankle fracture. Kyle Palmieri is also week to week with an upper-body injury.

Vatanen is back, but list of #NJDevils banged up grows:

Wood left the game after taking a shot off his ankle in the first period of Monday’s game against the Montreal Canadiens. He didn’t return to the ice in the second period. There is no indication of how Palmieri suffered his upper-body injury.

Palmieri has scored 26 goals and 22 assists for 48 points to go along with 38 minutes in penalties so far this season. His possession numbers were 48.7 percent Corsi and a relative Corsi of +2.0 percent.

Over his nine-year NHL career, Palmieri has played for the Anaheim Ducks and New Jersey Devils. He has 149 goals and 142 assists for 291 career points in 485 career games. He was originally drafted by the Ducks 26th overall in the 2009 NHL Draft.

Wood has scored eight goals and 13 assists for 21 points to go along with 72 penalty minutes in the 2018-19 season. His possession numbers were 49.2 percent Corsi and a relative Corsi of +2.2 percent.

Wood has spent his entire four-year career with the Devils. He has 35 goals and 35 assists for 70 career points in 193 career games. He was originally drafted by the Devils in the fourth round, 100th overall in the 2013 NHL Draft.

What This Means for the Devils

The injury woes continue for the Devils as they lose one of their top scorers in Palmieri. He is easily the biggest of the two losses for the Devils as he his second on the team in power-play goals. The injuries will get the Devils a chance to look at some younger players.

With these injuries taking place the Devils have called up forwards Nick Lappin and Blake Pietila from the AHL. Lappin will take Palmieri’s spot on the top line and Pietila will be on the third line. 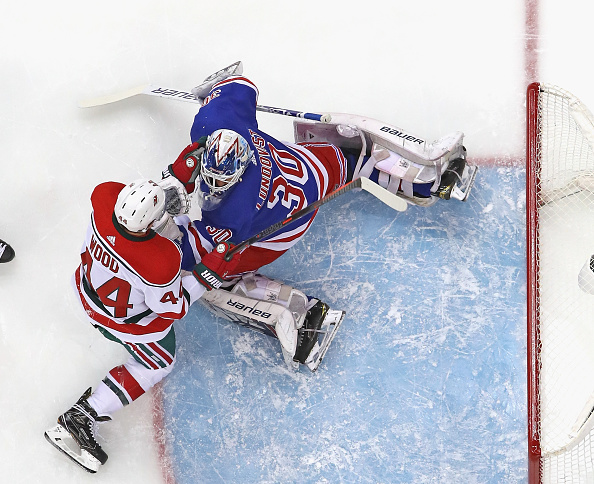 NEWARK, NEW JERSEY – JANUARY 31: Miles Wood #44 of the New Jersey Devils moves in on Henrik Lundqvist #30 of the New York Rangers at the Prudential Center on January 31, 2019 in Newark, New Jersey. The Rangers defeated the Devils 4-3. (Photo by Bruce Bennett/Getty Images)