On Monday, September 24, 2018, during the 2018-19 preseason campaign the Philadelphia Flyers of the National Hockey League (NHL) unveiled Gritty, a 7-foot fuzzy creature with a wild orange beard, googly eyes, a squeaky belly button and the ability to blow smoke out of his ears as the newest member of their organization.

Join us in welcoming the newest member of the #Flyers Family, @GrittyNHL!!

According to a Flyers press release, the team consulted with Dave Raymond. He’s he self-proclaimed “Emperor of Fun and Games”, and his company Raymond Entertainment. Raymond truly pioneered the field of sports mascots as the first inhibitor of the Philadelphia Phillies’ world-renowned Phillie Phanatic. When comparing the two mascots, you can clearly see Raymond’s legacy at work.

Not only does he entertain players and fans alike. Gritty takes on an active role in embracing the Flyers community outreach initiatives in the Greater Philadelphia Region.

Moving directly from a college student at the University of Delaware to big furry green creature with a pot belly and a long snout, Raymond served as the original Phanatic for over 16 years. Over his career in the suit, David’s performance as the Phanatic carried the Phillies to a World Series victory in 1980 and unimagined levels of popularity. He helped to spawn a revolution in the mascot industry.

Leveraging the unique lessons, David learned from the inside out – literally. He made a seamless transition to the world of character branding and mascot training. Since starting Raymond Entertainment twenty years ago, David has overseen the creation and rehabilitation of hundreds of mascots and the brands that support them.

Raymond Entertainment has developed a global reputation of excellence in quality, creativity and customer service. His clients range from small to large. He has helped the minor-league Albuquerque Isotopes create Orbit, the Space Dog. He assisted the NHL’s Dallas Stars with Victor E. Green (the Stars’ main color is green). The Toledo Mud Hens, another minor-league baseball team, invented Muddy and Muddonna. Built Burnie for the National Basketball Association‘s Miami Heat. He, of course, he helped the Flyers bring Gritty to life in Philadelphia.

So, how did Gritty find his way to the Flyers? As the story goes, he was discovered during the renovations currently taking place at the Wells Fargo Center.

“His father was a “bully,” so naturally he has some of those tendencies. Talented but feisty, a fierce competitor, known for his agility given his size. He’s loyal but mischievous; the ultimate Flyers fan who loves the orange and black, but is unwelcoming to anyone who opposes his team. Legend has it he earned the name “Gritty” for possessing an attitude so similar to the team he follows.

He claims that he’s been around for a lot longer than we know it. The recent construction at the Wells Fargo Center disturbed his secret hideout forcing him to show his face publicly for the first time. He has some oddities that are both humorous and strange. A number of times he’s been caught eating snow straight from the Zamboni machine, and unbeknown to most, his love of hot dogs has been inflating the Flyers Dollar Dog Night consumption totals for years.

That being said, there’s no denying that he’s one of our own.”

LWOH: How did you land the internship with the Philadelphia Phillies front office? How did it evolve into portraying the original Phillie Phanatic?

David Raymond: In 1976, when I was a student at the University of Delaware (UD) studying to be a teacher and a coach, my father, legendary UD football coach Harold R. “Tubby” Raymond, was very close with the Carpenter family who at the time owned the Philadelphia Phillies and he helped me secure an internship. During my practicum, I worked for the organization for two summers and established some great friendships with the front office family.

In 1978, they asked me if I could stay for all of the games. If I committed to do that, then my internship would be extended! That sounded exciting to me, so I agreed even though I wasn’t clear as to what they expected me to do during those games. I first saw a drawing of the Phillie Phanatic in late winter of 1978. From there, I was hooked and loved the prospect of performing as a large, furry, green Muppet!

LWOH: Take us back to April 25, 1978, and describe for us your first appearance as the Phillie Phanatic?

David Raymond: The original Phillie Phanatic costume arrived at the ballpark on April 25, 1978, which meant that I only had 2 hours prior to game time to try it on. Thankfully, it fit great and looked awesome. The first Phillies player to see it was second baseman Tony Taylor and he couldn’t stop laughing so I was confident but had some reservations especially since my boss never provided any specific directions.

So, I went to office of Bill Giles, then team President, and asked him what he wanted me to do and he simply told me to go out and have fun! I remember distinctly, as I ran out of his office he yelled, “G rated Fun David…G rated”! On that historic night, my big discovery was that when I fell the crowd would laugh, so I decided that I had to have the Phanatic fall down…a lot! Most of the Phillies front office did not believe that the Phanatic was going to work so it was much to everyone’s surprise that not only did the Phillies fans like the Phanatic…they loved him!

LWOH: Who created the interaction between the Phanatic and the crowd, players, managers, coaches, announcers, and umpires?

David Raymond: That was really up to my discretion and I started that interaction because I wanted the acceptance of the players even more than the fans. It really was the most fun that I had as the Phanatic and fans today still ask me about it. I loved imitating their batting styles just like I did when I was a kid. When I was imitating a visiting player I always included an irreverent edge to the portrayal.

When I did a Phillies’ player I was always respectful. The visiting players loved it so much they would bring me information about specific teammates that I would have not known otherwise that made my imitations more “personal”. When that information was shared to other teams players just continued to egg me on. It just got better and better.

LWOH: Tell us about the reaction Ed Snider, former Chairman of Comcast Spectacor a Philadelphia-based sports and entertainment company that owns the Flyers, had about the creation of a mascot?

David Raymond: Ed, who died in April 2016, was an old-school kind of guy. There was no place for furry creatures in the man-to-man battles he and the team that mirrored his personality so regularly fought. He didn’t want this at all.

I used to ride my four-wheeler over to the Spectrum for Sixers playoff games and one night I decided to go over for a Flyers game. The next morning the Flyers called my bosses. They said, “Don’t ever do that again. We don’t want him anywhere near us.”

LWOH: Can you advise what research and development you employed to create Gritty?

David Raymond: In terms of research and development, we followed a tried and true process for success. We focused on organizational commitment, generated an authentic back story (see Gritty’s Lore above), created a unique and identifiable design and featured an integrated marketing approach.

LWOH: Did you have any advice for the Flyers organization about Gritty?

David Raymond: Yes, I started off by saying, “You guys know that it’s all going to be negative when you roll him out, right? You could have the incarnation of the Phanatic and you’re going to get slammed.” Right away I knew we were in great shape because they went, “Yep, we know it. We’re prepared for it. We can’t wait for it.”

LWOH: Who was chosen to perform as Gritty?

David Raymond: When it came to filling that costume, the Flyers chose someone they and I knew, a young man — the team asked that his name not be used — who had performed for the minor-league Phantoms. This kid was perfect. He’s going to be one of the best mascots in the country.

Tremendously famous, the mascot has captured the hearts of Philadelphians and has cemented his new legacy in the community. 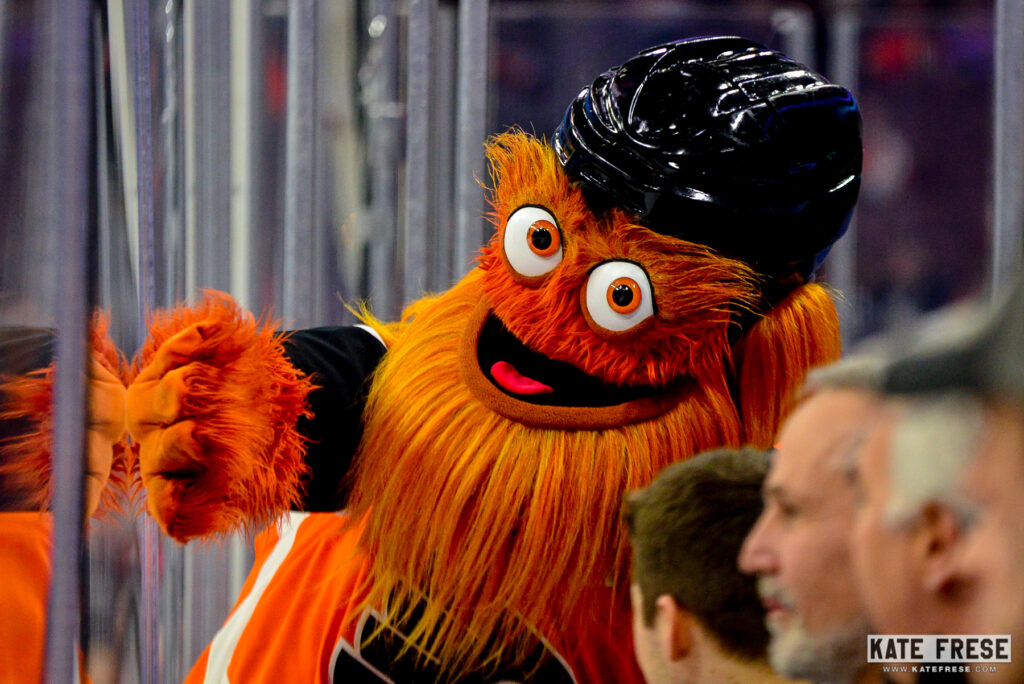 PHILADELPHIA, PA. – Philadelphia Flyers mascot Gritty poses with the fans during a game with the Tampa Bay Lightning on Feb. 19. (Kate Frese/Last Word on Sports.)