The Arizona Coyotes are struggling through multiple injuries this season.

Not qualifying for the playoffs since the 2011-12 season, it was thought that the Arizona Coyotes actually had a shot to be included in postseason play this time around.

That is until they were hit with a tsunami of injuries to key players.

It was announced that the young centre, who signed a six-year $26.7 million contract, would be out for the season about a month after he had signed his new deal. He came down with a pectoral injury which required surgery and has not played a single game this season.

There have been rumours that he could return to the lineup before the season is out. In fact, he began to skate recently. According to Coyotes head coach Rick Tocchet, he could be ready for a reconditioning assignment with the team’s AHL affiliate, the Tucson Roadrunners, as soon as this weekend. But, that was ruled out by general manager John Chayka.

Per president of hockey ops John Chayka, C Christian Dvorak won’t go to Tucson (AHL) this weekend for a conditioning stint/games. The staff will review the plan after a few more practices. The feeling is that Dvorak is fully healthy, but needs reps, work — a quasi-training camp.

The addition of Dvorak would be crucial as the team is really down at the center ice position.

The defenseman who normally partnered with Oliver Ekman-Larsson on the first unit has been down with a knee injury since December 15, 2018. He too has been making strides of making an early return to the depleted Arizona Coyotes’ lineup.

His return is vital also since the team has just one right-handed shooting defenseman in Russian Ilya Lyubushkin who is in his first season in the NHL. He has played well bringing a physical presence to the Arizona blueline.

He was wearing a non-contact jersey. This was the first time he took part in practice since suffering a knee injury in mid-November. There’s still no timetable for his return. “He has different energy than anyone else on this team,” Arizona Coyotes center Derek Stepan said via the Arizona Republic/Phoenix Gazette. “He’s a unique bird. When it comes to energy, he seems to have a bunch of it and it seems to help us out a lot. A lot of guys look to him to lift him up when they’re dragging a little bit.”

It’s not very promising for a team to lose their starting goalie, but nothing this season for the Coyotes has been close to promising when it comes to hard luck injuries.

Raanta was playing decent goal until he fell to injury on November 28th, just 12 days after Demers fell as a casualty. He gathered a 5-6 record with a .906 save percentage and a 2.88 goals-against-average.

There’s no real update on his return, and Darcy Kuemper has filled in nicely in Raanta’s absence. He has accumulated a 13-14-5 record and a .911 save percentage with a 2.77 goals against average.

Grabner had a nasty injury when a stick caught him in his left eye. It wasn’t a pretty sight, and speaking of sight… he’s hoping his vision is restored back to normal before he even considers re-joining the team. 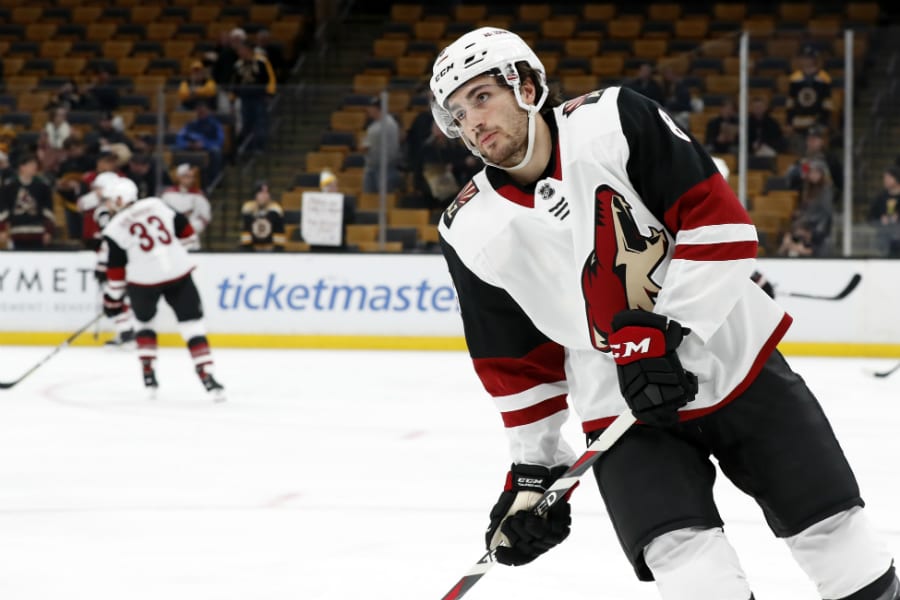 This injury was a real heart-breaker since the Arizona Coyotes traded for Schmaltz and he was really playing some good hockey and developing chemistry with Clayton Keller.

He was lost on January 1st for the rest of the season, and again the forward lines of the team were devastated. Schmaltz had 14 points including five goals.

What amazed most observers was that general manager Chayka didn’t pull off another trade to replace a premier player like Schmaltz.

Besides the above listed long-term injuries, the team has had various other key players miss significant ice time.

Richardson had a hand injury and just returned to the lineup last night against the St. Louis Blues. Missing 17 games has hurt the team’s faceoff stats since “Richie” has 54.7 percent success in the circle.

Vinnie Hinostroza was also lost for 10 games and that really depleted the front lines for a period of time. His speed and potential to score weren’t there.

The list continues with Jakob Chychrun missing 22 games at two different occasions due to his second major knee injury in his young NHL career.

Even With Multiple Injuries, All Hope is Not Lost

The Western Conference’s parity (or mediocrity) has been kind to the Arizona Coyotes. Even with all these starters out due to injury, they remain just four points out of a playoff spot.

Just 25 games remain and if they can get back players like Grabner, Dvorak and perhaps Demers their chances increase.

They’re no stranger to diversity… it’s their middle name as they scratch and fight (like a coyote) to survive.

At this point, what choice do they have?

Main Photo: Injured Arizona Coyotes defenseman Jason Demers (55) pauses on the ice after colliding with the post during the third period of an NHL hockey game against the Nashville Predators Thursday, Nov. 15, 2018, in Glendale, Ariz. The Coyotes defeated the Predators 2-1. (AP Photo/Ross D. Franklin)