As a fan of the Columbus Blue Jackets, I would like to congratulate you on your fantastic career in NHL. Even though you went on to play with the New York Rangers and the Boston Bruins you will always be a Blue Jacket to the City of Columbus.

When you were drafted first overall in 2002, you came to a team and a city that needed a star. You filled that role almost immediately finishing third in the Calder Trophy your rookie year. The success on the ice continued with a Maurice Richard Trophy and five All-Star appearances while with the team. You were the first player that lite the fire of hockey in so many in Columbus.

Another prime example that you will always be a Columbusite is that you still live in Columbus. The night of your retirement you were spotted at the Ohio State vs. Michigan hockey game. When Columbus hosted the All-Star game in 2015, you were quoted by Dan Rosen saying “ I hold that city pretty close to my heart. Being a Blue Jacket was pretty special. I started my career there and I owe a lot to that organization, the fans, ownership, so it’s exciting to get a chance to go back for such a milestone event like the All-Star Game.”

You had multiple memorable moments in your time here in Columbus. You could choose from one of your five hat tricks as a Blue Jacket or your numerous game winners, but two goals stick out in particular. The first came on Jan. 17, 2008, the Blue Jackets were in the Stanley Cup Playoff hunt and tied 3-3 with the then-Phoenix Coyotes. You blocked a shot got up raced down the ice received the puck juked two defenders and avoided the goalie for a wide open net.

The second goal came on the road on April 8, 2009 on the road against the Chicago Blackhawks. The team was again in the hunt for the playoffs and looking to clinch a spot only needing one point to do so. The team was down 3-2 but with 5:30 left in the third you scored the goal that forced overtime. As a result, the franchise made its first postseason appearance. It was appropriate that you would score the goal to send the franchise to the postseason. Since it was you who lead the franchise for so many years.

The Ending of an Era

Things did not end on the best note between you and this fan base. However, I think that fans have now put into perspective what you did for this franchise. Yes, there was much booing every time you came back to Nationwide Arena. However, the more time went on I believe it was just something to do more than it was out of resentment. When your contract was up in Boston, there was talk about if the Blue Jackets should bring you back. According to reports by Aaron Portzline, it looks like the fans were not the only people thinking that.

Fully believe Rick Nash would have played again for Blue Jackets if his concussion symptoms had faded. That was his preference. Had a great meeting with #CBJ brass last summer.

But also feel like Nash made the right call. May he one day feel 100 percent again.

Just a few days later you did a ceremonial puck drop at Nationwide Arena. The game will feature your two old teams the Blue Jackets and the Rangers faceoff. That was your first return to the arena not as a player. For the first time in a while, you can expect not to hear boos when you step out on the ice. That should not be the last time you will be honored at Nationwide Arena. One day when both you and the franchise is ready, the fans will look forward to going to the game where the No. 61 gets raised to the rafters to be forever immortalized. 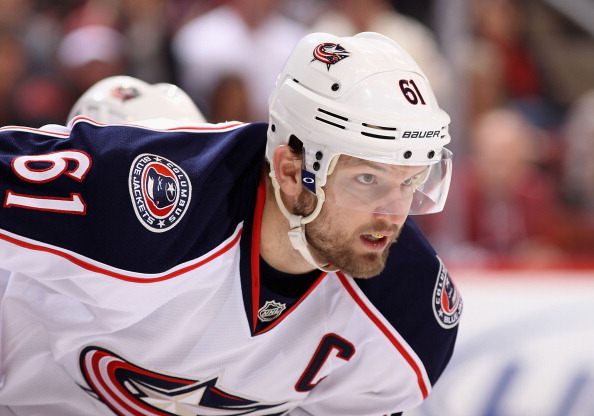 GLENDALE, AZ – APRIL 03: Rick Nash #61 of the Columbus Blue Jackets in action during the NHL game against the Phoenix Coyotes at Jobing.com Arena on April 3, 2012 in Glendale, Arizona. (Photo by Christian Petersen/Getty Images)