The Ottawa Senators ended 2018 last in the NHL. They have found themselves now 30th thanks to an overtime loss, however, it is no secret the team has struggled. Their record through 41 games is 15-21-5. So, let’s take a look at some ups and downs for the 2018 Ottawa Senators in the mid-season review.

I wrote a quarterly review this year for the 2018 Ottawa Senators. So, how has their play compared to that stretch of games? At the time of writing, they had a 42.8CF% and ranked last or second last in CF%, xGF% and CA/60.

For the whole season overall, the Sens have a CF% of 43.43% and an xGF% of 44.7%. These rank 31st and 30th respectively. So, the Sens have made slight improvements over the last quarter, however, the team is still very poor and the standings are showing that.

This was a plus for the first quarter but is the same for the whole season. The top end talent of Ottawa has stepped up and played amazing. Mark Stone and Matt Duchene have been absolutely outstanding for the 2018 Ottawa Senators. As well, Thomas Chabot has been so great he got an All-Star Game nod. Brady Tkachuk has been coming as advertised and more for the Sens this season.

This high-end talent has really helped the Senators out. When they do win games, it is a very common theme to see 4 or 5 of the same players scoring the goals. Duchene ranks 17th in the league for points per 60 minutes played. Stone has been one of the best possession players in the league and has really helped Tkachuk and Colin White find their games this year.

The 2018 Ottawa Senators don’t have a ton of high-end talent, but, their best players have been a huge plus for this season and reason for optimism going forward.

Staying in the top-six, Ryan Dzingel has been a plus for the Sens this year. He had a career-high in points last season with 41. Most people saw the potential for a solid top 6 forward, however, was curious to see if he could reach said potential. This season, he looks like he is ready to crush his career points. He has 29 points in 39 games, which puts him on pace for 59 points if he plays the rest of the year.

He has played on almost every single line this season, but he has looked really good along Duchene. The mix of Dzingel’s foot speed a skill fits well with Duchene. Duchene needs a guy who has quick and can handle the puck in some ways. Dzingel’s skill set fits much better with him then someone who is bigger and more wanting to use their body.

Dzingel is something Sens fans can look forward to for the rest of the year. Stone and Duchene are the big UFAs at the end of the season, but Dzingel will need a new contract too. It is safe to say many fans would be happy to see him stick around for a few more years.

The Ubergate situation was a major point for the 2018 Ottawa Senators. The video where Chris Wideman, Duchene and others ripped the Sens coaching staff on their poor penalty kill. While it was a horrible look, some of the criticisms were fair.

However, the latest quarter of the season has seen some solid improvement. Since the quarter review, the Senators rank 16th in goals against per 60 and have given up the 20th least goals against with 10 in that time. The shot numbers they are giving up definitely are not as ideal, however, the PK has gotten results which is a plus.

In comparison, the first quarter of the season they gave up the second most goals with 19 and ranked last in GA/60 with 11.23. The results have clearly been better on the PK.

This has been what has haunted the Senators all season long. While the “run and gun” style of hockey can lead to much more exciting games, there needs to be some defensive responsibility along with it.

Their CA/60 is 67.61, meaning they give up that many shot attempts per hour. This is 7 whole shot attempts more than the next team. An absolutely massive gap that needs to be shortened. Part of this is player usage, part of it is lack of talent, and part of it is systems. All 3 need to be improved upon as they have been massive low points this season.

Some teams give up lots of shots but can at least justify it with most the shots being low danger. However, that is not the case with the 2018 Ottawa Senators. Below is from hockeyviz Ottawa’s shot against locations. 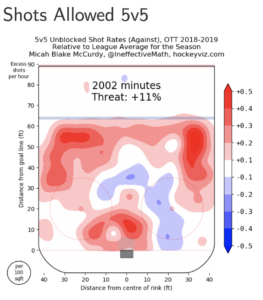 As you can see, the Sens bleed high danger chances in front. They let lots up from the point which would be less worrying if there wasn’t the massive red spot right in front of the net. Ottawa lets up 12.2 HDCA/60 (High Danger Corsi Against / 60), which ranks 4th worst in the league.

I put this one on the quarter season review as well, and also felt somewhat bad about it. Once again, the goaltending just hasn’t been good enough. I don’t even really blame the people themselves. Craig Anderson has done absolutely everything he can this year. Mike McKenna was thrown into an NHL role unexpectedly. However, both goalies have struggled.

The 2018 Ottawa Senators rank 28th in save percentage at 5v5, while part of this may be attributed to the number of shots as just stated, we can see the goalies are letting in more than expected still. Using Corsica’s goals saved above average model we can look at which goalies have been better or worse using a shooter’s skill and shot location data into the model’s input.

Anderson and McKenna both ranked poorly in this. Anderson had a -6.3GSAA and McKenna a -8.51, meaning they have both been well below average. Again, this isn’t all their fault. If you watch any Sens game you’d know just how left out to dry these guys are. But, management needed to have a better plan than this heading into the season. While Dorion has tried to fix it, it has still been a down point so far.

Knowing it’s almost going to be an automatic loss if they are not in Ottawa is not good no matter how good of a team you have. Part of this may be because of Ottawa’s lack of talent getting overwhelmed on the road. The top lines of other teams can feast on some of the lower lines of Ottawa. Another part that ties into that may be the matchups. After Chabot and Dylan DeMelo there are very few Sens D you would like to see in their own zone. As for the forwards, apart from Tkachuk and Stone who have been great, it is much of the same.

Having the skill Ottawa has doesn’t help. But, they manage to find ways to win at home, having a record of 4-14-1 on the road is really inexcusable.

Overall, this is a poor hockey team. There is really not much else to say on that. The down points could definitely have been expanded. However, there’s only so much you can say with the quality of a team like Ottawa. The points instead try to focus on things that are actually fixable this season. Not just stating they need to magically find guys to replace the likes of Cody Ceci, Ben Harpur or Mark Borowiecki who all look completely overwhelmed in their own end.

Sens fans definitely have shimmers of hope on this roster, however, it is still fair to say the downs have heavily outweighed the ups so far. Changing a few of the downs could see some big change for Ottawa. While this team looks like they will be for sure out of a playoff spot, competing and climbing spots should still be the objective.