The Chicago Blackhawks announced after tonight’s game, that goaltender Corey Crawford has been diagnosed with a concussion. Crawford’s injury was confirmed by his coach.

Corey Crawford has a concussion, per Jeremy Colliton.

The injury occurred Sunday night against the San Jose Sharks, where teammate Dylan Strome collided into Crawford, who subsequently hit his head on the goal post. It was noted that Sharks forward Evander Kane assisted in this collision, and received a goalie interference penalty.

This marks a run of similar injuries for Crawford, who missed 52 games last season because of a concussion. And was still finding his stride with a .902 save percentage and a 2.86 Goals against average in 22 games this season.

Over his extensive 12-year NHL career, Crawford has remained loyal to the Blackhawks. Where during this time he has achieved a .918SV% and a 2.41GAA in 431 career games. The Canadian native was originally drafted by the Hawks in the second round, 52 overall in the 2003 NHL draft.

“Great goaltender, great guy, an important part of the team,” said coach Jeremy Colliton, who confirmed the diagnosis. “We’ll see. We hope for a quick recovery.”

This injury raises further concerns for the Blackhawks, who are currently fighting with the Los Angeles Kings for the bottom spot in the league. Back up goaltender Cam Ward is the only other goalie on the active roster currently. It is now likely the Hawks will call up Anton Forsberg or Collin Delia from Rockford IceHogs to fill the void.

What may be more concerning though, is the 33-year-olds future prospects. Although no further information on injury timescale at present. It does pose a difficult debate regarding the Jennings Trophy winner long-term health. It may be time for the Star goalie to consider retirement.

What began as a promising start to the season is now fast becoming another disappointing one. The Blackhawks will play the Nashville Predators on Tuesday night. 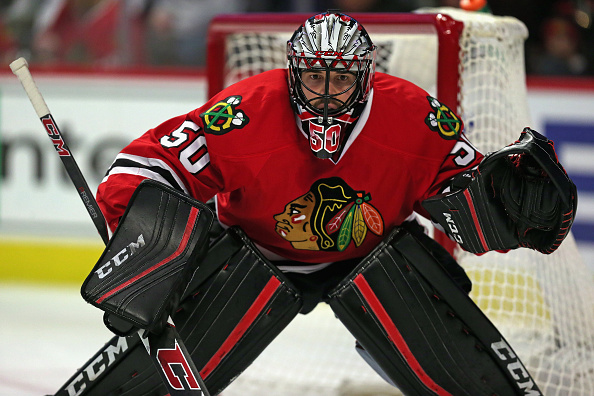 CHICAGO, IL – JANUARY 17: Corey Crawford #50 of the Chicago Blackhawks follows the action against the Montreal Canadiens at the United Center on January 17, 2016 in Chicago, Illinois. (Photo by Jonathan Daniel/Getty Images)