The Ottawa Senators were a team that had low expectations entering the season. A team that saw their franchise player leave after a long and painful season didn’t have much hope. However, rookies like Brady Tkachuk and Drake Batherson, along with other players have helped the team off to a better than planned start. While players have stepped up, the main reason for this is Craig Anderson. If Ottawa wants to keep improving they need to start helping him in more ways than one.

Craig Anderson Has Been Big For Sens

Anderson this season has played a lot of games already. In those games, he has ranked as a below average league goaltender according to Corsica. However, not only is that not all his fault, but he also has stepped up his performance from last year.

Through 24 games this season, the Park Ridge, Ill. native has posted a 0.918 save percentage at 5v5, his expected save percentage is .923. Meaning he is -0.49 in save percentage vs expected. He also has a -3.21 Goals Saved Above Average. This ranks 21st out of 29 goalies with 19+ games played this season. So as you can see, Anderson has been roughly below league average, but not by a lot.

Compare that to last season and you see why Sens fans are happy. The 37-year-old had a 5v5 Save Percentage of .902, with an expected of .919, putting him at -1.7. He had a Goals Saved Above Average of -23.6. That ranked him dead last for the 36 goalies who had at least 35 games played. As you can see, the improvements are still night and day.

I mentioned earlier that slightly below average numbers may not be all on Anderson. While GSAA does take into account difficulty, it doesn’t take in how much a goalie has to play.  Anderson is one of the oldest goalies in the league at 37 years old. Seems like someone you would want to control or limit starts to. This way when you need him down the stretch he won’t be worn out. However, the Sens have played 27 games. Anderson has played in 24 of them and after tonight it will be 25 of 28.

That’s 89.29% of them and puts him on pace for 73 games this season. That is way too many for any goalie in this league. Let alone one of the oldest ones still playing. The Senators need to help Andy by looking for someone they trust to play some games. Mike Condon struggled and is ultimately injured. They have brought up Mike McKenna, however, are still hesitant to use him much, rightfully so.

Pierre Dorion needs to go out and find someone he believes can take some games. Whether that be through waivers, trade or signing. Something needs to happen so Anderson can get some rest. If this team truly wishes to stay out of the basement goaltending is going to be the key, you can’t be burning out your goalie like this.

Help In The Games

While playing in almost 90% of the team games will always be too much, another way Ottawa can help Anderson is by giving him less work while on the ice. It’s not like Anderson is playing every game in front of a great defensive group where he doesn’t have to work super hard each night. The Sens give up some of the most shots in the league.

Anderson alone this season as faced 658 shots on net. That’s 69 more than the second most any goalie has faced. Anderson is being absolutely pelted with pucks and better support is needed.

The Senators need to both limit the overall shots and the quality of shots on Anderson to keep him fresh. He is playing way too much and way too hard during the games.

In the future, Ottawa really needs at least a short-term fix to their goalie problems. Prospects Filip Gustavsson and Marcus Högberg are not NHL ready yet and likely won’t be this season. The Senators should look to both find a backup and also limit the scoring chances and shots against. This will not only help keep their goalie more rested, but also help them win games which should be the ultimate goal. 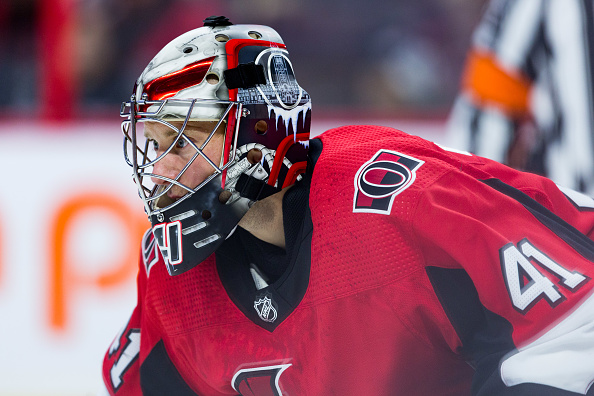 OTTAWA, ON – OCTOBER 13: Ottawa Senators Goalie Craig Anderson (41) prepares for a face-off during third period National Hockey League action between the Los Angeles Kings and Ottawa Senators on October 13, 2018, at Canadian Tire Centre in Ottawa, ON, Canada. (Photo by Richard A. Whittaker/Icon Sportswire via Getty Images)