Artemi Panarin is playing through his contract year with the Columbus Blue Jackets without an extension in sight. On July 1st, 2019, Panarin is set to become an unrestricted free agent and has stated that he does not want to negotiate during the season. Panarin is looking like he will test out free agency this upcoming summer after he was unwilling to negotiate an extension before the season as well. If he makes it to July 1st and signs with another team, Panarin would be the biggest free agent to walk in the salary cap era, and yes, that includes John Tavares.

Panarin Could Be The Best UFA In Modern NHL History

Artemi Panarin puts up a lot of points, but that’s just scratching the surface. Panarin does a lot of things extremely well. First off, he carries the puck out of his zone and into the opposition’s zone with possession extremely well. In fact, he is one of the best in the league at this. 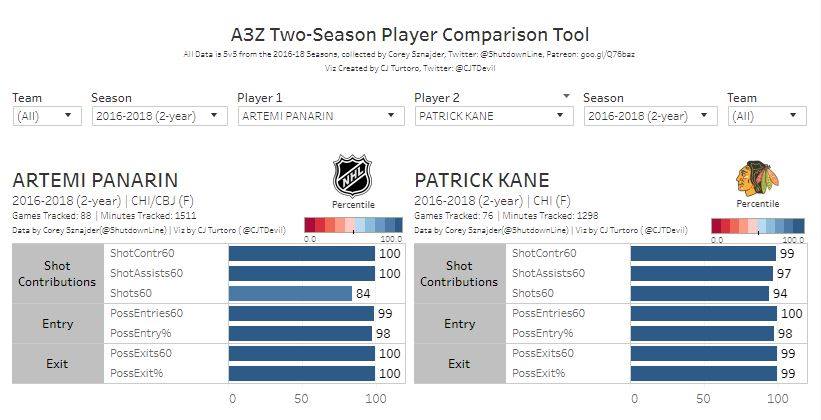 Comparing Panarin to his former linemate Patrick Kane, he is one of the best comparables. This leads to their team controlling possession for longer in the offensive zone and thus leads to even more shot attempts for.

Watch as Panarin exits his zone with control and enters the offensive zone with ease. This is a constant occurrence for Panarin. He also finishes off the play with an incredible Royal Road pass to Seth Jones to set him up for the easy goal. This is another thing that Panarin does extremely well. 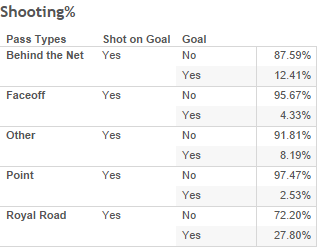 As the chart above shows, the Royal Road passes across the middle of the ice result in more goals than other types of passing when it forces the goaltender to move laterally all the way across the crease. This is something Panarin continues to do.

He continuously sets up his teammates in high danger spots and gives them a good chance to score. Panarin makes his team around him better by being extremely good at many things.

Panarin also ranks 15th among all forwards (534) in CF% at even strength since the 2016-17 season with a minimum of 200 TOI with 55.59%. He is constantly at the top nearly every stat you could look at. Panarin is even tied for 3rd with Nikita Kucherov among all forward in points since 2016-17, with only Connor McDavid and Patrick Kane having better point totals. It’s not even a matter of Panarin putting up good underlying numbers and not producing, he is at the top of the league with the Kane and McDavid type players.

What Is Artemi Panarin Worth?

Now that it has been established just how good Panarin is, what would his next contract look like? It’s a safe bet that Panarin will be signed for max term, so either 8 years if the Blue Jackets sign him prior to July 1st, or 7 years if he signs with any team July 1st and onward. As good as Panarin is, this puts him in the elite company among the leagues top paid players.

While a fantastic player, Panarin is not quite McDavid level, but no one is that level with McDavid. That would potentially set a ceiling for Panarin. Depending on how you look at it, this sets the ceiling at $12.5 million or 16.67% of the cap. This is the area that Panarin will not reach, however, it is not unreasonable to think he could reach just below it. The top paid wingers in the NHL are currently Kane at $10.5 million, Alex Ovechkin at $9,538,462, and Jamie Benn at $9.5 million. Given that Panarin’s comparables are Kane and McDavid, that sets a range that Panarin could be looking at in terms of contracts. This could put him at a Kane contract model 10.5 per year. This would make Panarin tied as the highest paid winger in the NHL, and deservedly so.

Montreal currently has just under $7 million in cap space at this point in time. This is with very few players to re-sign this upcoming off-season so the team could feasibly afford him.

Montreal actually only has three players expiring to UFA status at the end of the year, and none of them are core roster players.They are Antti Niemi, Tomas Plekanec, and Jordie Benn. If Montreal thought they could get Panarin the team, would happily let these players walk in order to sign him.

He could get paid his full worth and be a part of such a historic franchise that was part of the original six while being heavily admired by all the fans there. The Habs have a good foundation for a team and adding Panarin would certainly help the team.

As young as he may seem for beating out McDavid for the Calder Memorial Trophy in 2016, he is actually 27 years old. He is in his prime and is likely looking for his window to win the Stanley Cup, and the Montreal Canadiens, as good as they’ve looked to start the season, seem to be in a rebuild.

Arizona has quite a bit of cap room, currently sitting at $9 million under the cap which puts them at $70.4 million spent on players. This offseason they will go down to $62 million. Between the low amount of money being spent and the cap going up next season, this will allow them more than enough room to sign Panarin, as well as most of their expiring player if they so choose.

Arizona has quite a few expiring RFAs coming up. Even with Jakob Chychrun, Nick Cousins, Lawson Crouse, and Brendan Perlini they could theoretically re-sign all these players and still afford Panarin if the internal cap Arizona has will allow it.

Arizona has the cap space to pay Panarin his full worth, and maybe a little over his value as insurance to come to play for them.

Arizona doesn’t have much draw for players to come to play for the team. They have an internal cap, not allowing maximum spending. The team has been basement dwellers for what seems like years, and even though it seems like the team should improve every year they continue to fail to meet any expectations of improvement. The location also tends to be less than desirable for players to be.

Philadelphia has $7.5 million in cap space with a lot of their major players still locked up. With only a few must re-sign players and an increased cap, this puts them in a good position to add a big free agent player on July 1st in free agency.

The Flyers have a few notable names expiring with some needing a raise and one that will be a departure that the team would be fine with. Jori Lehtera is an upcoming UFA and that will take $4.7 million off the books for the team. The Flyers also have Wayne Simmonds as a UFA and Ivan Provorov and Travis Sanheim as notable RFAs. Sanheim and Provorov are must sign for the Flyers, and the team would obviously like to have Simmonds back if possible, but if it’s between Simmonds and Panarin then it seems like a clear choice between the two. The team also needs to re-sign some goalies with all of Brian Elliott, Michal Neuvirth, and Calvin Pickard expiring. None of these goalies will need a substantial raise though.

He could get paid his full worth and be on a good team where his presence would put them into new territory and make them real contenders.

No major reason to not sign here such as competitiveness or money. It checks both boxes, so if Panarin doesn’t consider Philly, it could be for personal reasons.

The Blue Jackets have $5.6 million in cap right now, with quite a few players on expiring deal this season. Unfortunately, a lot of these players are key players that the team would probably prefer to keep.

Well, one of their expiring players is Panarin, clearly, and another big piece is Sergei Bobrovsky. The team will also have to re-sign RFAs Ryan Murray and Zach Werenski, who is due for a raise. It isn’t reasonable to believe that the team is able to keep all these players while paying them what they are worth unless, of course, they bridge Werenski to keep the team together for a while longer. Even then, though, it would still be difficult to afford all these players.

Sometimes it’s just easiest to stay in the city you are currently in. The player knows the system, he’s familiar with the city and teammates, and it’s easier on the team to offer him a new contract, where one team would have to shell out an estimated full $10.5 million, Columbus just has to allot an extra $4.5 they weren’t before to raise him from $6 million to 10.5.

He wouldn’t be heading to a new team and improving the team at all. It’s not a concept of “what would this team look like with Panarin?” Everyone already knows what a Blue Jackets roster with Panarin looks like. While an impressive roster still, it doesn’t move the needle in any way, it just remains the same. Like Tavares, Panarin may want to go somewhere that his presence puts the team into Stanley Cup favourite territory.

The Future For Panarin

Panarin really could have his pick of where he gets to play. 31 teams could use Artemi Panarin on their roster, and it’s a matter of where Panarin wants to go and how much money he wants. He is one of the top players in the NHL in multiple aspects, comparing to McDavid, Kane, and outperforming many other top players. He is a machine at producing offense and the way he does it make him an analytic dream player. If he decides to test free agency, it wouldn’t be a big leap to call him the best free agent in modern history.