Many people are likely unfamiliar with the term “strong link” or why they are important in hockey. Luckily Alex Novet has gone in greater depth here, but I’ll provide a quick synopsis of his findings.

Basically, there are two types of sports, strong and weak link. In a strong link game, star power drives success, while in a weak link game, teams with superior depth are better off. To answer the question, what kind of game is hockey? Alex used this picture. 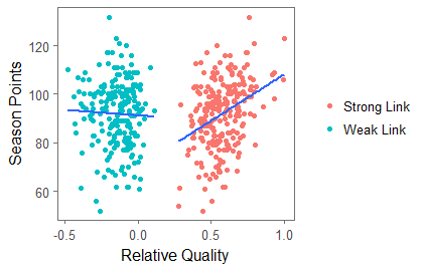 The Y-axis shows each teams season point total, while the x-axis is the value of the teams best and worst players (Worst in blue, best in red). The first picture shows us there is no relationship between weak link value and a teams point totals. In a weak link game (like soccer), the stronger the weakest link, the better the team would be, but no such relationship exists in hockey. The second graph shows us there is a relationship between a team’s best player and their teams point total. Generally, the stronger the teams best player the more points that team ended up with. So even though the Vegas Golden Knights are in the Cup final and Connor McDavid‘s team didn’t make the playoffs, hockey is a strong link game, driven by the best players.

Since hockey is a strong link game, every NHL front office should have one goal above all else, acquire stars. For our purposes, strong links are going to be defined as the top 30 forwards (31 this year because of the Vegas expansion) in goals above replacement (GAR) each season since 2008-09 (Data Here). GAR takes everything players do into account, and boils their output down into one number. So, in a perfectly competitive market, the top 30 GAR players would each be the strong link on their own team. How have teams generally acquired their strong links? Let’s break it down. 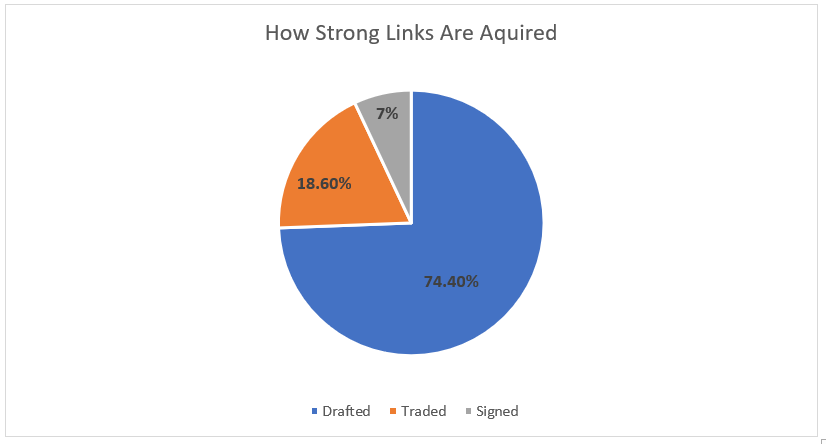 There are three different ways teams have obtained their stars. First is signing them through free agency. Only seven percent of strong link seasons have been acquired this way. Players peak around age 24, meaning players almost always enter free agency past their prime. As a result, teams generally don’t get their elite talent on the open market.

The next way teams have added top-end talent to their roster is in trades. About 19% of strong link seasons have been obtained in a trade. This means it’s possible, but not all that probable for a team to get their best players in trades.

Finally, we have the draft, where an overwhelming majority of stars are acquired. Sure every armchair GM loves to mock trade the next Taylor Hall for Adam Larsson, or dream that the unsigned free agent their team signed might become the next Artemi Panarin, but the reality is that NHL teams should plan to acquire their strong links through the draft. It’s where about 75% of them come from.

So thanks to Alex Novet’s work and my findings we know two things. First, good NHL teams are driven by strong links. Second, most teams will need to acquire these players through the draft. This gives us an alternative way of viewing an old concept, draft pick value charts.

To put a new spin on value charts let’s look at each pick based solely on its ability to produce strong links. Using the parameters set above, here’s a look at the cumulative GAR by each draft position since 2008-09. 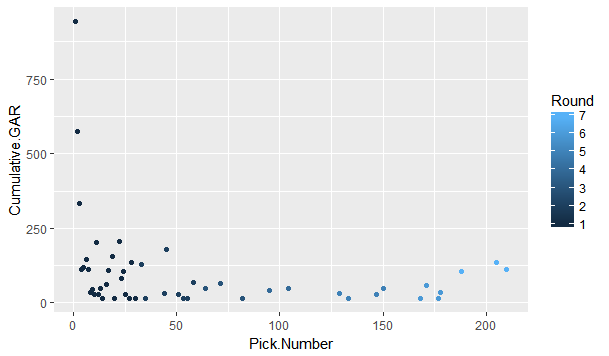 This is a rough look at what’s to come. Obviously, the 45th pick isn’t better than the 44th just because Patrice Bergeron was once drafted there, so here is the same thing smoothed. This will represent our strong link draft pick value chart. 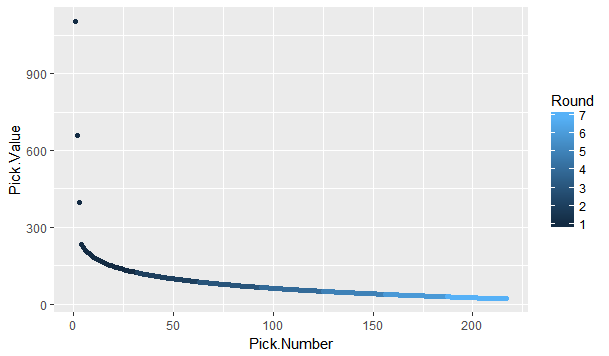 This is the approximate value of each draft pick if your only goal is to draft stars. As mentioned above, I’m not the first person to create a value chart. Traditionally, these value charts look at how each pick yields any type of NHL player, not just strong links. So what’s important about my findings is the difference between the value chart above and a more traditional one. To see the differences, here’s my strong link value chart plotted against Dawson Sprigings (DTM) draft pick value chart. 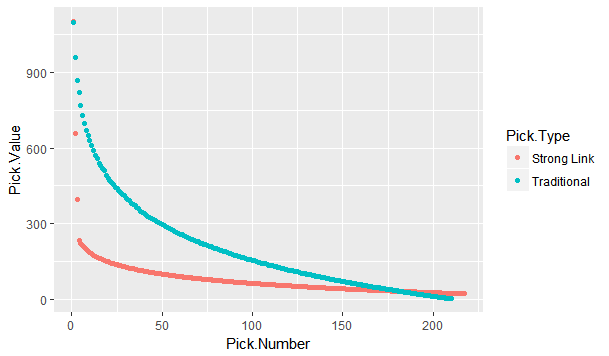 When plotted against a more traditional value chart, it’s easy to see the dramatic differences in relative pick value. DTM’s chart see’s a 12% drop after the first pick, then each drop get’s smaller and smaller from there, and relative value level’s off after the first round or so. In contrast, the strong link chart holds the top three picks to a much higher standard. Each lottery pick provides significantly more value than the next, and from pick four onwards every one is easily replaceable.

There is one very important takeaway from this value chart. The picks just outside the lottery have very little value relative to the lottery picks. Furthermore, they are very similar to the picks below it. This creates one major application because of the NHL draft lottery. Specifically referring to teams that are;

These teams should be trying to get star talent more than anyone, and they’re probably planning to acquire that talent through the draft. The problem is, bottom feeding teams that are knocked out of the top three are left with a pick which isn’t significantly better at producing the superstars than the picks after them. This brings us the biggest lesson to be learned from this exercise, don’t be afraid to get creative with your first round pick, even if it’s a really high one. The plethora of picks a team would receive in exchange for say the fourth overall pick gives them a much better chance at drafting a strong link than that singular pick. After the top three, look to trade down, prioritizing quantity over quality.

An alternative way to get creative with top non-lottery picks can be emulating Arizona last draft. Arizona, a rebuilding team traded their seventh overall pick in exchange for Derick Stepan and Antii Raanta. It’s generally frowned upon for a team in the Coyotes position to trade their first-round pick, however using the strong link value chart this looks like a fantastic trade. They still need star talent, but at pick seven they probably weren’t getting it anyway, so they flipped the pick for a first line centre and a budding star in goal. These two assets are probably going to provide more value than their lottery ticket. It takes a lot of guts to trade a pick that high, but teams shouldn’t be nearly as skeptical of doing it as they currently are. Non-lottery picks probably aren’t as valuable as people think.

Remember that these values are the approximate relative value of each pick. Not a rule-book written in stone to follow at all times. There will always be exceptions to the rule, so use this information on a case by case basis. For those interested in the individual strong link pick values, they can be found here. And finally thanks to Rob Vollman’s super spreadsheet, and hockey reference for providing the draft position data used.