The Carolina Hurricanes had another disappointing NHL season in 2017-2018. This was following an off-season where many picked them to be a surprise improver in the standings. In January, Tom Dundon bought the Carolina Hurricanes promising to make this franchise better. Throughout the rest of the season, the Hurricanes had some interesting new promotions, such as moving fans to the lower bowl to increase the atmosphere in the arena.

Now that their season has finished, the Canes have seen some big changes, like Ex-General Manager and Franchise Legend Ron Francis moving out. Last month, Dundon said the Hurricanes needed to add toughness. After a disappointing season, it is understandable to be frustrated. However, the Hurricanes do not need toughness, they need Scott Darling.

All data is from Corsica.

.@TDCanes said the #Canes need a major shakeup, saying “either the players have to be tougher or you bring in tougher players.”

This year, the Hurricanes finished sixth in the Metropolitan Division with 82 points. This saw them miss The Stanley Cup Playoffs by 13 points. Obviously, this is not near good enough for a team, and improvements need to be made. So what improvements can be made? Well, getting the second overall pick in this seasons NHL Entry Draft will help.

The consensus is they will take Andrei Svechnikov, a Russian sniper who promises to be a great goal scorer. This conveniently is something that the Canes need. You can never truly have too many good defensemen, but the Canes already have a very solid blue line with lots of young guys. Help in front will be the key.

It is clear the Canes were below average in terms of results, but what do their underlying numbers say? Advanced numbers often get misused and are often misinterpreted. No, not one stat can say whether a team is good or bad. No, just because a team has bad numbers in a game or two doesn’t mean they are bad. Advanced numbers like Corsi and xGF% and even Shot Location can help determine future success.

So, what do the Canes look like? The Hurricanes were dominant looking at underlying numbers. They ranked first in 5v5 Corsi For Percentage with 54.47%. This means the Hurricanes were often had more shot attempts than their opponents, which is generally a good thing.

In Expected Goals For (xGF%) the Hurricanes were fourth at 5v5 with an xGF% of 53.12 – yet another category the Hurricanes dominated the league. Fans should be happy about this too because it has been argued that xGF is a better predictor of future success than Corsi.

Using HockeyViz.com we can get a look at exactly where the Hurricanes are allowing their 5v5 shots from. 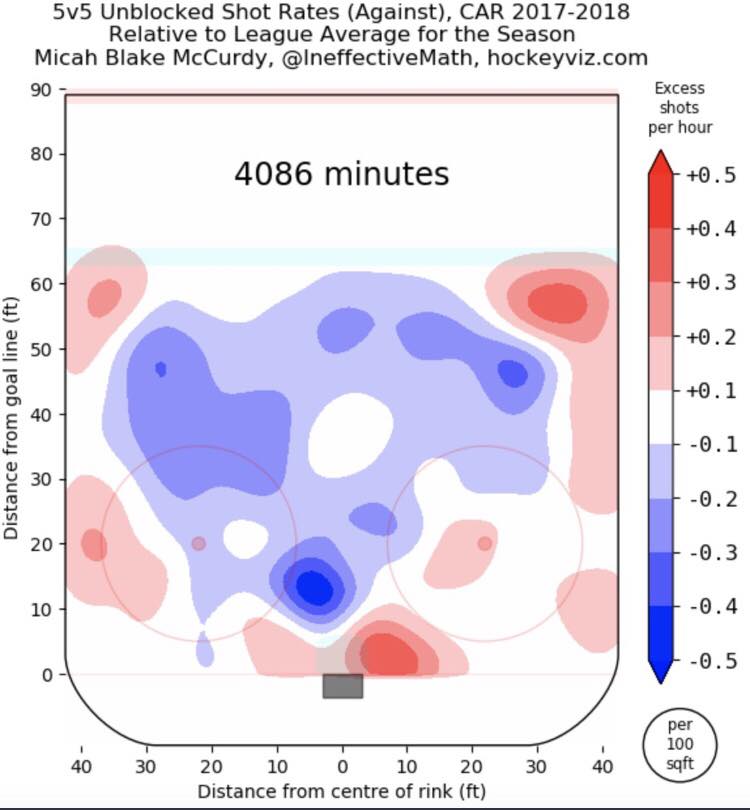 Above is the Hurricanes 5v5 Shot Location this past season. As you can see, they did a very good job of not allowing shots from the slot. This is a high danger area that many teams fail to defend. Some of the problems come when you look just to the right of the Hurricanes net. This means that they let a significant amount of shots from right to the side of their net, which can make it hard for Scott Darling or Cam Ward to stop. 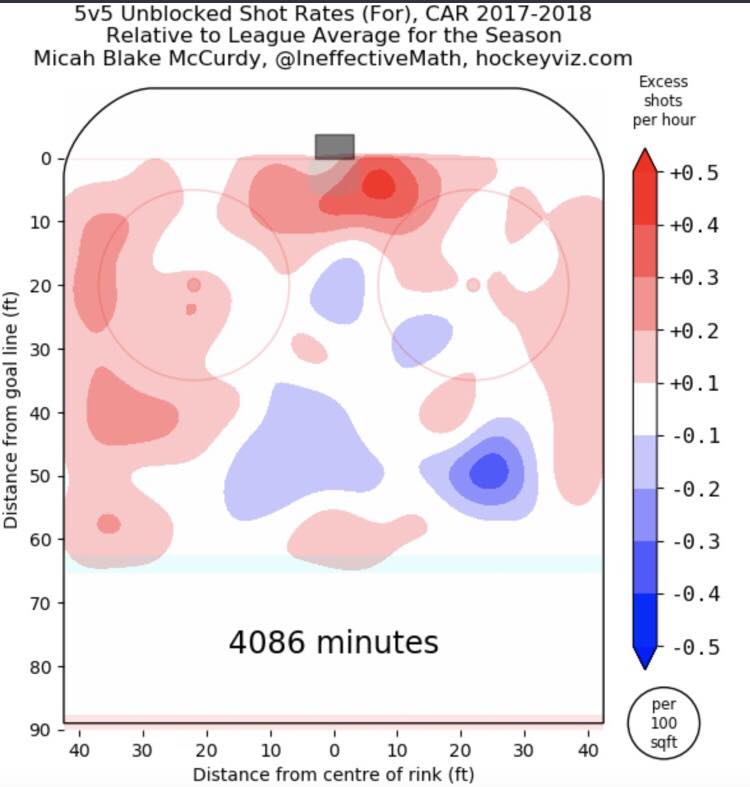 Above, is a comparison of the shots the Hurricanes take at 5v5. They have no problem creating high-danger offence and are one of the best teams in it. They ranked fourth in the league this year at creating high-danger chances. This play is provided because of speed and talent. The back end helps move the puck up, that alone makes the Hurricanes a tough team to play against.

Scott Darling, Season and Past

Last off-season, the Hurricanes realized they needed a number-one goalie. They traded for Scott Darling from the Chicago Blackhawks in hopes of finding the next Martin Jones or Cam Talbot. They needed a younger goalie with very good looking numbers as a backup.

They had good reason to do this too, in three seasons with the Blackhawks he posted a 0.936, 0.915, and 0.924 Save Percentage. Now, these were in small sample sizes playing in just 14, 29 and 32 games each season. However, if you don’t give someone a chance to be better, how will you know? They traded a third-round pick for Darling, then signed the UFA to a four-year, $16 million contract just a short while after.

This season was not a good start for Darling, however. He played just over half the year, and in 43 games he had a 3.18 Goals Against Average and a 0.888 Save Percentage. Those numbers are not pretty, and it’s easy to see why the Hurricanes had struggles this year. Cam Ward was not much better, posting just a .906 Save Percentage in 43 games.

When looking at goalies, it can be helpful at times to just look at 5v5 play. This allows goalies that have a bad team and has a bad penalty kill to show that they can’t do much about it. However, unfortunately for Scott Darling, this becomes worse. Of the 36 goalies who played at least 35 games this year, Darling ranks dead last in 5v5 Save Percentage. He also ranks 34th in 5v5 Goals Saved Above Average. These stats are clearly not what you want to see if you are a fan.

Should They Look For A New Solution?

While the Scott Darling experiment had a poor first season, it may be in Carolina’s best interest to keep him around and see if he can rebound. There are a number of reasons for this. First, while his sample size in Chicago wasn’t giant, neither is 43 games. 43 games is still a low amount to just walk away from a guy you are giving $16 million to. His sample size in Chicago was 75 games, 80 including playoffs. The Canes should give him at least one more season to see what he can do.

Overall, the Canes best option may be to bring in a better backup than Cam Ward. They need someone who can help share some games with Darling. The bottom line is that the Carolina Hurricanes were very good this season. They do not need to add toughness, they just need Scott Darling to be the goalie he was in Chicago.