Welcome back to Top Shelf Prospects, the daily column that brings you the next crop of professional hockey players. Each day I will bring you a new player profile or topical article in the lead-up to the 2018 NHL Draft. Be sure to bookmark the site, follow me on Twitter, and spread the word for the site that will bring you analytical and critical profiles and scouting reports! Last Word On Hockey Prospects is your new headquarters for everything “NHL Draft”! We have a complete listing of our draft articles here.

The 2018 NHL Draft Lottery goes down tonight. Picks 4-13 will be revealed between 7:30-8:00 pm EST, prior to the start of Game 2 of the Vegas Golden Knights and San Jose Sharks. The NHL will then force us to wait until the second intermission of the game before revealing the top three picks.

2018 NHL Draft Lottery Results (Updated As They Are Released)

All 15 teams who missed the playoffs are involved in the lottery. However, three picks have been involved in trades. The Calgary Flames pick belongs to the New York Islanders. If the St. Louis Blues pick is not a top 10 pick, it will go to the Philadelphia Flyers. Meanwhile, the Ottawa Senators must choose if they will give their 2018 first round pick to the Colorado Avalanche or wait until 2019.

The top 3 picks are up for grabs in the lottery. With picks 4-15 being the teams that didn’t win a top pick, being slotted in the reverse order of points. The odds for each team landing in each spot are as follows. 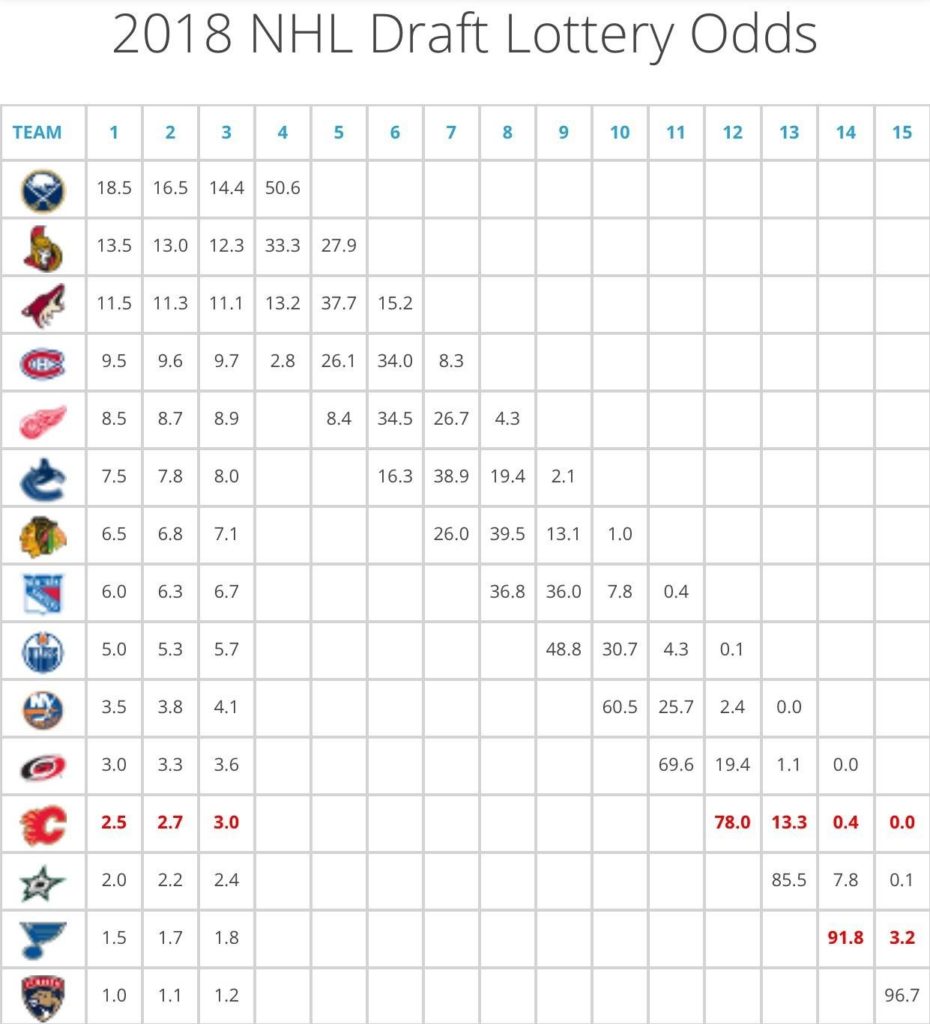 The big prize of the draft is Rasmus Dahlin, the consensus first overall pick who is seen as a generational defenceman. The second overall prospect is also a near consensus, with Barrie Colts sniper Andrei Svechnikov seen as being the clear-cut choice. While most see Halifax Mooseheads forward Filip Zadina as the third best player in the draft, there is some debate around the spot. For our full rankings and scouting reports, check out the Draft Headquarters.