The Pittsburgh Penguins powerplay is absolutely amazing this season. And to understand just how amazing it is, let’s look at their results compared to the best teams of this season as well the past.

Putting the Penguins Powerplay Into Context

With all their offensive firepower the Penguins powerplay is almost always good, but this year is truly something special. They currently have 55 goals in 340 minutes, scoring 9.75 goals per 60. To put that number into context here is how the Penguins powerplay stacks against the NHL’s best. (Data From Corsica). 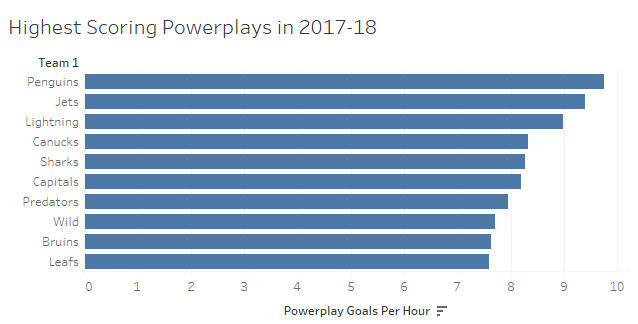 There’s a clear hierarchy in the NHL this season. In third place, there’s the Tampa Bay Lightning. Fueled by Nikita Kucherov, Victor Hedman, and Steven Stamkos the lethal Lightning powerplay falls just short of the nine-goal per hour mark. Then there is the high flying Winnipeg Jets. The Jets unit revolves around three elite right-handed shots. Lead by Patrick Laine, Dustin Byfuglien and Mark Scheifele they have redefined the way powerplays use the left side of the ice. As a result, the Jets are second in the league, scoring 9.4 goals per hour. Finally, we have the Penguins powerplay, sitting atop the NHL. Their league-leading numbers are driven by their top unit.

The Penguins are oozing offensive talent. Up and down the lineup they can score, but on the powerplay, they’re as top heavy as ever. Their first unit is the scariest in the NHL. It consists of Patrick Hornquest, Kris Letang, Phil Kessel, Sidney Crosby and Evgeni Malkin. Looking at their shot locations, it’s easy to see how they use all their elite talent. (Data From HockeyViz)

The Penguins set up in a 1-3-1 formation. Starting at the blueline, Letang is a great distributor patrolling the point. He is more of a passenger when it comes to shooting, which is where the forwards step up. The primary shot is left-handed Malkin firing from the right circle. He’s wreaking havoc on opposing goalies and is sitting fourth in powerplay points as a result. Sadly for the opposition, they can’t key in on Malkin. This is because Kessel is lights out on the left side too. Sniping all year long, Kessel leads the league in powerplay scoring while dominating the left circle. Even if teams somehow survive the onslaught from the circles, they get torched in tight.

Hornqvist makes a fantastic net-front presence. Taking punishment and banging in rebounds, he helps free up space for everyone else. While Hornqvist is good in front, it’s Crosby who really dominates. His unrivalled ability to grind shines on the powerplay. He is not afraid to drive the dirty areas, so his primary shot locations are right on the doorstep. Opposing goalies can’t handle Crosby up close, so Crosby currently sits third in powerplay points. Altogether these five lead the best powerplay in the NHL this season, so to find comparables we have to look in the past.

The Best Powerplay’s of the Decade 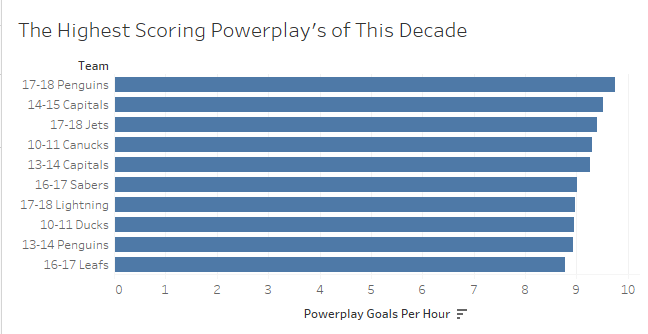 This graph is loaded with truly elite powerplay units, especially at the top. The Presidents Trophy-winning Vancouver Canucks from 2010-11 kick off the top five. Propelled by the Sedin twins in their prime, the Canucks still fall short. Then there’s this year’s Jets, who finish behind the Penguins one more time. But what’s most impressive is the Washington Capitals.

Alex Ovechkin and Nicklas Backstrom have been staples on the Capitals top unit this entire decade. Those two have made the Capitals powerplay the most consistent of this era, cracking the top five two separate times and almost making the list multiple other seasons. They have been so good the left circle is universally regarded as the “Ovi spot”. And yet no matter how good the Capitals powerplay has been, they have still found a new way to fall short of the Penguins.