The Hurricanes scored a big win over major programs by keeping top running back recruit Don Chaney home. His recruiting started very early as he received his first football offer in the eighth grade. The Hurricanes made Chaney a priority even while going through a coaching transition. After committing to Miami in his junior season, […] READ MORE

One of the biggest prizes of the Hurricanes recruiting class has made it official. The Hurricanes are adding a home run threat in running back Jaylan Knighton. Miami has made it evident that Knighton was one of their top targets all cycle and for good reason. The Deerfield Beach product rushed for over 2,000 yards […] READ MORE 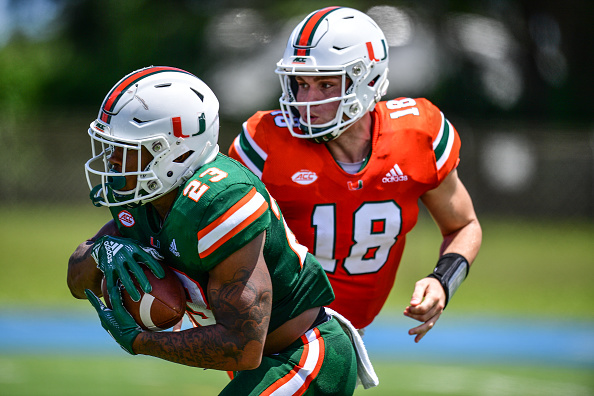 For the past two seasons, the Miami Hurricanes have failed to produce a 1,000 yard rusher. Last season former starting running back Travis Homer was named second team All-ACC despite finishing 15 yards short of the 1000 yard mark. Homer is now with the Seattle Seahawks and DeeJay Dallas is likely the new starting running […] READ MORE