Another Good Weekend For The Wildcats

If you read our preview you know draft experts expected another big weekend for Kentucky Football. In fact going into Thursday night most thought UK would break it’s modern record of six players taken in one draft which happened last year. While that didn’t quite turn out that way Mark Stoops’ club still had a big profile. Let’s take a look at who went where with our 2022 Kentucky NFL Draft Recap.

While many thought Darian Kinnard would go of the board first it was actually wide receiver Wan’Dale Robinson who went to the New York Giants with the 43rd pick.

Robinson’s one year at Kentucky couldn’t have gone any better as he set school records with 104 receptions and 1,334 yards. In addition, he reached the end zone seven times.

The Giants need help not only at receiver but their entire offense. In a 4-13 season, Kenny Gollady only managed 521 yards. Sterling Shepard hasn’t been able to stay healthy and Kadarius Toney missed seven games. As a result, the receiver position is a huge need and Robinson should make an immediate impact. Of course if he still has Daniel Jones throwing to him he may need to be a miracle worker.

A few picks later the second Wildcat came off the board. This time it was all-everything defender Josh Paschal who went 46th to the Detroit Lions.

He finished fifth on the team with 52 tackles but had a whopping 15.5 for a loss and 5.5 sacks. We at Last Word chose him as defensive player of the year. He finished his career with 137 tackles, 35.5 for a loss, and 13 sacks. In addition, he’s the only three-time captain in Kentucky football history.

With their first pick, Detroit took Michigan’s Aidan Hutchinson at number two. The combination of him and Paschal should be a great one for years to come. In fact, the NFL Network’s Charles Davis called the former Cat one of his favorite players in the draft and he should be a 10-year player in the league.

As mentioned earlier all the projections had Kinnard as the first player, and certainly offensive lineman, taken. However that didn’t happen as Luke Fortner went at number 65 to the Jacksonville Jaguars. While probably not intentional the Big Blue Nation couldn’t help that as pick 65 that’s the same number worn by his mentor and architect of the “Big Blue Wall” John Schlarman. 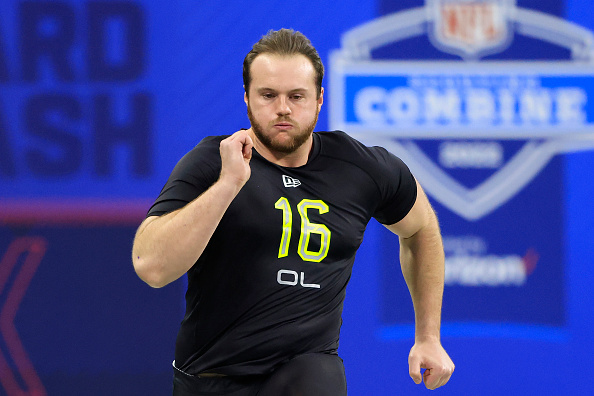 The guard turned center was someone who really helped his stock in the weeks leading up to the draft. His versatility in being able to play two-line positions certainly improved his standing. With the surprise retirement of Brandon Linder the Jags needed someone to protect Trevor Lawrence and they think they have their guy. He of course is reunited with Josh Allen who was Jacksonville’s number one pick back in 2019.

Following Kentucky’s epic Citrus Bowl win over Iowa Darian Kinnard was not only a consensus All-American but a sure fire late first round pick. Unfortunately less than stellar showings at not only the Senior Bowl with the draft combine caused Kinnard to drop considerably.

Finally with pick 145, the second in the fifth round, the Kansas City Chiefs traded up and took the UK lineman. Primarily playing right tackle Kinnard started 39 straight games for the Wildcats. In addition he became the first Kentucky lineman since Sam Ball in 1965 named an All-American.

There aren’t too many better places to be drafted than Kansas City. Not only does he get the chance to protect Patrick Mahomes but the extra emphasis the Chiefs place on the running game fits Kinnard perfectly. More than likely he moves to guard at the next level. Plus he’s highly motivated after his draft drop.

Now that we’ve gone through the four Cats picked this past weekend as we continue our 2022 Kentucky NFL Draft Recap let’s look at where other former players ended up.

Heading into the weekend three other Wildcats names were featured prominently in the late rounds of almost every mock draft. Unfortunately none of the three, Yusuf Corker, Marquan McCall or Dare Rosenthal had their names called. However each found a home as an undrafted free agent.

Corker joined Robinson with the New York Giants, McCall signed with the Carolina Panthers and Rosenthal with the Atlanta Falcons. In addition tight end Justin Rigg inked a deal with the defending AFC Champion Cincinnati Bengals, a team he worked out for. One more Cat Quandre Mosely signed with the Dallas Cowboys where he’ll be reunited with former secondary mate Kelvin Joseph.

While it didn’t turn out a record breaking draft for the Wildcats it was still a really good showing. In fact at one point UK was outdoing several top programs.

Thru the 1st 65 picks, @UKFootball has had more players drafted than the following teams:

Under Stoops UK’s had 21 players selected with 17 of those coming in the last four years. With another big season on the horizon there’s always next year to break that record. Thanks for checking out our 2022 Kentucky NFL Draft Recap here at Last Word On College Football.