Every Mountaineer Has a Role

A couple of weeks ago, we concluded our Spring coverage of the West Virginia Mountaineers. Now, we officially enter the off-season. This, we think, offers a great time to remind Mountaineer fans about the things that make being a fan so great. Over the coming weeks, then, we will offer our thoughts on the most pivotal moments in WVU football’s history. Our theme will focus on what makes this a unique fan base and a unique program. Our recent interview with Dale “Wolfman” Wolfley and Tommy “Tommy 2” Lopez influences that theme. Both talked at length about the present–and the future–of our program and State. And the best way I can narrow their thoughts down is this: every Mountaineer has a role to play.

Everybody Knows the Wolfman

If you are a Mountaineer fan, you almost certainly know the Wolfman. Wolfley hails from Orchard Park, New York. During some of the best years of the Joe Paterno era at Penn State, Wolfley recalls that Joe Paterno himself called him during halftime of a game during the first of two straight undefeated seasons to recruit Wolfley. He played up the environment and told Wolfley he could join a national championship team. On the other hand, Don Nehlen and Steve Dunlap told Wolfley that the Mountaineers were going to do something they had never done before: play for a national championship of their own. In Wolfman, the Mountaineer attitude was born.

That, of course, isn’t the ultimate reason Wolfley committed to play at West Virginia. While his brother Ron was playing for Nehlen, their father passed. Nehlen cancelled practice and flew to attend the funeral with some of his staff. That sold Wolfley. Paterno tried to change his mind with his “we’re on the biggest stage” spiel, but Nehlen flipped the script. The Old Gold and Blue from the hills of West Virginia would take the world by storm despite all the adversity the State and program had faced over the years.

Just as Nehlen predicted, the Mountaineers would play for a national championship in Wolfley’s redshirt sophomore season. With the same level of passion and smack that Wolfman still brings to his daily life, he blocked for who many consider the greatest quarterback in Mountaineer history: Major Harris. Asked about what that experience was like, Wolfman did not hesitate: “blocking for Major Harris was kind of like he is–all over the place.” 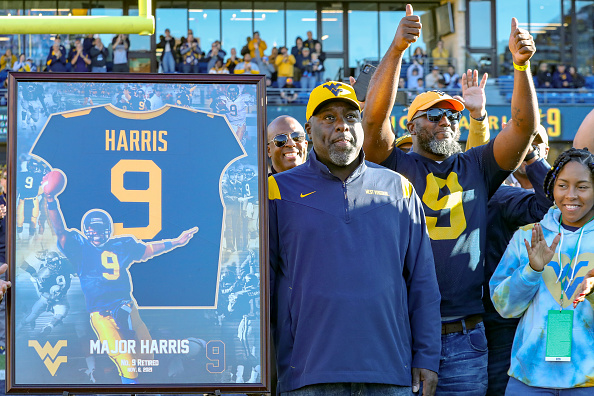 Tommy Lopez represents a lesser-known quantity, but he is a force nonetheless. Indeed, we hesitate to reveal too much. Why? Well, Wolfley and Tommy 2 are about to move forward with their long-laid plans to air the WolfMan & Tommy 2 Show on their dedicated YouTube channel. Wolfley told us that, with the show, he was going to “unleash Tommy 2 on the unsuspecting public.”

Lopez has been involved in some of the more recognizable NIL deals for Mountaineer athletes in the past year, and we are certain he will tell you all about it on their show. Whereas WolfMan is purposefully “unchained” (his words, not ours), Lopez takes a more measured approach. He is a long-standing executive in West Virginia, and his name is (whether you know it or not) behind some of the most positive developments in the state over the last couple of decades. Holding a degree from West Virginia in sports management certainly positions him to continue down this path.

As Wolfley said, “every Mountaineer has a role.” Lopez’ role in the show is to help Wolfley collaborate with and educate Mountaineer Nation on all manner of topics, from the business and economic impact of West Virginia sports on the state to the good things our nonprofit organizations are doing.

Both Wolfley and Lopez focused heavily on the phrase “what’s good in West Virginia.” That is the focus of their show, after all: to break down preconceived notions of our State and to break down assumptions and destroy rumors that float around our own fan base.

In the hour I spoke with these two, adversity remained a theme, but not in a negative way. In fact, if you bring negativity into Wolfley’s general orbit, he will swat it back quickly with his booming personality. Wolfley does not say this out loud, but we can see that he views himself as a leader in the mold of the great West Virginia leaders he followed.

With the show, both he and Lopez share a common vision. Like his blocking experience for Major, the show will be “all over the place,” both literally and figuratively. It will feature live panels (presumably with opportunities for questions and answers) of former and current Mountaineer athletes that fans can only access by subscribing to the channel. The show will go on the road and focus on some of the great charities and charitable work being performed across the State. Indeed, the first show goes on the road to the WVU Medicine Children’s Hospital.

The show will highlight business leaders, thought leaders, and moral leaders across the whole state with one common goal: to raise awareness and education–both West Virginians and not–about the positive developments and the resulting opportunities across the Mountain State.

What Does This Have to Do With Football? 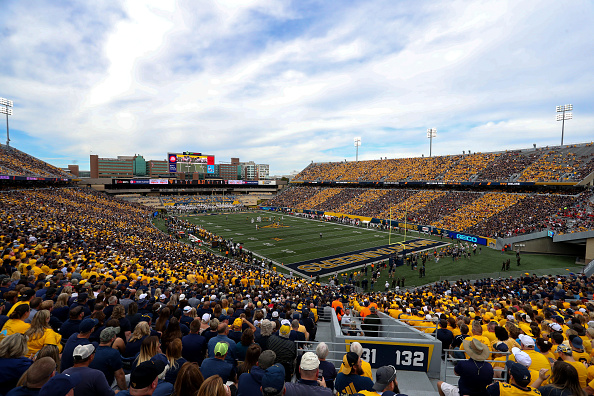 Wolfley, of course, is literally one of the most well-connected people to the West Virginia football program (and the athletics department as a whole) to whom one can speak. He also comes from what is now truly the “old school” mentality. WolfMan bided his time, taking his redshirt, and allowing his role to grow as he grew. He admits that “West Virginia has always been a team that developed its own players.”

That said, he acknowledges that this “formula is [not] going to work” any longer. As to the transfer portal and NIL, he says that we “cannot fight and battle it.” Instead, we need to adapt and change. This may represent, at first blush, adversity for our program. Wolfley disagrees even with that sentiment, though. Both he and Lopez note that West Virginia–and the Country Roads Trust–is on the forefront. Two of the best business minds in sports–Ken Kendrick (Arizona Diamondbacks part-owner and Managing General Partner) and Oliver Luck–serve on its board. He reminded us that ESPN featured it as one of the best NIL vehicles in college football. Instead of ruing the change, then, Wolfley tells us “we need to win, man.”

Against this backdrop, Wolfley laments the general malaise and pessimism taking hold in Mountaineer Nation. He directly addresses those who spread–in print and otherwise–the rank conjecture about the state of West Virginia sports and the reasons for transfers as follows: “only 10% of the stuff I read is true; the rest of these rumors are false.”

Wolfley does not make excuses. That remains firmly outside his nature. He observed, however, that Head Coach Neal Brown came to Morgantown after a majority of its top producers graduated. Working with his first Power Five program, Brown has dealt with challenges: coming into a complete rebuild, practicing in the midst of a COVID-shortened season, losing that time in recruiting, and now dealing with the sea-change brought on by the portal and NIL. Each represents adversity. Each member of Mountaineer nation has faced plenty. From the jokes from the outside world to the opioid crisis, to floods and poisoned water, Mountaineer fans all know a thing or two about adversity.

In our lives, we take it in stride. We accept it. We are even proud to carry the chip on our shoulders. Lately, though, we have not carried that same attitude into our support of Mountaineer athletics. Coach Brown, he assures us, is not taking that same attitude. Instead, he faces that adversity–as he expects his team to do–head-on. He seeks support, and he accepts that support. He enjoys plenty of great minds to lean on.

Wolfley also reminded us of the great strength of Mountaineer Nation. “The world is against us; this time we’re gonna take the world.” That was his team’s attitude when they were doubted heading into their undefeated regular season. That seems to be Brown’s attitude now.

As for rumors about the non-existent “culture problem,” Wolfley invites fans to the listen to the Country Roads Trust podcast, where fans can listen to the athletes themselves, instead of relying on rumors twice-removed.

Remember, though, every Mountaineer has a role. As fans, our role is to support this team, for bigger reasons than just the sport. Lopez took particular exception to the fans who question Coach Bob Huggins’ legacy. He spoke at length about all the good Huggins does off-the-court. For those who listen to him, he develops great young men. For the State, he donates time, effort, and money to cancer research through his foundation. Lopez stopped short of this question, but we will ask it for him: how much have these fans for Mountaineer Nation?

Lopez–the consummate professional–focused heavily on the economic impact of Mountaineer athletics on the State. The direct impact measures in the hundreds of millions (over $300 million to be exact). That money feeds families; it helps cure cancer; it funds massive improvements to the hospital system.

We surmise this from all they offered in our hour with them, but we suppose the underlying purpose of their show is to highlight all of those good things. From that, they will remind fans of their own roles in bringing good publicity to the State, to WVU athletics, and to all of the good things that West Virginia has to offer.