The 2021 NHL Draft has opted for a “quantity” approach when it comes to defencemen, instead of the “quality” approach that’s been featured in recent years. Some early rankings have double-digit defencemen going in the first round, with my own early rankings featuring eight. That’s a lot of blue-liners. And with the long list has come a lot of debate about which are actually future top-line talents. Only three or four can confidently be grouped into that elite tier.

Stanislav Svozil is among them.

All GIFs used in this article are courtesy of Czech Prospects on Twitter. They’re a great resource for everything Czech hockey and their help is greatly appreciated!

Who Even is He?

Svozil is far from a common name at this point, largely thanks to his situation. He’s avoided top-end leagues or high-end juniors and has instead risen through the ranks in the Czech Republic. This has left him a bit undiscovered by some, with Czech hockey serving more as an “end of the road” for former NHL or KHL stars than a land of blossoming prospects. But Svozil is earning his keep, even in a league that features strong NHLers of years past, like Martin Erat, Peter Mueller, and the great Jaromir Jagr.

Svozil has been a fixture of Czech hockey for years now, constantly being featured in international play. In fact, he has donned the gorgeous Czech jerseys in each of the last three seasons, dating back to when the then-15-year-old Svozil suited up for the U16 team… and scored 14 points in 16 games, the second-most of any player on the team and nine more points than any other Czech defenceman.

Svozil has a track record of appearing alongside much older competition and thriving in the role. He was even an ‘Alternate Captain’ on the U17 team last year, as a 16-year-old. With the squad, he totalled four points in six games during the World Hockey Championship and one more point in three games outside of the tournament. This was the second-highest points-per-game of any Czech defenseman on the roster and earned him a call-up to the U18 club, where he appeared in 11 games.

He’s even playing with both the Czech U20 (two points, three games played) team and the Czech international team (zero points, one game played) this season, where he’s the second-youngest on both rosters. He’s only 17.

Svozil even earned his entry to the Czech Extraliiga, the country’s premier league, as a 16-year-old. He was the youngest player in the league by far and was faced off against some of the most experienced hockey players in all of Eastern Europe. He went on to play in 41 games in the league which is… seriously, seriously terrific given his age. It was enough to earn Svozil, who turned 17 partway through the 2019-20 season, the ‘Rookie of the Year’ award in the league.

Simply put, there’s always been a track record of shattering expectations, and then racking up the points, everywhere Svozil goes. It’s clear why that’s the case when his play is broken down.

If there’s one part of Svozil’s game that stands out, it’s his ability to read the ice. He plays like he’s viewing the rink from a top-down perspective, making passes that fans can’t even find. It’s a sneaky style that makes him a seriously dangerous player to face. But, of course, this vision would be nothing without great passing to boot. And, luckily, Svozil has some great oomph behind his pass. It’s enough to make seasoned-veterans stand around guessing what just happened after he blows a pass through four guys for an easy goal. Just watch how he threads the needle on this pass:

There’s… a lot to break down there. This pass came on the back of a great rush up the ice, where Svozil dashed past the opposing forwards. Once in, he uses a great fake shot to deceive both the defenceman and the backchecking forward, before wiring a pass just-barely under the stick of the defenceman. It’s a gorgeous play; one that would make coaches swoon. It was such a bang-bang play that the main camera on the game’s stream couldn’t even follow it. Only the stationary one in the corner captured the beauty of the pass.

Svozil’s passing ability is simply gorgeous. His ability to see teammates, open lanes, and create scoring chances is terrific. And he does it all with lightning-quick reflexes that take perfect advantage of any, and every, slip up the opposition has. In this case, there’s a slight tie up off of the circle. In the split second it takes to sort this out, Svozil was able to control the puck, find a teammate, and deliver a perfect pass:

This is just… gorgeous. It seems like a simple play at face-value but the ability for Svozil to receive and control the puck so quickly, before delivering an absolute missile of a pass, is incredible. The pass was perfectly on the winger’s tape and resulted in a goal that looked too easy.

There are a lot of other strengths to Svozil’s game. He has an alright shot, he’s great in transition and an excellent skater, and he has the size and strength to be formidable in all three zones. But if there’s one other area that truly stands out, it’s his top-tier instinct. In conjunction with elite vision, Svozil’s ability to always know where everyone is is unparalleled. It’s a level of awareness that defencemen dream of having but Svozil takes it one step further thanks to some terrific hockey IQ. His ability to take his great awareness and use it to find holes in the defence or places he could sneak in is so coveted. It makes him so much more than a simple playmaking defenceman — although he does hold that title to its fullest. Svozil is also an elite scoring threat if given the opportunity to shine.

Svozil flaunted every single one of his top-end skills in this play. He read the play beautifully and found the opening, even catching the pass seamlessly on his backhand. But when no passing options were available, the 6’1″ Svozil showed off great agility and edgework. H wrapped around the net before the goalie or any defenders could react. It’s a gorgeous goal that hammers home the great mind that Svozil brings to the game. These plays are so, very common to Svozil’s game and are what truly stand him out from his contemporaries.

Praise for Stanislav Svozil is echoing through the Czech Republic right now. Andy, one half of the incredible NHL stat website Andy and Rono, spoke on Svozil saying:

“Watching him play you can say that he is one of the biggest talents in our country now. He isn’t afraid to make plays, and join the rush (he has most zone entries on his team this season amongst defencemen). He also has shot first mentality, but in his age it could probably be counted on that he is just young and doesn’t want to make mistakes walking the blue line etc. From his stats we can definitely say that he isn’t very good at controlling quantity, but he is much better in quality share. More thanks to his puck skills and offense than defense right now, but once again you have to take into context that he plays against men.”

They continued their praise by highlighting the fact that Svozil, who started the season paired with the best defenceman on his team, has since been swapped to play alongside, “one of the worst Ds in the whole league”. Despite this, Svozil has thrived; taking every chance he can to rush the puck up the ice and create beautiful opportunities for his team. Andy capped off our interview but saying bluntly:

“To sum it up… [Svozil] has the tools needed to be a modern day defenseman; being a good skater, isn’t afraid to make plays etc. And he is on a great team for his development.”

Stanislav Svozil has the mind to be a top-10 pick. He has the passing ability to be a top-10 pick. While his overall two-way game could use some work, and his stickhandling is a little below where it needs to be, his strengths so far outweigh his weaknesses. His ability to perform as a top-level playmaker, even in a professional league, even as a 16-year-old… it’s incredible.

And it’s a bit easy to piece together but, yes, Svozil’s amazing IQ and passing do make him absolutely great on the power-play as well. He’s the ideal man to quarterback the man-advantage, posing so many different threats. He could catch an opposing penalty-kill off-guard with a gorgeous pass; he could use his great skating to expose an obvious weakness, or he could use great thinking to put himself into a great scoring opportunity. He’s really an all-around dynamo in the offensive-end, thanks to a level of hockey IQ that’s only matched by players like Carson Lambos, Brandt Clarke, and Owen Power — AKA, the three best defencemen in the 2021 NHL Draft.

Svozil is an often forgotten name but deserves so much respect. He’s a top defenceman for the 2021 Draft with the looks of a future top-end NHLer. His playmaking abilities are simply amazing. Keep in mind that all of these clips were of either 16-or-17-year-old Svozil facing off against grown men; even former NHL, KHL, and European legends. And yet Svozil showed off so much talent, without creating noticeable liabilities elsewhere.

Simply put, Stanislav Svozil is a Top-10 pick in the 2021 NHL Draft. Anything less is simply disrespectful.

A huge, huge thanks go out to Andy & Rono, Czech Prospects, and Samuel Tirpák for their help with this article. 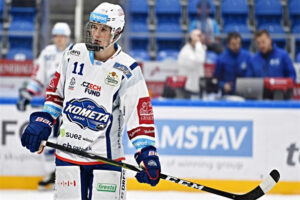