They often say defending the title is harder than actually winning it. MMA Sucka’s Dr. Paulie Gavoni and Dr. Alex Edmonds put this thought into perspective, suggesting that the mental aspect of mixed martial arts is more than likely the culprit. It’s normal for some MMA fighters to feel bad after losing a belt. However, for others, it’s not half as bad as it sounds. Take former UFC Middleweight kingpin, Robert Whittaker, for instance. 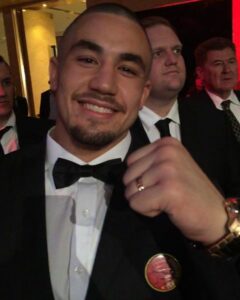 LA Times dissected how Robert Whittaker lost his UFC Middleweight title to Israel Adesanya at UFC 243 in front of a capacity crowd in Melbourne. The challenger back then, Adesanya, looked like he was on a different level than Whittaker; moving smoothly inside the Octagon and hitting Whitaker with precision strikes. It’s probably safe to say ‘The Reaper’ seem lost his last time out.

Just months after his title fight in Australia, Robert Whittaker chatted to Ariel Helwani and candidly talked about the whole experience leading up to it. He shared how he had this mentality that you have to be prepared to lose any fight, as, for him, anybody can beat anyone at any given time, especially with him being the champ and all. This in all likelihood helped him cope with the loss. As a matter of fact, Whittaker revealed that he experienced a wave of relief afterwards.

“Yeah I kind of, I didn’t really like it that much. It’s one of those things that, it comes with some pros, but the cons really starting distracting me,” Whittaker boldly confessed. “There’s a lot of media, a lot of expectations and a lot of self-imposed pressure. It didn’t agree with me super well.”

Right from the very start, Robert Whittaker has always had this laidback yet passionate approach towards fighting in the cage. He told Helwani how he liked the challenge, the struggles, and the fact that many people constantly write him off as the underdog, which is kind of similar to how a lot of fighters also deal with the pressure of the sport. A prime example would be Nate Diaz during his first bout opposite Conor McGregor in 2016.

In the UFC 196 main event Nate Diaz was written off by most fans and pundits, as he had accepted the fight with little preparation. He lacked the standard 8-week training camp, sparring rounds and detailed nutritional plan that comes with a fight camp to make sure his weight was on-point. In Coral’s feature on ‘Successful Vegan Athletes’ they highlight how the Stockton-based fighter only had 11 days preparation against McGregor. Amazingly, Diaz beat McGregor who was at that time in the prime of his MMA career. Today, Nate Diaz, like Whittaker, continues this “killed or be killed” approach to fighting, making him one of the most well liked and most marketable fighters on the UFC’s roster.

This is what separates Robert Whittaker from the rest. As impressive as his rise from underdog status to world champion is, it’s not equally as admirable as his positive outlook after suffering a loss in the cage. For him, a UFC strap isn’t really the endgame, he just wants to go in there under the bright lights, be the person that he is through and through, and beat the fighter in front of him whichever way possible. The title, according to him, is just a simple prize, a manifestation of his hard work and dedication behind the curtains.

Our very own Stephen Rivers reported on the ‘History of UFC Contenders Coming Off a Loss’, in which significant names like BJ Penn, Frankie Edgar, and even Nate’s brother Nick Diaz have all gotten a title shot following a defeat thanks to their undeniable marketability and grit. Even the aforementioned Nate Diaz, who didn’t have the most impressive resume coming into the fight with Conor McGregor, still got the opportunity of a lifetime and made the most of it.

For Robert Whittaker, he has this going for him. He has the right mindset, the perfect tools, and an impressive record that he can use as a springboard to his ascent back to the top. Who knows, maybe another title shot is on the horizon, but for now, the MMA world waits with bated breath.