Toronto FC needed a win. And they needed a bunch of help.

On MLS’ Decision Day, Toronto FC not only defeated Columbus FC 1-0 but got the help they needed to finish fourth in the MLS East Standings. With Philadelphia United losing 2-0 to the Montreal Impact and FC Cincinnati and D.C. United draw, the Reds will now host a playoff game in two week’s time.

The match was a cagey affair to start between TFC and Columbus. Both squads were nervy, looking to keep the play in the midfield. Toronto FC coach Greg Vanney said in the first half interview that he wanted his team to “have more tempo and urgency,” given the playoff implications.

The second half was a complete contrast. Unlike the first half, where Michael Bradley and Jozy Altidore could not convert on their chances, Alejandro Pouzelo saw nothing but net in the 58th minute. His 12th goal in his inaugural MLS season came from the free-kick, providing the Reds the lead that they rode to the final whistle.

The Toronto FC win did not come without consequences. In the second half, Jozy Altidore, who has seven goals for TFC this season, had to leave the game with an apparent ankle injury. After taking a hard tackle in Columbus’ end, Altidore gingerly walked over to the locker room, ending his regular-season campaign.

For Toronto FC, the 2019 season has epitomized transformation and perseverance. Coming into the year having not made the playoffs in the 2018 season, the Reds were in search of an identity and finding consistency all season long. But the resiliency and experience this team has demonstrated the last two months of the season have seen TFC go unbeaten in their last 10 games.

No better example than in stoppage time, when Toronto FC had to stop a corner kick from Columbus. Their defenders, including goalkeeper Quintin Westberg, were never phased and cleared the ball out of their own zone. Sealing the season-ending victory.

In two weeks, Toronto FC will host D.C. United at BMO Field. Two previous matches against the two clubs have resulted in draws.

Given the consistent form and hot streak Toronto FC has been on the last few weeks, expect the Reds to be marching into the MLS Playoffs with a fervent chip on their shoulder. 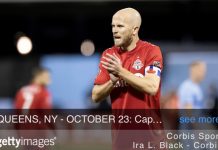