While it provides a good indication, this chart isn’t the definitive answer to who are the best defensive backs. I have to make an educated guess at each play call, which becomes harder when it’s a zone look.

The below chart also doesn’t factor in pass breakups, inaccurate throws that count as a target, or have 100 per cent accurate responsibility on blown coverages.

You can find individual players’ responsible and vicinity targets on the media section of my Twitter, @nik_kowalski. Below are my top 2019 CFL pass defenders after Labour Day. 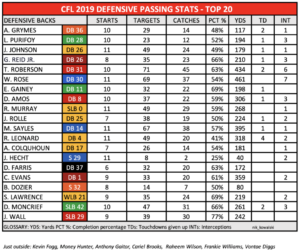