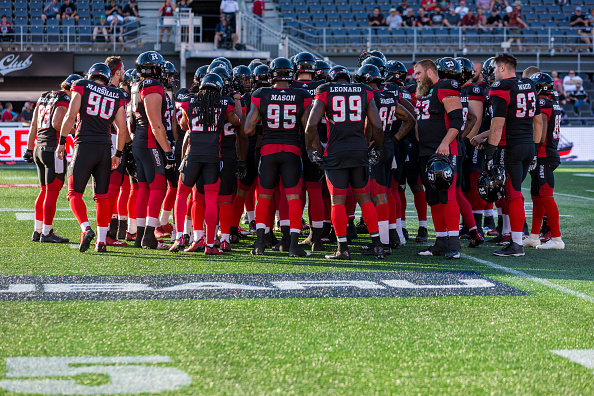 As Week 7 of the CFL schedule dawns on the Ottawa Redblacks they find themselves in first place in the East Division.

Their 3-2 record includes victories over Montreal and two Western Division opponents, namely the Saskatchewan Roughriders and the B.C. Lions. The two losses came to Calgary, a team they are happy to not see listed on their schedule for the rest of the regular season.

Those first three wins gave the Redblacks some confidence, especially after starting the 2017 season with a less than impressive record of 1-3-1 in their first five games. Yet, it is the key East Division match-ups in Week 7 vs Hamilton and five days later vs. Toronto that will determine which direction the Redblacks arrow is pointing. Add to this their Week 9 rematch with Montreal and by the middle of August Ottawa could have a stranglehold on the division or be fighting tooth and nail to avoid being bumped out of the playoffs by the Western crossover.

Redblacks head coach, Rick Campbell always emphasizes the importance of worrying more about yourself than the particular opponent each week. Essentially if you take care of your business and your individual assignments, it matters very little what the team across from you does. This has been the nature of the success of the Calgary Stampeders – Campbell developed as a coach in that system.

Here is a look at where the Redblacks grade out heading into these three key games.

The Redblacks have an explosive offence that can strike fear in the hearts of opposing defences. When operating in the hurry up they are almost unstoppable, as evidenced by their game-winning 80-yard drive against B.C. last week. Running back Wiliam Powell has put himself in the M.O.P. conversation. Quarterback Trevor Harris has moved into elite company as he sits alongside Doug Flutie and Anthony Calvillo in the category of highest percentage of career starts with over 300 passing yards.

The problem is that the Redblacks are near the bottom of the league in red-zone production and Powell has had 22 carries for a very pedestrian 67 yards in his last two games. Additionally, until Harris found receiver Brad Sinopoli in the end zone in the third quarter, the Redblacks had gone over seven quarters without scoring an offensive touchdown. Powell has been underutilized both in setting up a consistent running game and also opening up seams for the pass.

There has been a dependence going back a few years on hitch screens to the flats that result in poor production. This issue is compounded by there being little scheme development off these hitch screens. The Redblacks already stretch the field to the short flats with productive out combinations and stretch runs. All in all, this leads to 2nd-and-long situations that give all the benefit to the defence. On its own, yardage accumulation is a poor metric for determining overall offensive success. The Redblacks must finish drives with more touchdowns.

With the return of Nolan MacMillan and Jason Lauzon-Sequin, the offensive line had a good game last week in terms of pass protection. This bucked the trend that was emerging early in the season. Hopefully, this consistency along the line will continue, but until then this position group is still a question mark.

Newcomers R.J. Harris (who was with the team last year but mostly stayed on the practice roster) and raw rookie Noel Thomas Jr. have been nice additions to the receiving corps. Harris had two key catches on inside slants in the Redblacks game-winning fourth-quarter drive last week against B.C. Brad Sinopoli is off to a career year. Both Greg Ellingson and Dionate Spencer seem “off”. Their production is low and their involvement has been minimal. In Spencer’s case drops have been a problem and while Ellingson had a highlight catch on a ball thrown behind him last week, he has lacked the usual “wow” factor. For Ottawa to claim the division crown in November they need these two key cogs to get going. The issue here seems more to be trying to do too much.

The defence has done a great job despite being on the field for too long. In both losses to Calgary, the defence did very well considering the field position they had to work with against the high powered Stampeders offence. The wins against Saskatchewan and Montreal were marked by a tenacious in-your-face defensive attack that is the hallmark of a Noel Thorpe system.

The worrying trend is that the Redblacks are now in the bottom half of the league in sacks and their secondary is prone to the big play.

Last week against B.C., the Redblacks had the Lions backed up on their own 18-yard line with 2:53 to play and the game tied at 22. The Lions completed a 78-yard pass and run to Emmanuel Arceneaux on 1st-and-10 which immediately put the Lions in the red zone. The issue was not so much this one particular completion, even though it almost cost them the game, it is the regularity with which it happens. Good secondary coverage does not stand on an island, it’s a symbiotic relationship with defensive line pressure. While Avery Ellis, A.C. Leonard and Mike Wakefield have done a good job on the pass rush the Redblacks lack the game-changing rush end that other teams possess. National defensive tackles Micheal Klassen and Daryl Waud have done very well against the run but their ability to get up the field pressure on the pass is negligible.

The Redblacks will make a change this week as they will employ an all international (ie American) starting defensive line as George Uko comes in at defensive tackle. This change affects the ratio and forces Ottawa to start University of Calgary product Austen Hartley at wide receiver over R.J. Harris.

In terms of secondary personnel, the Redblacks cut free agent acquisition Josh Johnson prior to the B.C. game and moved rookie Anthony Cioffi into the SAM spot. Cioffi acquited himself well but one is left to wonder whether Louchiez Purifoy would be better in that position given his experience playing that spot while with the Lions? Then again the Redblacks are low on corner depth so the coaching staff may have felt their hands were tied.

Rookie and University of Ottawa product Lewis Ward has done a great job exclusively as the kicker for field goals. He went five for five last week with two of the kicks coming from outside the 40.

Richie Leone has done a masterful job at directional punting and also launching deep bombs. He has kicked the Redblacks’ offense out of trouble a number of times.

The coverage teams have been consistent all year. Led by the likes of Andrew Marshall, Dan West and J.P. Bolduc they have given the coaching staff confidence that the opposing offence will start with a good swath of the filed to move down.

Saturday’s matchup with Hamilton has all the makings of a classic. The Tiger-Cats need a win after dropping their last two contests and Jeremiah Masoli is keen to show that he deserves the title of undisputed starter. The Redblacks look to put together a full sixty minutes for the first time this year.

After Saturday’s tilt, the Redblacks have a quick turn around before returning to Southern Ontario for a matchup with the Argos on Thursday, August 2nd. Depending on the result of the Argos game against Winnipeg this week, the Argos will be nipping at the Redblacks heels or will be in a must-win position to keep pace with Hamilton and Ottawa.

Divisions are not won in late July and August but the Ottawa Redblacks have the chance to hedge their bets in the East Division over the next few weeks.