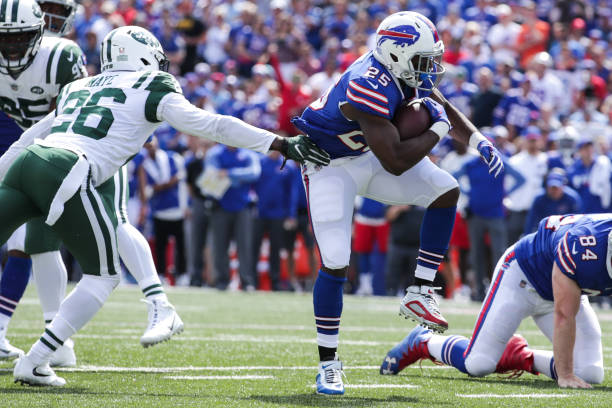 The Sean McDermott era got off to a positive start with the Buffalo Bills earning a 21-12 victory over the New York Jets in Week 1. It moves Buffalo to first in the AFC East for the time being after the New England Patriots fell on Thursday night and the Miami Dolphins game with the Tampa Bay Bucs postponed due to Hurricane Irma. McDermott becomes just the third head coach in franchise history to win on his debut with the team, joining Marv Levy and Rex Ryan.

Sunday’s triumph featured standout players and left in its aftermath overarching themes. Which of these are the most important elements to take away from the game? Three things stand out.

LeSean McCoy Did Pretty Much Everything Except Find the End Zone

Heading into this game, LeSean McCoy‘s workload became a trending topic after McDermott’s comments to the media earlier in the week. He essentially hinted that he’d have no problem having the veteran running back in the game on every single play. While that certainly seemed hyperbolic, McCoy did see plenty of action on Sunday.

In the end, McCoy made quite the multifaceted contribution to the Bills offense. He was his usual self in the run game, carrying the ball 22 times and finishing with 110 rushing yards. It included a long of 27 on the first play of the fourth quarter. That paved the way for Buffalo to eventually score four plays later, as fullback Mike Tolbert punched it in from one yard out.

But McCoy also showcased his ability to catch passes out of the backfield. He finished with 49 receiving yards on a team leading five receptions, with Taylor targeting him six times. It didn’t take long for Shady to demonstrate his razzle-dazzle after the catch as well. Less than two minutes into the first quarter, this happened.

Having a player of McCoy’s caliber who can feature in the Bills short and intermediate range passing game takes a lot of pressure off of Tyrod Taylor. That versatility needs to remain for the Bills to realize success on offense this year.

Buffalo’s defensive backfield underwent a significant overhaul in the off-season. The team signed two safeties via free agency, bringing in Micah Hyde and Jordan Poyer from the Green Bay Packers and Cleveland Browns respectively. To make up for the loss of Stephon Gilmore, they picked Tre’Davious White in the first round of the 2017 NFL Draft. They also made a late move in trading Ronald Darby to the Philadelphia Eagles and picking up E.J. Gaines from the L.A. Rams.

If their performance in the season opener is any indication, this group is going to do special things. Poyer and Hyde both came away with interceptions of Jets quarterback Josh McCown. In the latter’s case, it took place with under two minutes to go in the game and helped erase any hopes of a late comeback for the visitors.

White and Gaines also put together impressive performances in their respective Bills debuts. The rookie out of LSU nearly had an interception of his own in the third quarter and broke up a pass in the end zone on second and goal later in the game. Gaines finished second among corners with five tackles, one behind Leonard Johnson, himself among the new faces in the Bills secondary.

Buffalo dealt with myriad issues defending the run in 2016. Only three other teams allowed more rushing yards and only the San Francisco 49ers gave up more touchdowns on the ground. Though Sunday’s effort may have to come with an asterisk considering the expectations surrounding the Jets, it was an impressive one nonetheless.

Neither Matt Forte nor Bilal Powell showed any effectiveness at running the ball on Sunday. They combined for 13 carries and a measly 38 rushing yards, averaging 2.9 yards a pop. It put the Jets in disadvantageous situations on third down all day, with the team facing third and fewer than five yards just four times.

Once again, this Jets run game isn’t exactly anything to write home about. Forte is clearly showing the fact he’s on the wrong side of 30. And after rushing for 122 yards in the last meeting between these two teams in last year’s regular season finale, Powell came crashing back to Earth big time with Sunday’s performance. But McDermott and defensive coordinator Leslie Frazier have to be pleased at this showing from a Bills run defense looking for noticeable year-over-year improvement.