Via Last Word on College Football by Walt Johnson

The University of Alabama Crimson Tide’s 2017 fall camp has been typically hot and tough. And don’t tell Coach Saban, but this year’s team is widely reported to have had an extremely impressive August— even for Alabama’s standards. As usual, the loss of multiple players to the NFL on both sides of the ball has left a number of hotly-contested open spots on the field. And again, just as in years past, a number of the players vying for playing time are true freshmen and sophomores with little to no game experience at the college level. As such, it is particularly impressive that these 10 UA Freshmen & Sophomores are poised to impact games early and often for the 2017 Crimson Tide.

We will not have to wait long to see the extent to which Saban really trusts these guys and how they fare if/when their number is called. In case you’ve been living under a rock, Alabama opens the 2017 season with an enormous matchup with the Florida State Seminoles, in a week one game that almost definitely will have playoff and national championship implications.

Last year’s SEC Offensive Player of the Year has grown tremendously as a passer and all-around quarterback this offseason. A main factor in Hurt’s improvement has been the tutelage of Bama’s new offensive coordinator and quarterbacks coach– Brian Daboll. Jalen Hurts espouses uncanny comfort while standing tall in the pocket, waiting on the play to develop. He’s also the nexus for authentic team chemistry. Having Hurts step up as a leader is more important than ever considering the number of young, talented players that will be filling positions this year. So after establishing himself as a player mature beyond his years throughout 2016, people expect Hurts to be a leader for this team. But while there is little to question about this young man’s character and football IQ, an area in which he did not exhibit effortless control over last year was passing accuracy.

However, many around the league, including other SEC quarterbacks, see immense potential in Hurts as a pure passer. This raw talent, in conjunction with tireless work in the offseason, ought to lead to a breakout year as an all-around great quarterback in 2017. And the fact that we have yet to see last year’s SEC Offensive Player of the Year “breakthrough” ought to be extremely scary for opposing teams.

A redshirt freshman, the team’s most recent data lists Deonte Brown at 6-foot-4, 350 pounds — which is about 25 pounds lighter than he was during the 2016 season. In fact, following the loss in the NCG, the coaching staff specifically spoke with Brown about the need to lose weight and improve his stamina. Brown’s hard work and willingness to do whatever is asked of him to help the team are extremely good signs for the Bama faithful, as this young man’s talent level was never a question. And now that he has proven to be a team player with a willingness to completely respect and obey the coaching staff, he has the potential to be the next great Bama lineman.

Furthermore, consistent with the tide coaching staff’s propensity to move players around on the offensive line giving players the chance to learn more than just one position, Brown has been seeing time at both right and left guard, as well as tackle– which is ultimately just another example of his willingness to adhere to the expertise of the coaching staff and trust that they will maximize his potential. 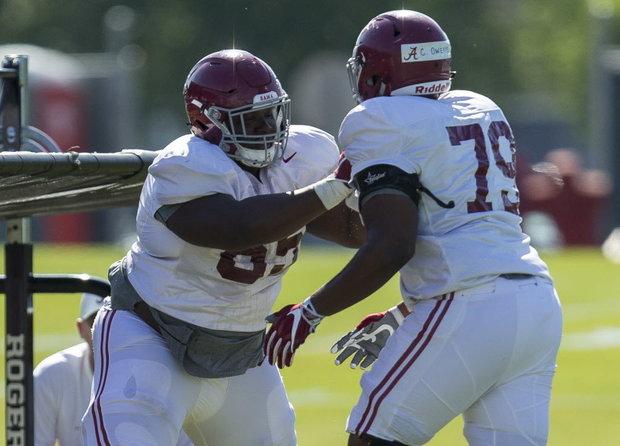 College football fans are well aware of this true freshman’s innate talent and football savvy. As last year’s number two overall recruit, it was widely believed that Harris could have started at virtually any school in the NCAA.

In a “problem” specific to only Alabama, an issue may be finding playing time for Harris. With the likes of those Scarborough, Damien Harris, Josh Jacobs and fellow freshman recruit BJ Emmons, Harris had his work cut out for him. But a successful spring, summer and fall has put Harris in a position to contribute as a true freshman for Alabama.

Harris has worked to become a well-rounded, diverse back. Specifically he has polished his ability to block, catch out of the backfield, run up the middle on short yardage situations, and use his uncanny speed to break long touchdown runs. The true freshman’s playmaking potential as seen through his off-season body of work gave coaches numerous glimpses into the 18 year old juggernaut’s freakish ability. That being said, the only question is whether the depth at RB makes redshirting Harris the smart decision.

This question was likely answered during Alabama’s open practice on Saturday, when Harris decisively exceeded his previously-considered untenable game-changing ability. In one particular example of pure dominance, the 6-foot-2, 225-pound Harris juked cornerback Tony Brown near the sideline after catching a pass in the flat and then got by linebacker Mack Wilson with a juke after grabbing a short pass over the middle. Shortly afterward, Harris beat Wilson badly on an inside-breaking route over the middle, caught the pass and took it to the end zone. 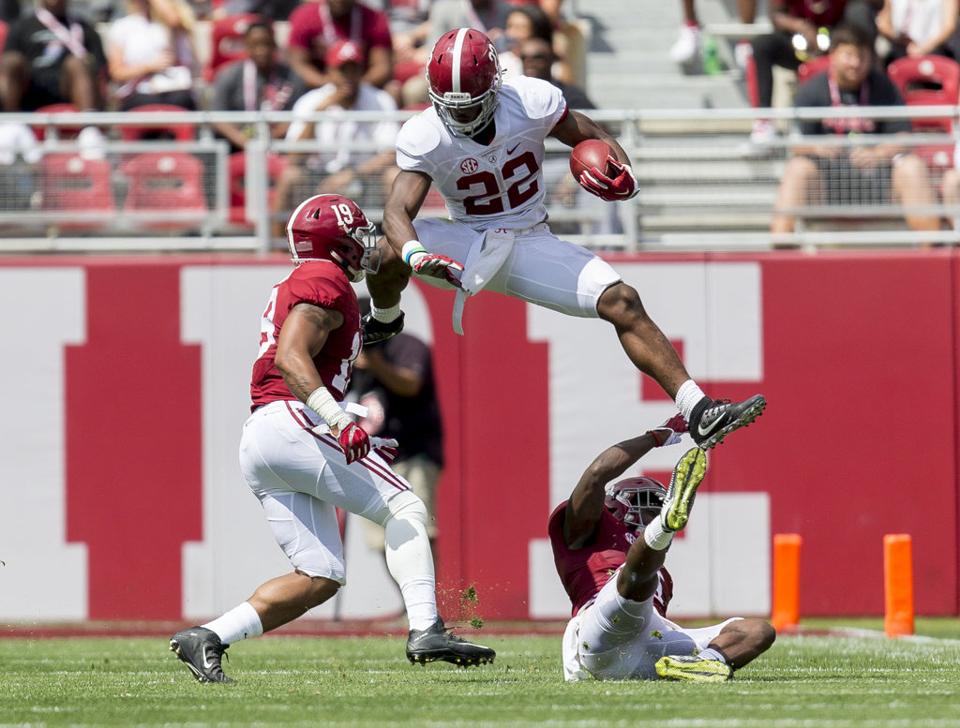 Josh Jacobs seemingly came out of nowhere to become an important piece of the 2016 Alabama offense. It has become increasingly clear that the sophomore is very versatile and capable of making plays both as a runner and as a pass-catcher. But the Tide’s plethora of talent at the running back position is extraordinary. As such, it will be Jacobs’ ability to excel in niche areas of the game that will determine his amount of playing time.

Joshua Jacobs runs for a first down during the first half of the National Championship.  Jan. 9, 2017, in Tampa, Fla. (AP Photo/Chris O’Meara)

At running back, a glance at Bama’s receiving depth chart reveals a whole lot of talent– both experienced and inexperienced. A member of the latter group, Jerry Jeudy stood out during the A-Day Game and Fall practice.

In particular, the five-star true freshman has been a consistent route runner and playmaker this offseason. Furthermore, his ability to get open and elusiveness will make Jeudy a significant factor in 2017. 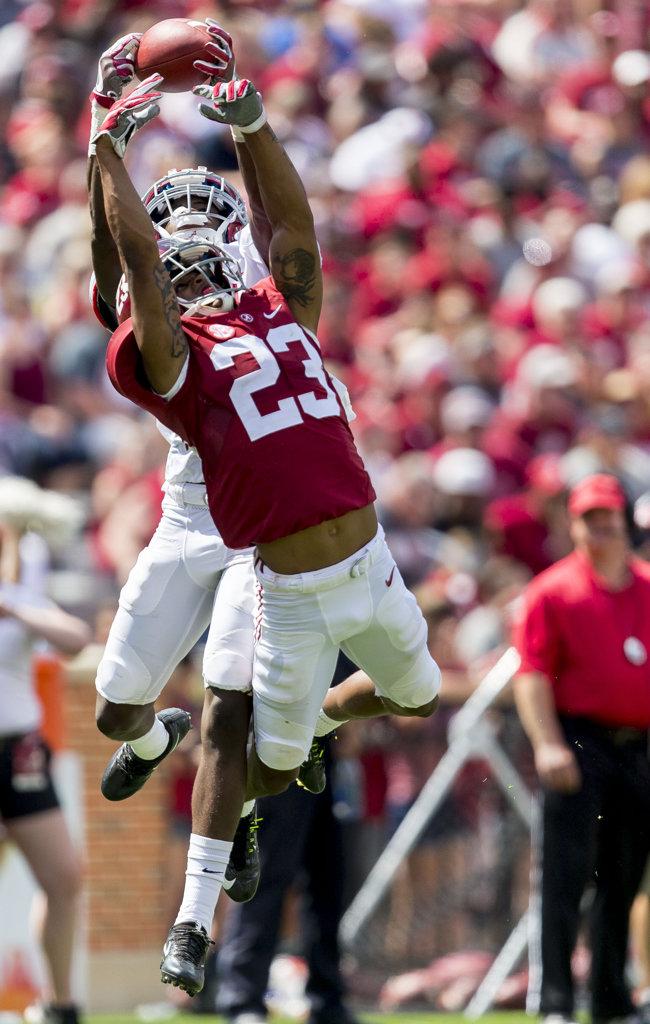 Alabama wide receiver Jerry Jeudy (4) makes a fingertip catch over Alabama defensive back Aaron Robinson (23) for a touchdown during the first half of Alabama’s A-Day 2017 spring football game, Saturday, April 22, 2017, at Bryant-Denny Stadium in Tuscaloosa, Ala. Vasha Hunt/[email protected]