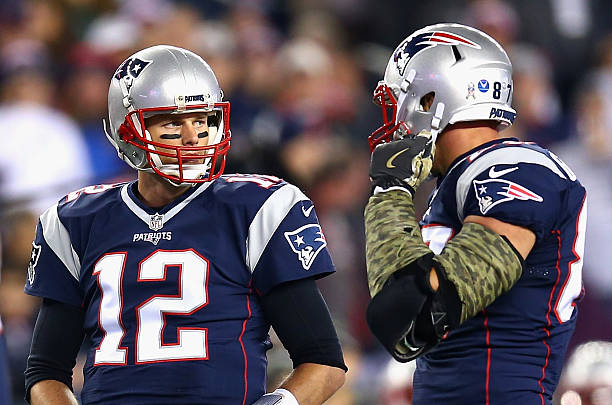 During the month of August, Last Word on Pro Football will be breaking down the top positional units in each division. For this article, the best players on offense in the AFC East is the focus. This breakdown will consist of the “best” at each position followed by the “rest” in descending order.

When it comes to quarterback in the AFC East, there’s no doubting that the undisputed king is Tom Brady. In Super Bowl LI, he further cemented his legacy as one of the greatest to play the position by leading the Pats to a historic come-from-behind victory over the Atlanta Falcons. Brady has more Super Bowl rings, Super Bowl MVPs and playoff wins (among other things) than any other quarterback in NFL history. Though he’s now in his 40s, Brady shows no signs of letting up. “Father time” may be undefeated, but in Brady’s case that victory seems like it will come via a 65-yard field goal in the dying seconds of overtime.

There are myriad questions surrounding the Bills receiving corps after losing Sammy Watkins to the Rams and Anquan Boldin to retirement. But don’t let that take anything away from Tyrod Taylor. Compared to Jay Cutler, who recently signed with the Dolphins, Taylor’s put up more impressive numbers over their past two full seasons (Cutler only played in five games last year). He has twice as many wins (14) and 17 fewer interceptions (12) than Cutler over that span. Regarding the other team in the division, let’s just say that their quarterback situation is uncertain at best and a hulking grease fire at worst.

There have been rumors circulating recently about LeSean McCoy‘s future in Buffalo. Those rumors circle around him possibly being on the trading block as the Bills look to stockpile draft picks in building for the future. But as of right now, he’s a part of this team moving forward and is clearly the best running back in the division. Last season, he spearheaded the Bills league-best rushing attack, gaining 1,267 yards on the ground and adding 13 touchdowns. Though he’s approaching 30 and will likely eclipse 2,000 career carries in 2017, all indications are that he reprises his role as the bell cow back this year.

McCoy may have some competition in Miami for top dog, though. Jay Ajayi enjoyed a breakout campaign last season and will be out to prove it wasn’t a fluke. Though his three games of 200+ rushing yards were impressive (only four other running backs in NFL history achieved the feat), he needs to show more consistency this coming season. Running back is about the only bright spot for the Jets on offense with two relatively proven players in Matt Forte and Bilal Powell. It’s why they slightly beat out the Pats whose returning running backs (Dion Lewis, James White and D.J. Foster) combined for 473 yards last year. New additions Mike Gillislee and Rex Burkhead are intriguing, but questions remain as to whether they can fill the void left by LeGarrette Blount.

Ryan Tannehill‘s season came to a premature end (well, it never even started to be honest) when the Dolphins announced he’ll undergo surgery to repair the knee injury he re-aggravated in training camp practice. His replacement in Cutler won’t be worse for wear when it comes to targets to throw to. Jarvis Landry is a quintessential PPR darling who finished top ten in receptions the past two seasons. DeVante Parker and Kenny Stills combined for 1,470 receiving yards and 13 touchdowns last year. If Cutler can lay off on the poor decision-making that’s defined his career, this receiving corps really has a chance to shine.

Any time you’re catching passes from a player of Brady’s caliber, it elevates your game. But in Julian Edelman, the Pats have a true talent who, even at 31, continues to be one of the NFL’s most dangerous slot receivers. Adding Brandin Cooks, who had a career high 1,173 receiving yards for the Saints in 2016, should also help. The Bills receiving corps is in complete disarray with the departure of Watkins, Boldin’s retirement and Jordan Matthews‘ sternum injury. But they do have a promising rookie in second-round pick Zay Jones. Buffalo’s situation at the position is much more certain than the Jets, that’s for sure. With Quincy Enunwa done for the year, Robby Anderson is the new number one. He totaled 587 receiving yards and two touchdowns last year.

It’s fairly easy to have the Patriots at number one both at quarterback and tight end. For the latter position, however, it comes with a bit of a caveat. Yes, there are few tight ends in the NFL with the total package skill set Rob Gronkowski possesses. But heading into the eighth year of his pro career, the biggest question mark surrounds his ability to stay healthy. Gronk has missed at least five games due to injury in three of his previous seven seasons in the league. It included playing in just half the Pats’ games last year.

Heading into the 2017 season, Gronkowski is undertaking a new approach he hopes will consistently keep him on the field. It includes trying to follow the example of his quarterback from a dietary standpoint. Though he was absent from the Patriots’ Super Bowl run last year, he’s shown how much of a weapon he can be in January. Gronk has a total of nine touchdown receptions in the postseason. If him and new arrival Dwayne Allen can gel within the framework of the Pats pass game, it only enhances their hopes of making it to Minneapolis for Super Bowl LII.

Elsewhere in the division, the Dolphins’ acquisition of Julius Thomas vaults them into second. Though Thomas had two lean years in Jacksonville, he isn’t too far removed from consecutive years of double-digit touchdown catches while with the Broncos. In his first two seasons with the Bills, Charles Clay has averaged 530 yards receiving and totaled just seven touchdowns. That’s hardly the production expected out of the seventh highest paid tight end in the league. But bringing up the rear at this position is the Jets, who got 173 receiving yards from tight ends last year. And their only free agency acquisition, Chris Gragg, is on a one-year, $690,000 deal.

Keeping the pressure from opposing pass rushers away from Brady will garner ever-increasing importance now that he’s hit the big 40. Bill Belichick knows this and has assembled a formidable collection of offensive linemen in front of him. With the exception of left guard Joe Thuney, every starter on the line (Nate Solder, David Andrews, Shaq Mason, and Marcus Cannon) received a top-30 grade from Pro Football Focus last year. In a division where all three opposing teams boast plenty of talent on their respective front sevens, this unit needs to continue performing at a high level.

The Dolphins O-line showed massive improvement in keeping Tannehill upright last year. They’ll have to do the same with Cutler under center in 2017. And of course, providing clean gaps for Ajayi in run blocking is another key component to a repeat playoff appearance. In contrast to the Dolphins, Buffalo’s line regressed in pass protection. They allowed 46 sacks which ranked as the league’s fourth worst total last season. Still, the unit is partly responsible for the Bills leading the league in rushing. For the Jets, they have two decent guards in James Carpenter and Brian Winters. But their other expected starters (Kelvin Beachum, Wesley Johnson and Ben Ijalana) received an average grade at their respective position of 48 from Pro Football Focus in 2016.

Be sure to check out the top positional units in the AFC East on defense and special teams.