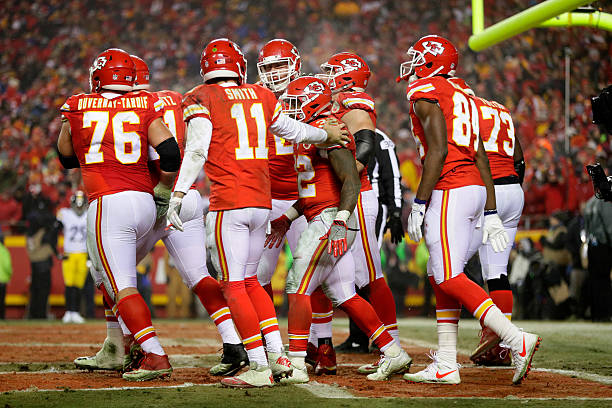 From Last Word On Pro Football, by T.J. Randall

The Kansas City Chiefs jumped 17 spots in the 2017 NFL Draft to select Texas Tech quarterback Patrick Mahomes, their first round pick at the position since 1983. At 33 years old with only two years left on his contract, current starting quarterback Alex Smith is eye-to-eye with the beginning of the end. A potential quarterback controversy is the horizon as we conclude the AFC’s portion of our newest series, “The Breakdown.”

The Breakdown: A Look at the Kansas City Chiefs Schematic Philosophy

Head coach Andy Reid has immersed himself amongst the West Coast Offense legends, hence why I believed North Carolina’s Mitch Trubisky would be the ideal fit for his system. Nevertheless, I had Mahomes graded higher and still feel that he will provide the Chiefs a greater return on investment in the long-term as he is athletically and mentally ready to lead this Chiefs’ offense and excel where Smith falters.

Mahomes operates with a gunslinger’s mentality whereas Smith plays as though he’s trying to not make a mistake, often shying away from tight windows as the throws get longer and opting to declare himself a runner when he has time to double back across the field or travel the circumference of the pocket. The former shines in such areas, and has the undisputed arm talent to take calculated risks down the field and extend plays via his athleticism. This is vital to an offense with an elite athlete in Tyreek Hill and playmaking tight end in Travis Kelce.

Conversely, Reid’s system doesn’t call for a superstar quarterback. Kansas City relies on both designed screens and quick perimeter throws that essentially act as long handoffs to supplement the run game. Such a system is also non-dependent on big-time wide receivers due to both Hill’s home run capabilities and Reid’s play-design that can manufacture open opportunities for others and defeat specific coverages. Having a tight end as athletic as Kelce is incredibly beneficial as well. It enables the Chiefs to isolate him on the backside, drawing subpackage looks that create lighter boxes for the run and keeping him in-line to draw base coverage looks. Kelce has also proven to be the beneficiary of Reid’s cerebral approach.

Because the West Coast Offense is Reid’s core system, these extensions of the run also symbolize the short, efficient throws upon which this timing-based system is predicated. It’s certainly not uncommon to see running back Spencer Ware featured in the screen game, while carrying two fullbacks is indicative of their reliance on gap-scheme runs. Smith’s athleticism and Reid’s design prowess are also assets in play-action where these short, catch-and-run throws can thrive.

A Variety of Defensive Alignments

Defensive coordinator Bob Sutton has manned the Chiefs’ defense since 2013 and has unquestionably established a dominant unit with quality talent at all three levels.

The Chiefs operate from a base 3-4 with talented pass rushers Justin Houston, Tamba Hali and Derrick Johnson working from the second level and forming quite possibly the NFL’s top trio of linebackers. When you add defensive backs Marcus Peters and Eric Berry to the equation, the defense’s flexibility grows exponentially. There is also quality talent behind Peters and Berry in the defensive backfield which ultimately creates what makes the Chiefs so successful: variety.

Their deep defensive back unit leads to many nickel and dime packages that both feature different alignments between the first two levels as they work to confuse the heck out of offenses. When a defense operates with this level of multiplicity, the more efficient their disguised coverages and blitzes become. What’s more, playing with only one or two down lineman, the result of nickel and dime packages, allows Sutton to send the entire trio of aforementioned pass rushers on simple four-man rushes or the designed blitzes his man-heavy scheme is built upon. Regardless, the threatening pass rush the Chiefs have established during Sutton’s tenure leads to premature attempts from pressurized quarterbacks while a talented, numbers-advantaged secondary awaits.

Kansas City has also become dependent on their safety play. When healthy, Berry is the ideal fit for Sutton’s base Cover 1 defense that asks his corners to press along the perimeter and his front seven defenders effectively handle their blitz responsibilities. These man-free concepts put the stress of the single-high defender to handle duties both over the top and from sideline-to-sideline, but Berry is more than adept at playing with the requisite level of aggressiveness and reactive awareness.

I’ve mentioned that the Raiders are the top dog in the AFC West. But the Chiefs had their number both times last season and have kept both systems intact. It’s going to be a tight battle across the division and the Chiefs have the pieces to challenge across the conference.