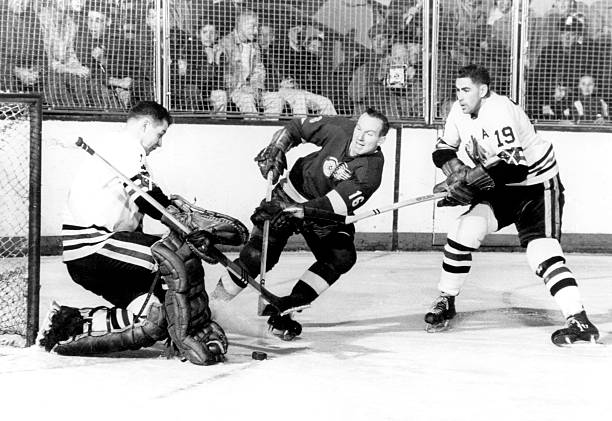 The History of Trade is a mini series going through each team’s best and worst trades of all time. Each team has their own history and some may cross over, but the series will try to stick to each team. This article will focus on the Chicago Blackhawks trade history, finding the best and worst of all time.

The Windy City has had their fair share of NHL legends to cheer for. In fact, 17 of the 100 greatest players in NHL history pulled on the Blackhawks jersey at one point or another. With some of the greatest players skating through, inevitably they are talked about in some of the best and worst trades in the history of the league.

Chicago has had its fair share of great trades. They managed to sneak Chris Chelios out of Montreal and also bolstered Cup runs with the acquisitions of Kris Versteeg and Patrick Sharp. But their best trade in team history may not have been a skater after all.

The Detroit Red Wings front office may have forgotten to do their research before making this trade. Bill Preston, for instance, never managed to play a game in the NHL prior to or after the trade. He may have been the biggest disappointment from the trade but the rest of the return was not much better.

After arriving from Detroit two years prior, Johnny Wilson was sent back to be a goal scorer for the Wings. Unfortunately for both him and the organization he never managed to eclipse the 12-goal mark. He was sent off to the Toronto Maple Leafs two years later with Frank Roggeveen for Barry Cullen.

Forbes Kennedy wasn’t able to make an impact for the Red Wings either. After finishing fourth in Calder voting in 1956-57 Kennedy was sent to Detroit in hopes he would continue to produce. His first season showed a strong case that he might, as he put up 11 goals and 16 assists. Somehow the next season Kennedy managed to fall off a cliff with his production. He only managed to put up five points in 67 games, while racking up 149 penalty minutes. After two more shortened seasons in Detroit Kennedy was sent to the Boston Bruins for Andre Pronovost. Kennedy would have some success in Bean Town, putting up 30 points his first year. He also managed to lead the league in penalty minutes in 1968-69 as part of both the Philadelphia Flyers and Toronto Maple Leafs.

Hank Bassen, the other goalie in this trade, was by no means the worst part of this trade for Detroit. His first season with the Wings saw him post a 2.93 goals-against-average and 13 wins. The down side, that was his highest win total in his six years in Detroit. He was traded to the Pittsburgh Penguins in 1967 for Roy Edwards. Edwards would go on to play six seasons in the Motor City, winning 95 games with the team. Bassen would only play one season in Pittsburgh before retiring.

Jack Adams had his say in many big trades in Detroit’s illustrious history. But this trade may have just been him trying to break ties with a player he no longer liked. Ted Lindsay was part of the heart and soul of the Red Wings. A member of the famed “Production Line” with Sid Abel and, of course, Gordie Howe, Lindsay was a force to be reckoned with. He was captain four years prior to being traded. But, after trying to establish a players union, he was stripped of his captaincy and sent to bitter rivals Chicago. While in Chicago, Lindsay still had success, but never to the level he had as a member of the Red Wings. He racked up 79 points across three seasons in The Windy City before retiring after the 1959-60 season.

Along with the legendary Lindsay, the Blackhawks managed to get the young goalie Glenn Hall. Over 60 years have past since this trade and looking back now, Hall is clearly the biggest player that switched teams. His four seasons in Detroit prior to the trade were a good indication of what was the come for the young prospect. After playing in only eight games across the 1952-53 and 1954-55 seasons, Hall emerged as the starting goalie for Detroit. He would go on to win 30 games while finishing second in Calder voting that season. After another year with 38 wins in Detroit, Hall became the focal point of the trade. He would never look back from there.

Hall would go on to win 275 games in Chicago across ten seasons. Possibly the most amazing stat is that Hall managed to never have a goals-against-average higher than 2.97 in his entire career. Hall was claimed by St. Louis in the 1967 Expansion Draft. He would go on to be the co-winner of the Vezina Trophy two years later. Hall would finish his career after the 1970-71 season with 407 total wins. That mark was good for second all–time (at the time).

Both Hall and Lindsay would be named as Hall of Famers and both players were named to the NHL’s Top 100 list last season.

Honourable Mentions: Blackhawks acquire Chris Chelios and a second round pick in 1991 (Michael Pominter) from the Montreal Canadiens for Dennis Savard; Chicago trades Matt Ellison and a third round pick in the 2006 draft (Ryan White) to the Philadelphia Flyers for Patrick Sharp and Eric Meloche; Chicago trades Stephane Matteau and Brian Noonan to the New York Rangers for Tony Amonte and the rights to Matt Oates; Chicago acquires Kris Versteeg and conditional 2008 draft pick (not exercised) for Brandon Borchenski.

For all the good to great trades the Blackhawks have been a part of, they also have a history of bad ones. For years the organization was seen as possibly the worst traders in the league. Players like Jeremy Roenick, Ed Belfour, and the aforementioned Chris Chelios all left the club before their careers were over. But the worst trade in team history was moving the hulking net presence of Phil Esposito.

As mentioned in the Boston Bruins trade history, the Blackhawks really dropped the ball on this one. Not only did they trade away Esposito, but also all three players turned into very strong pieces for Boston in the coming years. Stanfield would go on to score 409 points across six seasons in Bean Town. In comparison, he only managed to put up 22 points in 107 games prior to the trade. Stanfield may go down as the weakest player traded to Boston, but the Bruins probably won’t mind.

Ken Hodge Sr. was even more successful, of course. After putting up a modest 58 points across three seasons in Chicago, Hodge would explode for 146 points across his first two seasons on the east coast. He became a prolific goalscorer while wearing the Spoked B in Boston. He only failed to reach the 20-goal mark once in nine seasons, while cracking the 35-goal plateau on four separate occasions. His time in Boston would come to an end in 1976 as he was traded to the New York Rangers for Rick Middleton.

The centerpiece of the deal was and still is Esposito. After three season of 50-plus points in Chicago, Esposito was shipped to Boston due to his outspoken personality. Lucky for Esposito, the trade would see his career take a turn for the better.

Playing alongside fellow trade partner Hodge, Esposito would put up 35 goals in his first season with the B’s. He would never score that few in a complete season while in Boston again. In 1968-69, Esposito would set NHL all-time records for assists and points, 77 and 126 respectively. The points record would not last long though, as Esposito did himself one better by putting up an astounding 76 goals and 76 assists in 1970-71 to shatter the previous mark. It would take 10 years for another player, Wayne Gretzky of course, to break his record.

When his Boston career was finally over, Esposito’s numbers looked like something out of a video game. He finished with 459 goals and 1,012 points across 625 games. His 1.62 points-per-game as a member of the Bruins is still the most by any player in team history.

Esposito would go on to be named to the Hockey Hall of Fame and more recently was also named to the NHL’s Top 100 list.

For a player as good as Esposito you would hope the Blackhawks got a kings ransom. Unfortunately for their fans, the return was less than ideal. In what has gone down as one of the most lopsided trades in NHL history. Gilles Marotte, Jack Norris, and Pit Martin never really reached the heights that were expected of them.

Norris managed to only play 10 games in Chicago. He ended up being claimed by Montreal in the Intra-League Draft. His 4.42 goals-against-average across those 10 games left much to be desired though. He would make a return to the NHL two years later with Los Angeles, but failed to make a big impact. He would spend the next four seasons in the WHA before retiring from the game.

Marotte had a slightly better time in Chicago than Norris. Across parts of three seasons in The Windy City, Marotte put up 73 points in 192 games. Marotte was never able to be a standout defenseman though for the team and was shipped to Los Angeles partway through the 1969-70 season.

Martin was a solid player for Chicago though. He would go on to play in 10 and a half seasons with the Blackhawks after the trade. Across those roughly 11 years, Martin would score 20 goals on seven different occasions. He even managed to break the 30-goal mark three times. His Blackhawks career would end with him putting up 627 points across 740 games. To this day he has the eighth most points in franchise history. But no amount of effort from Martin will ever console the Chicago faithful. This trade will always go down as one of the worst in not only Blackhawks history, but NHL history as well.

via Last Word on Hockey, by Nick McVicar