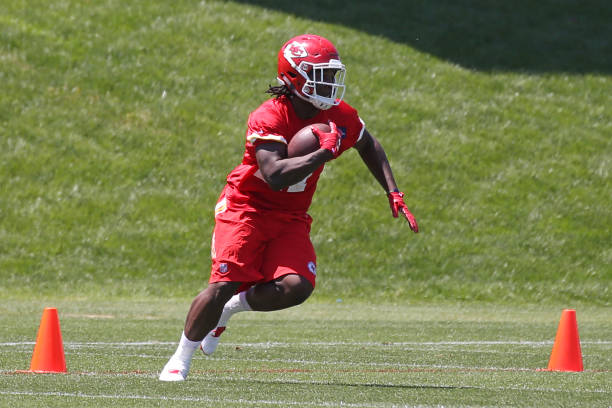 Training camp day one is fun and commonly about working out rust. Football is back and the air is crisp. Yet, the next morning, the soreness returns, limps into the trainer’s room begins, and the grind sets in. Players remember the grueling task that is the three-week off-season process and rookies start their tenure as the ‘assistant equipment manager.’ Fundamentally, the will of players is tested and the intensity picks up.

Exactly as expected, the first weekend of the Kansas City Chiefs training camp brought intensity to St. Joseph, Missouri from a determined offense featuring electricity and a competitive defense bringing finesse in the secondary and violence up front. Between quarterback Patrick Mahomes two-minute drive, linebacker Kevin Pierre-Louis toning up the intensity with first string repetitions, and wide receiver Seantavius Jones making a surprise splash, the first weekend of pads offered a lot to unpack.

Saturday morning began with a cloudless sky and thousands of anticipatory fans. Although mere practice, everyone was on edge to spot anything. As part of the beauty of training camp, the intricate details will stand out – helping lower tier players make the cut.

After individual drills wrapped up, the first 11-on-11 drill of the season began. Instead of Tyreek Hill stealing the spotlight immediately, it was Jones who stole the show with a contested catch over corner Marcus Peters. This was no fluke though – shortly after he caught another contested catch.

Jones made a third impressive catch, and subsequently received post-practice interviews from the media. Fortunately, he was not the only young player to make a splash. Mahomes will be a center of focus as the quarterback of the future. His first two-minute drill was resounding and showed creativity.

A sign of quarterback leadership is driving an offensive unit 75 yards down field with under two-minutes to play. Hitting tight end Ross Travis, the crowd picked up as Mahomes brought a sense of urgency to the field. He then hit running back C.J. Spiller twice to set up a roll out run for the touchdown. Mahomes pump faked, read that the contain defender bit, and took the ball 15-yards into the end zone.

The two-minute drill not only showed composure from Mahomes, but creativity in offense. Assuming the Chiefs were running a traditional offense, Travis and Spiller are both non-primary targets. Hence, Mahomes had to check down and make a read to complete these throws. Further, his ability to roll out showed that head coach Andy Reid and offensive coordinator Matt Nagy have a different scheme in mind with Mahomes’ athleticism in mind.

Before getting too excited, recall this is only day five. An entire pre-season will put Mahomes through the real test of mentality. However, day one gave fans reason to be positively enthralled. Nagy said as much himself.

“(Mahomes) is very calm, you can’t break him down,” Nagy said. “Coach [Reid] gets after him and every once in a while. I’ll be looking out the corner of my eye to see if he’s starting to break down, but he’s doing great.”

A favorite target for starting quarterback Alex Smith during the weekend was utility receiver Tyreek Hill. Hill and cornerback Marcus Peters battled it out constantly, including a great break up by Peters as captured by Kansas City Star photographer David Eulitt. Hill, however, had his own impressive receptions in the battle as well, and in the end both Pro Bowlers looked impressive.

The only other news of the day was undrafted free agent safety Jordan Sterns missing practice due to illness. Everyone else was returning healthy for Sunday – the first day in pads.

With the Kansas City Chiefs needing a wide receiver to stand out during training camp, Jones great day was a welcome sign. That said, he is facing an uphill battle. Having bounced around the practice squad since arriving in the NFL out of Valdosta State, Jones needs to be consistently good to make the cut in August.

Although he played for a Division II school, his height (6’3”), size (200 pounds), and speed stood out and landed him an initial spot with the New Orleans Saints. However, a lack of ability to battle with corners in the NFL forced him to move to the Philadelphia Eagles before arriving with the Chiefs.

Fortunately, Jones looks to have improved his combat skills in the secondary. With more practice, he is looking to use his size to land more touchdowns in the NFL. He scored 13 in his senior season at Valdosta State, including a school-record six in one game.

“He knows what he’s doing and he knows any of the adjustments that we have based off the coverage,” Nagy emphasized. “Instead of thinking, ‘Am I in the right position to make this catch’, he already knows he is and makes the catch and the play from there.”

“The other nice thing with ‘Stretch’ is that he’s able to play different positions, and he’s a bigger guy. So, not only can he use his height against some of the corners on the outside, but inside he’s able to use some of his speed and he’s a nice target in the middle.”

Sunday brought more clear skies, but more importantly, pads. Hence, the physicality of camp was in full motion as fans could now see rookies and standouts test themselves against seasoned veterans in realistic simulations.

However, opposed to Saturday, Sunday began without linebacker Justin Houston. Everyone was holding their breath until he appeared. Houston’s health has been a concern in the past, and fans want to see the most out of their Pro Bowl pass rusher.

Fortunately, he appeared about an hour later and soon dismissed concerns by taking part in the 9-on-7 run drills. According to Coach Reid, Houston was randomly drug tested by NFL officials on a surprise visit.

Houston was not the only focus of defensive drills. Corner Steve Nelson stood out by picking off a Tyler Bray pass early in practice. Rookie defensive end Tanoh Kpassagnon and veteran free-agent arrival Bennie Logan also had good days fighting through the offensive line. And as always, Marcus Peters continually broke up passes.

New linebacker Kevin Pierre-Louis shined in the first part of practice, swapping between Derrick Johnson and Ramik Wilson on different schemes. Since it was his first practice, he caught up quickly and continued to show a consistent desire to learn, often found standing by linebacker coach Mark DeLeon. Although he started at inside linebacker, it will be intriguing to watch if he is used as a strong side linebacker later this week.

However, not all was perfect from the defense. Hill caught several passes that confused even Peters. Hill takes the style award for the first weekend in camp, catching several impressive passes. His electric speed is pushing him to be more than a return. In fact, he was not used as a primary returner, and instead is playing a bigger role in the offense; a role demanded by fans and pundits after his breakout rookie season.

“(Hill) was hungry when he first got here,” stated Peters. “They think he is just fast, but he is a really technically sound receiver. He is just a little dude, but he is in a big man’s body.

Spiller continued an excellent second day and is adding another running back name to watch. Between Spencer Ware and Kareem Hunt, Spiller will be fighting for time. However, after two days in camp his best plays have come in the passing game. Additionally, he may serve as a returner to create time for Hill on offense.

Only one injury occurred on Sunday as left tackle Isaiah Battle was carted off the field with a hamstring injury.