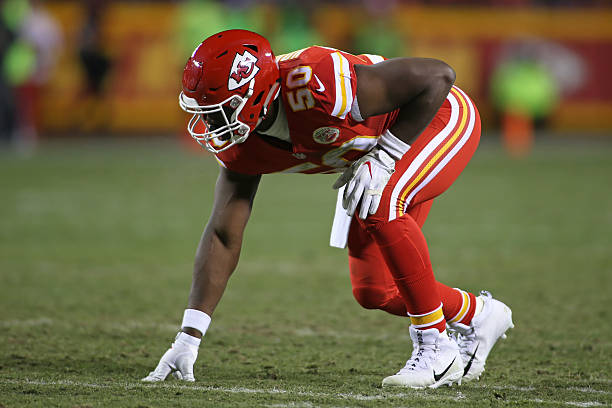 Violence and asserting the will to be violent is key to championship NFL play. In a league where all men are at the top of their game, success comes down to mentally beating the man across from you. In fact, every part of the Chiefs team needs to be more aggressive when it comes to the 2017 season. Yet, one part of the 2017 Chiefs will stand above the rest to make them a deep playoff team: the pass rush. The Kansas City Chiefs pass rush has shown in the past they can be the best part of the team. In 2017 they need to be a legendary band of brothers. Mentioning legendary does not necessitate one man having an all-time season. The band of brothers aspect is just as important. Rather than relying on one man to functionally destroy and strike fear in quarterbacks, Dee Ford, Justin Houston, Chris Jones, and Tamba Hali need to come together and create a unit of multi-faceted pass rushers who can overcome any offensive line scheme. Further, Allen Bailey or Bennie Logan need to support this band of brothers by becoming tanks in trench warfare. Elite success won’t come from a one-sided rush, but a joint effort.

The Battle in the Trenches: Technique

Success rushing the pass rusher starts in practice by building a cookbook of battle techniques. Often the battle that goes on in the trenches dictates the game, but is overlooked on television. Not to blame the producers, they would need to zoom in and slow down the game to serve justice for what each man is doing. The play begins with footwork, quickness off the snap, and hand battles that can only be observed under a retrospective microscope.

Appearing as a cohesive part of the game, the trench line in football is best described as a battle between symphonies. One orchestra (the offensive line) has the sheet music practiced and in front of them – they know what notes are coming next. The other orchestra (the pass rush), however, is presented with lines of music one page at a time. This second orchestra must win based upon their tone and musical intonation to predict what is coming next.

Understanding the finer points of the ensuing battle is essential to understanding the way in which the Kansas City Chiefs pass rush will fight their way through 2017. Having an orchestra with one lead violin is boring and a path to failure. However, an orchestra that works together is an orchestra that succeeds in the end. For example, Tamba Hali and Dee Ford possess different technique patterns that ought to lead to a cohesive and focused attack on the offensive line.

Hali has a tighter body circumference that allows him to line up out wide and attack quarterbacks from the edge. As a specialized talent, he can press tight ends on the line, and come in on a delayed blitz. He has quick twitch muscles that beat slower NFL tackles.

Ford and Justin Houston contrast against Hali by playing on a wider compass, but tighter schematically, staggered behind the front three defensive linemen. Their quicker technique up front allows for a stronger bull-rush through guards. Ford has yet to predominantly take on the true linebacker role in his career, but ought to in due time. In his young career he has yet to show the well-rounded understanding of pass, run, and coverage defense. On a positive note, the factor he has not yet hit his potential is scary; Ford lead the Chiefs pass rush with ten sacks in 2016.

Houston is the key that has made the pass rush elite in the past. His aggressive hand-combat technique pops the offensive line in the jaw and forces constant pressure on blitz schemes. Failure to account for Houston blitzing into any gap allows historic three sack games. Ford’s body is eerily reminiscent of Houston, and shows every ability to turn into the same type of player. Having two men that are pure pass rushers will open lanes on the edge for younger pass rushers such as Chris Jones and Tanoh Kpassagnon.

One of the most important, underlying factors for the Kansas City Chiefs pass rush in 2017 will be the training room. Health and longevity is a factor linebackers Justin Houston and Derrick Johnson must fight for. Training camp will expose their off-season conditioning, but all indications point to a strong return for both linebackers.

2016 saw only five games from Houston before his season ended, and 13 games from Johnson where he was still feeling the effects from a 2015 injury. Johnson was hobbled, slow, and lacked the ability to power through key punching lanes on the offensive line. In short, neither had longevity to be factors.

Longevity is part of off-season conditioning – training, eating, working out all in a balanced manner so the body can adjust to the length of a full NFL season. Fighting past offensive lineman for 16 games is a tough challenge; doing so completely healthy is another challenge altogether.

Maintaining a core group of pass rushers is going to be more important than health. Health begets the ability to play like a band of brothers. The most important part of 2017 is already in the books – just time to wait and see how they handle themselves in the coming training camp.

The concept of a band of brothers cohesively fighting together ties back into the idea of technique. The different body styles of Hali and Houston create a multi-faceted pass rush. The NFL today is dampened by offensive lines that are not yet adapted to handling a cookbook of fighting techniques. The Chiefs pass rush features multiple styles, putting them at an advantage if everyone stays healthy.

The 2017 season features opponents such as the San Diego Chargers, Buffalo Bills, Washington Redskins, and New York Jets – all offensive lines featuring poor to mediocre takes. However, several challenges exist, with the biggest challenge against the Dallas Cowboys in Dallas – a matchup that will test the ability of the Chiefs pass rush to throw off Dak Prescott as he evolves in his second year.

While every game will demand the pass rush to be elite, week one (at New England Patriots), two (Versus Philadelphia Eagles), nine (Dallas Cowboys), and 16 (Miami Dolphins) are matchups that can be single-handedly manipulated by the pressure put on to the quarterback.

To get after the rhythmic or younger quarterbacks above (Tom Brady, Carson Wentz, Dak Prescott, Ryan Tannehill) the Chiefs will feature a 3-4, almost wide-nine blitz package. Hali and Ford will take the edge, with Chris Jones working in for Hali. Ford, as mentioned earlier, might see more time playing a more interior role next to Justin Houston on passing downs. Further, Jones will work in as one of the three-down tackles next to the bigger bodies.

The bigger bodies are the core of the scheme. Houston et al can do so much to assert an aggressive pass rush with technique, but the pass rush will not be consistent against better offensive lines. For a legendary 2017, Bennie Logan or Allen Bailey need to evolve from simply being lateral run-stoppers, to up-field pass rushers. Their ability to demand double teams from guards will create the lanes for speed rushers to step in and gain instantaneous advantage on every blitz call.

The most overt factor of the pass rush’s effectiveness will be noticed in the secondary (to be discussed next week). Consistent pressure from the front seven will lead quarterbacks to get rattled and make poor decisions. Henceforth, Eric Berry and Marcus Peters having incredible seasons defending the pass is a must. The secondary and pass rush have a symbiotic relationship.

In 2016, the Chiefs pass rush was an abysmal 28th in the NFL. (In some respects, making the job the secondary did even more impressive). Injuries, inconsistent play, and age were several factors in that ranking. Dee Ford led the team with ten sacks, and was followed by Justin Houston with four sacks – he played only five games. Tamba Hali aged, and was most likely playing gimpy, racking up only 3.5 sacks.

Recall, success does not come from one dominant player, but a group working together. Hali resurrecting a ten-sack year is not happening at this point in his career, thus emphasizing the Ford and Houston connection. In addition to pressures on the quarterback, Ford needs to have another ten-sack year. Yes, this will be a challenge for him to repeat, but the onus of his position on the team demands excellence.

Houston, if healthy, has the potential to rack up another 12 sacks, returning to the nightmare inducing player he has been in the past. Hali, as he is aging, can settle at three, Chris Jones at five, and Derrick Johnson at six. With Allen Bailey and Bennie Logan serving more as pressure tackles than sack masters, a mix of seven sacks between the two will satisfy. Total those numbers up, and the magic sack number is 43, or a top five pass rush.

A 43-sack effort is a high margin for the Kansas City Chiefs to hit and is intrinsic to a constant pressure on quarterbacks. Forcing offensive coordinators to leave in tight ends or running backs on passing plays will tangentially help the secondary have less men to cover.

For the Chiefs to be a true, consistent threat in 2017 their defense needs to be nothing short of nightmare inducing and atop of the NFL.