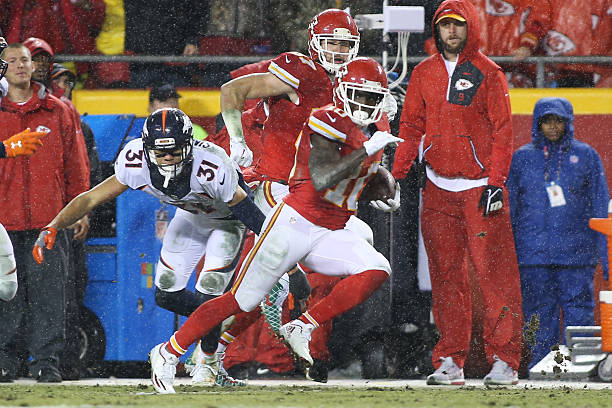 If you have missed any ‘Implication of Success’ articles, catch up now! Quarterback, Offensive Line, Wide Receiver, Tight End

Overlooked and a mere interlude for many observers of the NFL, in actuality, the special teams unit is not a break in the action, but the core and heart of Chiefs work. Kickoffs, kick return, punt returns are honorary plays composed of ‘no name’ players from offensive and defensive depth. These plays represent a chance to make an NFL roster by sprinting, hitting, and working your heart out for ten seconds. ‘No name’ players of the NFL have the power to turn the tide of field position and thus a game. The Kansas City Chiefs special teams realizes the power in their play, and produce more than other NFL special team units, a trend that will continue in 2017. Fans may not know the names of these players, but they will have the single biggest influence on micro outcomes of games.

Predicting the special teams unit year in and out is essentially the same as predicting the weather. Generally, a meta pattern can be easily predicted – sunny, rainy or Tyreek Hill will be the returner. Yet, there are those microcosms that are harder to predict – sunny, but random lightning storm over Kansas City in the middle of the afternoon, Eric Berry will be a starter, but Leon McQuay III will become an essential depth player on special teams. Predicting exactly where players such as Dadi Nicolas, Frank Zombo, or De’Anthony Thomas precisely fit is exactly like trying to predict those pesky lightning storms.

Although difficult to predict, the lightning storm will impact your day; just as these depth players will impact the Chiefs season. Run a mental experiment, define characteristics that Chiefs special teams coach Dave Toub seeks in a player, and extrapolate that definition outward to find the core of players to heavily influence special teams.

Position, depth, or notoriety does little to define a Kansas City Chiefs special teams player. Rather, it comes down to the foremost characteristic of heart and will. Cliché? Yes, but essential when kickoffs and punts are among the most violent plays in a football game. Consisting of nine to ten top athletes flying toward each other with the shared aim to destroy the opposition, the mind takes over any ambition of the body to format hyper-aggressiveness.

Part of the reason why many no name players make up special team slots is due to the mental and physical toll put onto the body in one play; a factor starters need to pace themselves for over a game. However, in a strange dichotomy, playing on special teams demands mental sharpness and thus gives honor. Coach Toub demands precise technique from every unit; thoughtfulness from punter Dustin Colquitt all the way to running technique from returner Tyreek Hill. Special teams is a process of doing the same action over and over, but getting better each time.

Study a gunner, or those corners defending a gunner from getting downfield. The gunner position is a war every play, but a war of precise technique. Coaches demand problem solvers and instincts to win these individual wars. One step here, one punch there, and D.J. Alexander finds himself free. The most important battles do not appear on the TV, too focused on the swirling punt, but behind the cameras where gunners are out thinking the next man downfield.

Unpredictable, thoughtful, hyper-aggressive, and relentless; these are the qualities Dave Toub looks for. But how are they implemented on the gridiron?

In an NFL where thousands of players are cut early and often into their careers, special teams separates the final players that make a team. In a fascinating New York Times article from January of this year, Toub and players gave insight on their preparation. Eric Murray was one of these players, a mere 198 pounds, whose heart outweighed his size and subsequently made the final roster cut thanks to special teams.

“A lot of times, we match up against people who weigh 250, 260. But even though we’re smaller, Dave always says to punch them in the mouth. We’re relentless.”

Murray’s technique was so refined and relentless, he eked onto the Chiefs roster as a key special team player. Playing on both sides of the ball, Murray throws powerful blocks for Hill and hammers through those who stand in his way on punt coverage. In his rookie season, this relentless spirit landed him on the Pro Football Focus’s All-Pro first team.

The training that made Murray so refined comes from Coach Toub’s point-ranking system. During games coaches force competition by assigning points for performance. Each play is a multi-faceted race to craft the best sheds (or blocks), and get to the goal line first (or create a lane for a touchdown.) The winner in each function obtains points, and Tuesday the coaches give out performance packets that detail points won or lost. Although these packets come with scrutiny, that scrutiny is received with a joyful anticipation by players eager to improve.

Toub demands excellence in the mini-wars; he was the coach that crafted the NFC Champion Chicago Bears special teams units. Now crafting the Kansas City Chiefs special teams are defined leaders Frank Zombo, Anthony Sherman, and Daniel Sorenson. Eric Murray is representative of those players who come along and find a way to not only fight, but think their way onto the special teams.

With a large crew of rookies and second-year players fighting for a roster spot, Toub and the special team leaders will be looking for D.J. Alexander, De’Anthony Thomas, and Demarcus Robinson to earn a cherished spot. Alexander brings relentless size and ferocity as a linebacker, while Thomas and Robinson can work as speedy gunners and backup returners.

Competing to join this unit will be a plethora of rookies led by seventh-round pick Leon McQuay. Out of USC, McQuay has the speed and raw athleticism to play safety in the NFL, but not the instincts. Special teams, however, can teach NFL instincts. Teaching as a principle of special teams will give rookies such as linebacker Ukeme Eligwe, corner Ashton Lampkin, and wide receiver Marcus Kemp a spot to adjust to the speed of the NFL. The hardest aspect to overcome in the NCAA to NFL transition is the speed of the game, but as Coach Toub says, “If you have that combination [speed and instincts], you know you’ve got a guy. The floor is going to be at least a good special-teams player.”

Pushing the envelope of what special teams can do is a theme for Coach Dave Toub. In 2016, the Chiefs pushed that envelope to score 30 points, force four takeaways, average the most punt return yards (14), average the ninth most kick return yardage (23.6), land the second most punts inside of the 20 yard-line (38), and average the best field position in the NFL at beginning of drive. These accolades made up for offensive ineptitude and defensive injuries to grant a 12-4 record and the AFC West Championship.

No matter how the other units of the Chiefs perform, special teams will demand relentless excellence in 2017 to succeed. After only one season, Tyreek Hill has become an ingrained asset to the Chiefs team. He is where the sign of production begins.

Hill may be one of the fastest players in the NFL, but speed is useless without blocking. Opponents will look to punt and kick away from Hill and thus, a natural drop in overall production will occur. The advantage in opponents punting away comes as untrained punters often give better field position by punting away. The disadvantage for the Chiefs is the inability for Hill to take a return to the house. Thus, success defined for Hill’s stats come in the average yardage returned and touchdowns.

Individually, Hill returned kicks an average of four yards longer than other Chief returners (27.4 YPR – 23.6 YPR). A function of the Chiefs game day scheme is to get good field position for an offense that options to short yardage plays; hence, an inability to get downfield quickly. As a team, the average needs to stay above 23 yards per return, and Hill needs an individual minimum of 26 yards per return. Hill also influence games around by taking two kick returns for touchdowns. Read another way, that is two plays that potentially can clinch two victories.

The pride of the Chiefs special teams unit is their punting – both return and coverage. The return unit, behind the speed of Hill, averaged an impressive 14.8 yards per punt; 2.9 yards more than second place Philadelphia Eagles. Individually, Hill had an average of 15.2 yards per punt and two touchdowns.

In 2017, the Chiefs will see more punts out of bounds, but punting out of bounds alone grants five to 20 yards de facto, depending on the skill of the punter. The Chiefs can stay golden by managing above 13 yards per punt. Another two touchdowns from Hill on early season punts can turn the tide of more games, and make punters regret their life decisions.

Dustin Colquitt has done more than his fair share of helping the Chiefs defense. Not only is his placement impeccable, allowing the coverage unit to keep punt returners inside of the 20, but his leg strength is unparalleled. Putting an NFL leading (tied) nine punts in the end zone for touchbacks did half of the job. Colquitt is a maestro and artist of the punt; great placement and touchbacks keeps opposing teams from taking advantage of field position.

Closing an article on the Chiefs special teams and not mentioning the heroic kicker Cairo Santos would be a disservice. Santos’ story on making it to the NFL is impressive on its own, as he became the first Brazilian NFL player to make an opening day roster in 2014. When Santos took the job in placement of kicker Ryan Succop, there were major concerns regarding how functional of a rookie Santos was. After starting shaky, he quickly rebounded to tie Succop’s 25 field goal rookie season.

Over time, Santos has made himself an essential part of the Chiefs scoring unit. Not only has he been a consistent kicker, making 84.3 percent of his field goals, but a powerful kicker nailing a long of 53 yards each season in his career. His mark includes owning the NFL records for seven field consecutive field goals against the Cincinnati Bengals in 2015 and a remarkable seven of 12 field goals made from 50+ yards.

2017 is destined to be another record mark for the young Chiefs kicker. He has won over teammates and Chiefs Kingdom. Although he is a remarkable kicker, it would be ideal if less field goals were attempted – indicative of more red zone trips turning into touchdowns instead of mere field goals. Nailing 27 of 30 field goals would be ideal for the Chiefs; as long as those five extra field goals from the 35 attempts in 2016 turn to touchdowns. Thanks to Cairo Santos for being another relentless part of the Kansas City Chiefs special teams unit.