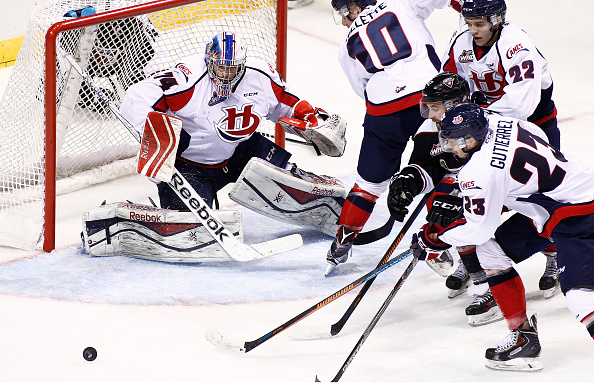 Drafted 17th overall in the 2013 WHL Draft, Stuart Skinner joined the Lethbridge Hurricanes for a few games that year, before taking over as the teams starter in his first full season of junior eligibility. A November birthdate, Skinner has been the Lethbridge starter for three seasons now. Skinner led the Hurricanes to a 95 point season this year, and took them all the way to the WHL’s Eastern Conference finals before they would fall to the Regina Pats. Overall he had a .905 save percentage in the regular season and a .916 save percentage in the playoffs. He also played in the CHL Top Prospects Game.

At 6’3″ tall, Stuart Skinner has the type of size that NHL general managers are looking for in goaltending prospects now. He combines that size with excellent athleticism. Skinner is a butterfly goalie who gets up and down very quickly. He has quick legs that take away the bottom of the net. For a young goalie, Skinner is ahead of the pack in terms of his rebound control, however there is still some room for improvement as well. He is strong to the blocker side, but could use a bit of work on his glove hand.

Skinner loves to come well out in his crease, using his size to cutting down angles and give shooters even less to look at. He had some issues with being a bit off on his angles early in the year, but seemed to have that cleaned up late in the year and in the playoffs. Skinner moves well side-to-side, tracking the puck, as well as keeping his shoulders square to the shooter. He also recovers quickly to get into position for second chance opportunities.

Skinner handles the puck well. He can retrieve pucks and get them to his defencemen to start the breakout. He also can make the long pass to beat a team making a bad change, especially when his club is on the power play. Skinner even scored a goal this past season, firing it down the ice and into the empty net.

Skinner is calm and composed in the net. He recovers quickly from goals against and is ready to make the next save. His steady play inspires confidence in teammates. Skinner understands when to cover the puck to get his team a whistle, as well as when to keep the puck moving and let his team launch a counter attack. He is good at communicating with his defencemen and making sure that his teammates are on the same page. Skinner does not seem to get rattled when there is traffic or players crashing the net, instead working to find pucks through the massive of humanity that can develop in front of him.

When Skinner joined the Hurricanes, they were a rebuilding franchise, and at the bottom of the WHL standings. He has been the backbone of their rise back up the standings and into real contenders the last two years. Skinner will need time to develop, but he has the pedigree to be a number one goalie in the NHL. His style is reminiscent of Matt Murray of the Pittsburgh Penguins. This is not a talent comparison though.