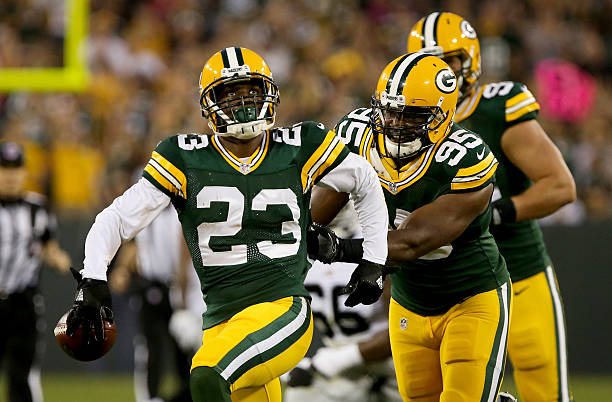 Via Last Word On Pro Football, by Jim Weidner

Last Word on Sports recently spoke with Ben Clubb, the current linebackers coach for Balko (OK) High School, to discuss the Packers defense from last season and a small preview of their defense for this coming season. Coach Clubb will be starting his fifth year as a football coach. He has experience at three different high schools, where he has coached the defensive line and the linebackers. Besides his experience as a football coach, Coach Clubb has followed the Packers for many years and has his own twitter handle, @packersxochat, where he breaks down tape of the Packers, giving fans a better understanding of what the Packers are doing. In this article, we focused on the Packers defense and asked him what he has seen and what Packers fans should expect this coming season.

LWOS: Coach, it is a poorly kept secret that the Packers defense, especially their pass defense, was downright awful last season. From the defense that defensive coordinator Dom Capers runs, from the game tape you have reviewed, do they have the right personnel to run his defense?

Coach Clubb: I truly believe that Dom Capers is one of the best defensive coaches in the NFL. His scheme is absolutely amazing. He has been at it a long time and has an impressive résumé. His game planning abilities and attention to detail is outstanding.

Now to answer your question, I do believe that they have the right personnel. I believe the 3-4 defensive alignment is the best in the NFL, the different looks it gives is endless. Here is a little breakdown of what you need for a 3-4 defense.

In the scheme, the defensive lineman must be quick. If you have an end in a four technique (lining head up on tackle) he must be quick enough to rip under the tackle and control the B gap, or quick enough to get a hand on the tackle and force the play back inside. Your nose must be a two gap player. Many times he must read flow and control the play side A gap.

Inside linebackers must be quick to read and react. In a base front, the inside linebackers can read an uncovered guard. Usually, they will be in a three technique (outside shade of guard) and control the play side B gap, and backside A gap. These players must control their gap and get to the football. You need guys who can move and drop in coverage as well.

The most difficult position is outside linebacker. Half the time they are stunting off the edge, other times they are dropping into coverage. We’ve seen more hybrid guys play this position over time. Finally, your secondary guys must be very multiple. I’ve seen Capers run a three deep look, man defense, and a two under look. I haven’t seen much cover two or quarters coverage. I feel the Packers fit the 3-4 well. Because of the flexibility, I believe it gives the Packers the best chance to succeed.

LWOS: Speaking of poor play on defense, cornerbacks Damarious Randall and Quinten Rollins, former first and second round picks, stood out the most in regards to poor play. Both battled injuries, but it seems that both, especially Rollins, might be poor fits for the bump and run coverage Capers prefers to run. Do you feel it was more injury or are they truly poor fits for this defense?

Coach Clubb: I believe a lot of the poor play stemmed from injuries. Depth has been a big problem at this position, and we constantly see Ted Thompson draft defensive backs due to lack of performance. There’s a lot more that goes into it than most fans think. I think Capers is putting his guys in the best possible position to succeed.

If you look at the tape, you’ll see that early in his time in Green Bay that Capers really preferred a three deep look. This scheme really put corners in the best possible position. When calling a coverage you have basically two mindsets: press and force the issue, or play off and keep everything underneath.

Capers has rolled more with a two under look the last two seasons, meaning you are manned up but have a two deep look with safeties for support. The great thing about a two under look is that there isn’t much reading involved. You have one read, and that is your man. We see a lot of this in the nickel situation. It’s a simpler coverage that allows his guys not to have to over think or read as much.

In Capers base look, he almost exclusively uses a single high safety and plays more cover three. Seldom have I seen him run a cover two look from base, which is hard to argue with. Cover two suffers greatly against vertical routes. We also saw a lot of fire zone stunts, meaning he is bringing five-man pressure with three underneath defenders and three deep defenders. Both Rollins and Randall are still young guys and I believe still have time to turn it around.

LWOS: With Davon House returning to Green Bay and the Packers spending their top pick on cornerback Kevin King in this year’s draft, from what you have seen, do you feel like one or both will be better fits as boundary cornerbacks? Both seem to have the size that Capers likes.

Coach Clubb: The addition of House, I believe, will turn out to be the best off-season move the Packers did. Both House and King have the potential to be very solid boundary corners in Capers scheme. King has a leg up coming in as a rookie, with having experience in a 3-4 scheme at the University of Washington.

From an Xs and Os perspective, the most important thing to consider though is that the best secondary player needs to be your field side corner. At the high school level, most coaches will put their best defensive back as their left corner because that player will see a bulk of runs his way. In the NFL, it is a little different due to the fact that the hash marks are narrower than either high school or college so offenses can be more balanced. Still, most offenses have right handed tendencies.

A lot of the time boundary corners will need to play secondary support, that is, if the primary force man loses contain, it’s up to the corner to force the play back inside. Everything funnels back inside in Capers 3-4 defense. This is different as opposed to a 4-3 alignment, in which guys use a “spill” technique which strings out the play and forces it to the sideline. I think both King and House are the big, physical guys needed in playing that support.

LWOS: Recently, LWOS discussed how the Packers seem to be moving away from the traditional inside linebacker and instead using safeties, like they did last season with Morgan Burnett, as an inside linebacker. It is expected that they will also use recently drafted safety Josh Jones in the same position. Have you reviewed any tape showing Burnett as an inside linebacker? If so, how do you feel it worked out? Would it work out again, especially in pass coverage, with Burnett and/or Jones?

Coach Clubb: I have seen this scheme a number of times on game tape. This look usually occurs when the Packers are in their dime package. Burnett would be the dime back who would play in a 30 technique alongside linebacker Joe Thomas at the other 30. From what I reviewed, it seemed to work well.

This is just more proof how flexible the 3-4 defense really is. You can play all the elements of a 4-3 or 4-2-5 with 3-4 personnel on the field. With as much third and four receiver sets that we see on first and second down, more often than not we will see this sort of personnel on the field. Against a team like Minnesota or New York (Giants) the defense will align more in a base set. Against more multiple or spread teams like San Francisco or Seattle you will see a lot more nickel and dime looks.

I think having hybrid players like that is a good look for a defense. The only negative I could see is asking those guys to take on blocks and fill a gap. They can get the job done, but it’s asking a lot from a defensive back to take a pounding if teams continue to run the ball. However, with as much throwing as we’ve seen in recent years I wouldn’t think that it would be a problem.

LWOS: The Packers suffered some losses with the departures of Julius Peppers and Datone Jones via free agency leaving the outside linebacker corps a little depleted. To go along with that, as discussed in the prior question, inside linebacker seems to be a weakness of the Packers defense. With all of that, from what you have seen from tape, would the Packers be better off with linebacker Clay Matthews lining up outside or inside at linebacker?

Coach Clubb: Matthews is at his best rushing the passer from the outside linebacker position. Moving him from that not only takes away what he is best at, but it also hurts the defense. Looking at the tape, it seemed as if he struggled to come downhill and play his gap. As soon as you read that a guard is firing out or blocking down on your shade (nose) you should be in the gap. A lot of the time he was a little slow on reads.

Watching him on the outside though is a whole different story. He has a nose for the football like none other and his pursuit is one of the best in the game. He benefitted by having Kevin Greene as his position coach. There is no doubt it hurt when Greene left. The inside linebackers are young, but if given time, should contribute. Pursuit is going to have to improve, that is what I see as the biggest weakness with the inside linebackers.