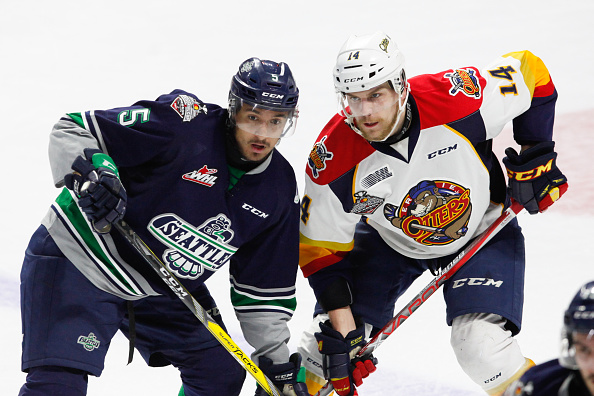 The 16th overall pick in the 2014 WHL Bantam Draft, Jarret Tyszka put in a solid season, and an excellent playoffs for the WHL Champion Seattle Thunderbirds. He put up six goals and 25 points in 54 games this season. He added two goals and seven points in 20 WHL playoff games, as the Thunderbirds took home the Ed Chynoweth Cup. Like many of his teammates, Tyszka struggled at the Memorial Cup though, as Seattle went home without a win. He also played in this year’s CHL Top Prospects Game.

Jarret Tyszka’s father Mark was a goalie who played in the BCHL, and also played division three hockey for Wisconsin-River Falls University.

Tyszka is an above average skater. He has a good first step and decent acceleration, however his top-end speed seems just slightly above average. He is propelled by a long and powerful stride though. Tyszka uses a wide stance, and has very good lower body strength. This allows him to be well-balanced, and strong on his skates. It is very difficult to knock him off the puck. Tyszka also has good edge work, agility and pivots. This allows him to transition quickly from defence to offence or vice-versa. His backwards movement is also very good. His lower body strength and balance will help to win battles in the corners and in front of the net, but he must add more upper body strength to be able to take full advantage of it at higher levels.

Tyszka has some offensive skills, but it is not what he is best known for. His slap shot has good power, and he uses his agility to walk the line and open up shooting lanes. He keeps his shot low, and gets it on net, giving his teammates the opportunity to create traffic as well as get rebounds and deflections. He also has the ability to sneak in from the point, and let go a quick wrist shot with a quick release.

Tyszka is not much of a play maker though. While he has a good first pass out of the zone, and moves the puck quickly in the offensive zone, he does not have the puck poise or patience to make plays from the blue line. Tyszka also is not the type of defenceman to lead the rush up the ice, though he does do a good job of picking his spots and joining into the rush.

Tyszka is very strong defensively. His positioning and gap control are very good and make him extremely tough to beat in one-on-one situations. While Tyszka is not the type to look for huge hits, he is willing to play physical. He battles hard in the corners, and clears the front of the net effectively. Tyszka will need to get stronger to play this way at higher levels. He also has good positioning and an active stick that cuts down passing lanes. Tyszka is not afraid to put his body out there to block shots.

Jarret Tyszka has the potential to be a top four defenceman, playing a two-way game. His defensive game will likely always be better and more important to his career than his offensive game. He could be an anchor to a pair, and more of a stay at home type. Future contributions on the power play would likely be second unit at best. Still there is real potential here. Tyszka’s game resembles Travis Hamonic of the New York Islanders, but this is a style comparison only and not a talent based one.

The following is a compilation of videos, assembled from Youtube.