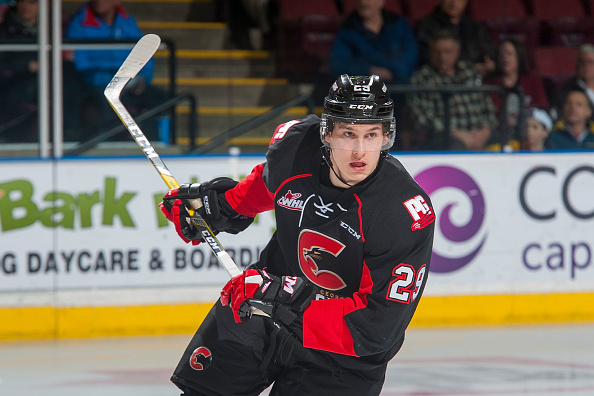 The 23rd overall pick in the 2015 CHL Import Draft, Nikita Popugaev had a good start to his second season with the Moose Jaw Warriors. The Russian import put up 22 goals and 51 points in 40 games. Dealt at the WHL trade deadline to the Prince George Cougars, he had some trouble adjusting to his new team. Popugaev scored just seven goals and 18 points in 31 games with his new club. He also struggled in the playoffs with just three points in six games.

Popugaev has many of the skills needed to be a top prospect, and to get a first round rating. However, the skating is holding him back as he needs work on being quicker in his first step and his acceleration. In short races for loose pucks, he seems to find himself a step behind. The overall top end speed isn’t bad, but it takes some time to build up to it. His agility is good for a big man, but could use some more work. The skating may come around with time as he grows into his body and becomes better co-ordinated. It will also take some work on technique though, as Popugaev’s first few steps are a bit awkward. Once he gets going his stride gets longer, and generates that speed and power. He has good strength in his lower body, and uses this to generate the balance and power to fight for pucks in corners, use his body to protect the puck, and to establish position in front of the net.

Popugaev has outstanding size, already measuring in at 6’6″. He combines this with excellent stick handling to be very tough to defend one-on-one. Add in good hockey sense and a strong wrist shot, and Popugaev has many of the attributes that teams will be looking for in a power forward prospect. He is particularly adept on the power play, where the Warriors seemed to run everything through him, but is not getting the same looks on a stronger Prince George team. Popugaev had proven that he has the vision and passing skills to set up others in these situations.

Popugaev is mainly a goal scorer. He is very good at playing down low, hanging out around the opponents crease, where his big size provides an excellent screen. He has the soft hands to pounce on rebounds, work on deflections and tip-ins, and to one time passes into the back of the net. Popugaev also has a very good wrist shot. It is very heavy and he has good accuracy. He also gets it off quickly, with a deceptive release that avoids a quick wind-up.

Popugaev’s defensive game is a work in progress. He needs to keep his feet moving in the defensive zone, staying active and covering his man. At times he has a tendency to puck watch and stop staying involved away from the play, leaving his man to find openings to get a scoring chance. He could really stand to bring more intensity in his own end as well.

Popugaev had a first round rating earlier in the year, when he was playing for Moose Jaw. The trade deadline didn’t do him any favours though, and he’s dropped in our rankings as a result. Some team may still be intrigued by Popugaev’s size and skill and find him a worthy project in this draft. There is potential there, but this feels like a real boom-or-bust type of pick. Popugaev’s style is reminiscent of former NHL player, Nik Antropov.