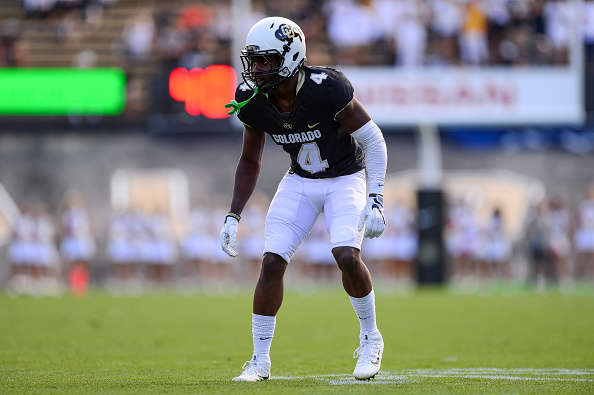 Via Last Word On Pro Football, by Parker Hurley

Chidobe Awuzie was a three-star recruit coming out of his high school in San Jose, California. Awuzie played running back and cornerback in high school, and had the size and athleticism to start right away in Boulder for Colorado. He started as a freshman, playing in 12 games and recording 53 tackles with a sack and two forced fumbles. His sophomore year saw more starting time, but ended with a leg injury, limiting his season to nine games. Still, Awuzie put up 62 tackles, two going for loss.

After recovering from injury, Awuzie started 12 games in his junior season. Awuzie saw his most time in the slot that season, and found himself near the ball a lot more often. He finished with 85 tackles, 12 for loss, to go with four sacks, two interceptions and two forced fumbles. He was named second team All-Pac 12 with the increased statistical success. As a senior, Awuzie added 62 tackles, four more sacks, and an interception.

The secondary combination of Awuzie, Ahkello Witherspoon, and safety Tedric Thompson was strong enough to lead the Buffaloes from a four win season in 2015 to a ten win season in 2016. All three were named to the All-Pac 12 team, and it was Awuzie who was a first team All-Pac 12 performer. With years of starter experience combine with success, Awuzie is certainly a prospect worth looking into. We will do just that with the Chidobe Awuzie scouting report.

Awuzie profiles similarly to Amukamara in that both are big enough to play on the outside, but both are better off as starters in the slot. He profiles extremely similar to Amukamara in terms of size and athletic profile. However, they both also tend to play a bit smaller than their listed height and weight.

Still, Awuzie is a great threat in the slot. He has shown he can stand in the box and face the run head on. Also, he is great blitzing off of the edge, and nine career sacks compared to three career interceptions can speak to that. He is quick footed enough to hang with slot wide receivers, and with outside experience, should be looked at as a chess piece who can move around and succeed in favorable matchups. His limitations in coverage, and his rawness as a form tackler will likely push him out of the first round. However, a history of starter experience combined with strong body movement and a low floor makes it hard to believe that he would fall out of the second round.