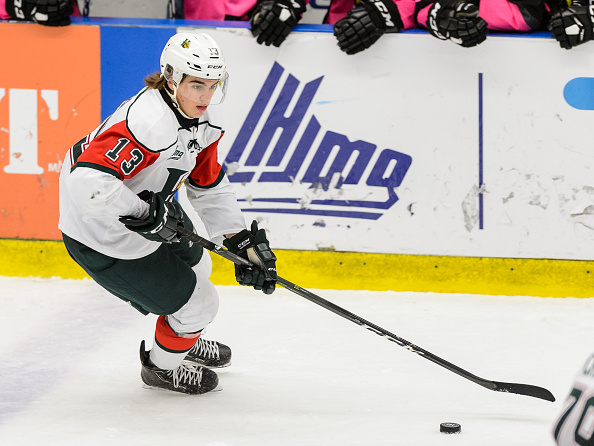 Welcome back to Top Shelf Prospects, the column looking at hockey’s stars. Over the next few days we will be previewing the 2017 NHL Draft by ranking our top 30 prospects. We will also do some honourable mentions.  As always, you can check out the previous Top Shelf Prospects articles here.

With the CHL season a good eight weeks old,  a month or so of NCAA hockey, plenty of games for the US National Team Development Program, the Ivan Hlinka Tournament, an international break in Europe, and the Subway Series all being played since we last updated our draft rankings, we have gotten a decent overview of what some of the biggest prospects for the 2017 draft are doing this year.

That said, as a staff we haven’t seen every player yet—it’s quite simply not possible this early in the season. If there is an obvious name left out, we’ll do our best to get a look before the February rankings; as well as before our final rankings that go from April through June.

The group we haven’t seen a lot of are European prospects who, for whatever reason, haven’t had much exposure on the international stage.  With the World Juniors, Five Nations, and the Under-18 all to come later in the year, we should get a better look at most of those players.

Teams around the NHL are looking for the big franchise centre. Already 6’3″ tall, Patrick has excellent size and a strong and powerful skating stride. A natural sniper, he has a tremendous wrist shot and quick release. He also has quick, soft hands and can bury chances in close to the net. His game is incredibly mature for his age. He has high end hockey IQ and always seems to make the right play both with and without the puck. Patrick has excellent vision and passing skills.

He can play both the power and the finesse game. Patrick works well down low, using his big body to shield the puck and to make plays in the cycle game. He can get in quickly on the forecheck and forces opposing defencemen to make a quick play, or make a mistake. Patrick’s big frame is quite intimidating. He also plays a strong two-way game, and is even used to kill penalties. His uncle is James Patrick, a defenceman who spent many years in the NHL.

Patrick missed the start of the season with an upper-body injury. He has played just six games this year, but has four goals and nine points in those games. The body of work over his previous two WHL seasons is impressive enough that he remains the top prospect in this draft.

Liljegren suffered from mononucleosis to start the season. He eased back into the Rogle lineup. He put up five goals in eight games in the Swedish junior league before picking up two assists in three games with the big club. Liljegren was very good at the Hlinka tournament with four points in five games. Unfortunately, Sweden finished fourth. He did get a silver medal at last year’s Under-18 Worlds.

Liljegren is an elite skater. He moves well both forwards and backwards, with excellent speed and acceleration. He also has very good edgework and pivots. As such he can cover a ton of ice. He can make offensive plays rushing the puck, or pinching in at the blueline; but still has the speed to get back defensively. Liljegren has the poise and smarts to quarterback a power play. He has excellent vision, and makes good passes to set things up at the line. He can also make the long breakout pass to hit a teammate streaking through the neutral zone. Liljegren’s defensive game is very advanced.

Drafted 6th overall by the Halifax Mooseheads in the CHL Import Draft, the Swiss sensation is lighting up the QMJHL in his rookie season. He already has 20 goals and 43 points in just 25 games. Hischier already has experience playing against men, with 15 games for Bern in the Swiss A League last season. He also played seven games for EHC Wisp in the Swiss B League. Hischier also has plenty of experience playing for the Swiss National team at the Ivan Hlinka tournament, the U18, and the U17 levels.

Hischier is a playmaker, with outstanding vision and passing ability. He has very good hockey sense, and anticipates his teammates movements in the offensive zone. Hischier has a very quick first step, excellent acceleration and agility, as well as great edgework. This, along with quick hands, allow him to avoid defenders and make him very elusive when working the puck in the offensive zone. His ability to make plays with the puck, while moving at top speed is something that is pretty rare to see in a 17-year-old. Hischier also has a very high work ethic, he never seems to stop working during a shift. Size is the biggest concern at this point. Hischier will need to add muscle to his frame before moving to the next level.

The second overall pick in the 2015 OHL Draft, Vilardi has good speed. He uses it to get in on the forecheck and cause problems for defenders. He uses his size to shield the puck and maintain possession in the cycle game, and uses his powerful stride to fight through checks and drive the net. Vilardi has a very long reach and excellent puck handling ability. He uses these assets to extend plays and wait for teammates to get open, before hitting them with a pass. Vilardi is constantly moving and getting involved in the play. He is extremely gritty and involved in battles along the boards, and in front of the net. The power forward prospect also has a very good wrist shot and an excellent release.

With Windsor hosting the 2017 Memorial Cup, there will be plenty of opportunities to show off his skills to the scouts. He has put up nine goals and 22 points in 16 games so far this year. Vilardi underwent surgery on Monday, an appendectomy, but should be back in plenty of time for Windsor’s run at the title.

Kostin has been a dynamic player on the international stage. With five points in six games, he led the Russians to the silver medal at the 2015 World Under 17 Hockey Challenge. He followed that up with four points in five games as an underager at the 2016 Under 18 World Championships. This summer he had four goals and seven points in five games, helping Russia to a bronze at the Ivan Hlinka.

Kostin has the strength and size to play a powerful game, as he is strong on the puck; effective in maintaining possession down low; and difficult to contain when he drives the net. His skating shows excellent speed, balance and power. He is also highly skilled, with soft hands and excellent stickhandling ability; a fantastic wrist shot and release; along with good vision and passing skills. Kostin plays a gritty game, not afraid to get to the front of the net, or battle for loose pucks at both ends of the ice. He could stand to be a little more selfish, and shoot the puck more as he often looks to make a pass.

Check out the next five here.