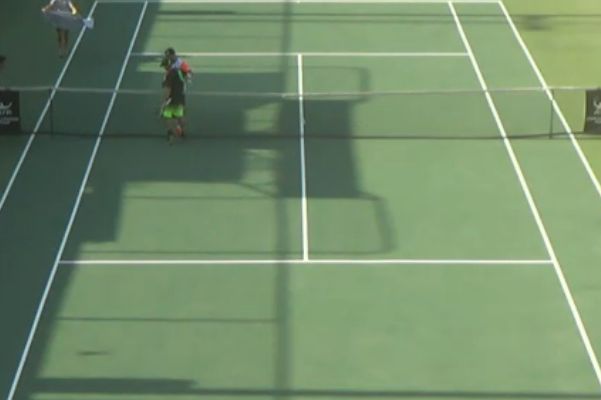 From LastWordOnTennis, by Yesh Ginsburg

No one would think that the Challenger tournament in Istanbul, Turkey, would be a place where a major international story would fly under the radar. No one was quite sure whether or not the tournament would even happen until it actually did. The country of Turkey has a professional tennis tournament (usually Futures-level) scheduled just about every week of the year. However, every single tournament in Turkey has been cancelled since the mid-July coup. Every tournament until this Challenger, that is.

When the draw was released, tennis aficionados and followers of international sports in general cringed with nerves as the top two seeds were Malek Jaziri and Dudi Sela. Jaziri is famous at the Challenger level for having to withdraw before facing Israeli Amir Weintraub in the Tashkent Challenger in 2013.

There is no need to go into the entire history of the Arab-Israeli conflict here, or even a brief overview of it. Let us suffice it to say that several countries refuse to acknowledge Israel’s existence, including competing against Israel in international competitions. Until recently, Tunisia was one of those countries. In 2013, the Tunisian Tennis Federation told Jaziri that he was not allowed to compete against Weintraub or there could be severe consequences. Jaziri withdrew before the match and the Tunisian federation was punished by the ITF for it. Jaziri’s brother (who is also his manager) was quoted in Israeli media as being shocked that he was told not to play.

Of course, plausible deniability had to be maintained. Even if it’s under orders from his government, world sports bodies do not take bringing politics into sports lightly. Jaziri and his brother knew that the bulk of the punishment would come down on him, so the official reason for his withdrawal was a knee injury. The ITF did not punish Jaziri, but did ban Tunisia from Davis Cup play in 2014. Additionally, Tunisian woman Ons Jabeur is known for withdrawing on several occasions to avoid facing an Israeli.

Tunisia is far from the only country that refuses to face Israel. An incomplete list on Wikipedia (it does not include Jaziri in 2013, for example) lists several dozen examples of countries unwilling to face Israel because that would necessitate acknowledging the country’s existence.

Just a month ago, at the Olympics, this issue was brought into the spotlight several times. The most famous example was in Judo, when Egyptian Islam el Shehaby refused to shake the hand of Israeli Or Sasson after their fight. What is far less well-known, though, is that just over a week ago in the Paralympic Games, the Algerian goalball team refused to play against the Israeli team, instead forfeiting the match.

Jaziri is actually friends with both Sela and Weintraub. Sela was quoted in an interview last year as saying that, “I think things now are changing as the federations have changed someone and from what I’ve heard we can play next time.”

Sela was right, it turns out. When the first ball was struck, there was no applause or real cheer. The fact that, from a tennis standpoint, Jaziri’s 1-6 6-1 6-0 win was played at a pretty low level shouldn’t matter. This match, the fact that even one ball was struck, was tremendous.

Tennis isn’t going to solve the world’s problems, and it certainly won’t fix the Arab-Israeli conflict. But Sunday was a strong indication that things are moving in the right direction for the two sides recognizing each other. Jaziri should be congratulated for his win–his second Challenger title of the year–but his country should be congratulated even more for allowing the match to take place.

Moving towards world peace doesn’t have to happen with big symbols or with giant crowds and thundering applause. Sometimes tremendous moves can be made on a small tennis court with just a few fans who may not even realize the importance of what they are witnessing. It may have been a tennis match worth just a few ranking points and a bit of prize money, but to the countries of Tunisia and Israel it was so much more.