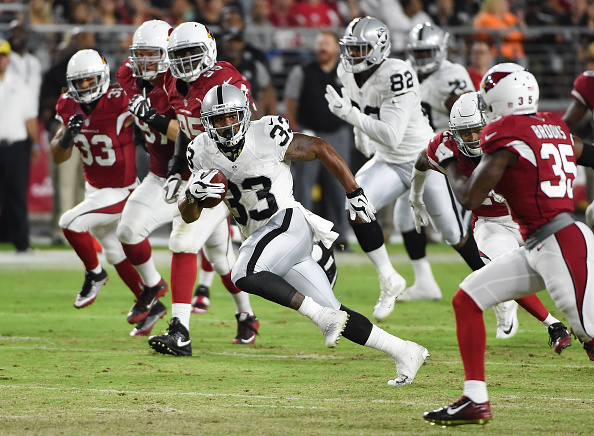 A certain player averaged just 2.2 yards per carry in the fourth quarter last season. This player also scored five of his six rushing touchdowns within his first ten carries of the game. Of the 15 running backs with 200 or more carries last year, no one was stopped before gaining three yards more consistently than this running back (49.6 percent of the time, 132 of 266 carries). All credit goes to ESPN fantasy guru Matthew Berry for providing these stats. Without naming him yet, does this seem like a running back that should be the starter? Latavius Murray had some issues last year, and the Oakland Raiders might have a solution to his issues: the bench.

Two months ago, an article was published on how the Oakland Raiders run game should be improved in 2016. With the addition of left guard Kelechi Osemele in free agency and the drafting of running back DeAndre Washington, as well as the fact that Latavius Murray is in a contract year, Murray seemed primed to have a big year in 2016. Osemele is going to bring power, size, and nastiness to the inside of that line and create some large holes for the running game that weren’t there last year.

A big issue in 2015 was the fact that the Raiders did not have a reliable back to compliment Murray. He carried almost the entire rushing load. Murray had over 70% of the Raiders carries, with 266 attempts. Quarterback Derek Carr was second on the team with 138 yards rushing. Carr is athletic enough to scramble a bit, but he is not a dual-threat quarterback. The Raiders needed to find another running back to form a one-two punch with Murray in the backfield, and they did that by drafting Washington. However, another issue has arisen: DeAndre Washington looks good. He looks REALLY good.

All signs pointed to Latavius Murray getting the lion’s share of the carries. Murray is currently the lead back heading into Week One, but there might not be a huge difference in workloads between Murray and Washington as the season progresses. When watching preseason, it’s easy to get caught up in the hype of a player and expect them to be a superstar just because they played extremely well in those four meaningless games. However, preseason still provides people with tape to see who has talent and can play. In the brief four game samples, Washington displayed more skill than Murray has shown.

There are two things that Latavius Murray is not good at. The first is catching the football. Washington had a 32-yard catch against the Arizona Cardinals in his first preseason game, and caught a six-yard touchdown pass when the Raiders played the Tennessee Titans. In the four games, Washington caught nine passes for 68 yards, along with the touchdown. In his four years at Texas Tech, Washington caught 124 passes for 1,091 yards, scoring four times. Washington has very reliable hands, and runs routes like a wide receiver.

On the other hand, Latavius Murray has struggled in the receiving game. The stats say that he had 41 receptions to only three drops last season, but the numbers don’t tell the whole story. Murray is a bad route runner, often looks unprepared to catch the ball, and it really seemed like he had more than three drops last year.

The problem with Murray is his lack of burst, which Washington absolutely possesses. Washington broke for three 20-plus yard plays in four games in preseason, and displayed speed and explosiveness that has rarely been seen from Murray. With all the holes that the Raiders massive offensive line will create, Washington seems to be the best fit player to break through and make huge plays. Murray is a fast running back, but that speed all goes to waste when he can’t find the holes. He doesn’t have the vision to find the holes, or the burst or quickness to cutback and change direction to get to those openings. DeAndre Washington does.

Murray was one of the most inefficient players in the league last year, let alone his rank among running backs. Murray holds the starting job right now, and will have every opportunity to show that he deserves to keep that role. He is in a contract year and has a lot of motivation to prove himself. However, determination only goes so far, and DeAndre Washington’s talent speaks volumes. Washington’s role in the offense will continue to expand, and he could take over for Murray as the feature back on the Oakland Raiders sooner rather than later.