The San Jose Sharks second round key to success against the the Nashville Predators lies at home plate. Not home plate in the traditional baseball sense.  Home plate in the area in front of the goaltender that looks, as you might have guessed, just like the home plate at your favorite baseball field.

It is no secret that the NHL’s second season is not the time for beautiful goals. Much of the time it is the types of dirty or greasy area goals that propel a team to a series victory. Throughout the 2015-16 season, it was exactly these kinds of goals that the Predators had a greater difficulty in stopping.

Pekka Rinne’s season was not his best. His .908 save percentage was the second worst of his career with only the injury and infection marred 2013-14 campaign being statistically worse.

Despite the regular season struggles, his overall play in seven games against the Anaheim Ducks have nearly seen a return to his expected form, finishing with a .915 save percentage.

Few goalies can post highly consistent statistics year over year, so just looking at the 2015-16 season, it appears it is a slightly down year for Rinne. What might make the statistics slightly dip? One area that the Predators have struggled, compared to last year, is in the home plate area in front of the net. Looking at the graph below from War-On-Ice.com, Nashville comes into this series with a below NHL average save percentage in the high danger areas. 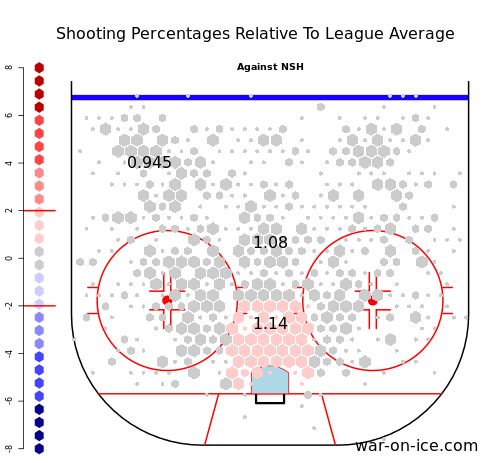 In Nashville’s series against Anaheim, the games that the Ducks were successful, nearly all the goals came in that home plate area. In Games 3, 4, and 5, all of which were Anaheim wins, ten of the twelve goals the Ducks scored were all in this home plate area.

The Sharks have the personnel to exploit this. Joe Thornton is one of the league’s best playmakers, and the line of Thornton, Joe Pavelski, and Tomas Hertl are all extremely dangerous, especially in close. Joel Ward is a big-bodied winger who is 6’1 226-pound frame is still looking for his first playoff goal as a Sharks could literally position himself for a few in this series in front of the Predators net.

Adding to the San Jose side of the ledger, the Sharks possess one of the most dangerous defenders in the game in Brent Burns. When Burns activates from the point, the forwards area can commit to screening Rinne, get to the net and collect rebounds. All of which as we have seen is how teams score goals and ultimately win, especially in the postseason.

For the Sharks to continue their Stanley Cup Playoffs run, they will need to be successful in clogging the ice in front of whatever netminder they face, but especially Pekka Rinne. The key to Nashville’s success over the years has been the steady defensive play that pushes the shots outside of the high danger areas. With a statistically down year for Nashville’s goaltending, The Sharks should take note of the Ducks success in this area and swing for the fences when they get to home plate.