One of the most intriguing playoff match-ups in the Eastern Conference is the Florida Panthers versus the New York Islanders. Before delving into the stat lines, let’s familiarize ourselves with the key contributors on forward and defense for both clubs: 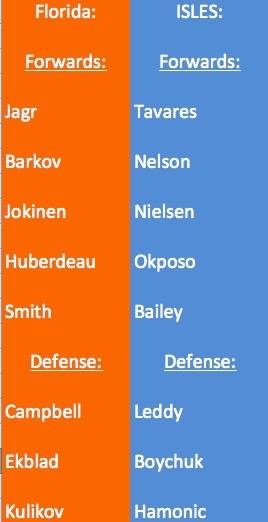 If there is one stat that we can consider to be a reliable indicator of a team’s true performance, it is goal differential. In terms of their goal differential at 5-on-5, score more than you give up, and you win. Do it across a large enough sample size and a trend emerges.

Florida ranked fourth in the East. They generally score more than they give up, and that’s down to a few factors. The first is the offensive contribution they get across their entire top-six group. Florida boasts tremendous offensive depth, with four forwards eclipsing the 25-goal mark, and every member of their top-six notching at least 50 points or better. Most were either right on the cusp of or surpassed the 60-point plateau. While living legend Jaromir Jagr lends a calming veteran presence, he still remains a force whose net-drive is relentless, making him a constant threat. Vincent Trochek (lower body) remains unavailable, however the likes of Aleksander Barkov, Reilly Smith, Jonathan Huberdeau and Jussi Jokinen make for a formidable offensive attack.

The second factor in the series will be the quality of netminding Florida receives. Roberto Luongo has been nothing short of stellar this season, boasting a 2.35 GAA and a save percentage of .922. In 25 games, backup Al Montoya has a sparkling 2.18 GAA and an impressive .919 SV%. Together, they make a very dependable tandem, ranking an impressive fifth overall in the east.

Finally, We look at defense. Florida has a number of weapons on the back end, starting with veteran Brian “Soupy” Campbell. While no longer the offensive catalyst he once was, the smooth skating defender is quite adept at diffusing pressure in the D-zone by making smart, crisp outlet passes or skating it out of his end with the poise that comes with being a savvy veteran. At just 5’10”, he’s survived – and thrived – because of that poise, his intelligence, and the ability to read the play both quickly and effectively.

Former first overall draft pick Aaron Ekblad logs heavy minutes for the cats and at 6’4” and 230 pounds, he has the frame to throw devastating hits, wear down opponents during one-on-one battles and protect the house with aplomb, making life a little more manageable for his goalies. Offensively, he is a solid and regular contributor with a knack for jumping up into the attack when opportunities arise. He’ll be counted on to draw on the maturity and poise that belie his years if Florida is to advance to round two.

Fellow Panthers defenseman Dmitri Kulikov, a 2009 first round selection, isn’t going to wow you with his offensive stats, but what he brings in terms of roster depth could prove invaluable. Kulikov is a mobile, honest competitor with something of a mean streak who will lay the body and do the dirty work to keep the opposition honest in his end of the rink. Don’t mistake him for a shutdown defender however; despite mediocre numbers on the second pairing, he has a strong two-way game and is emerging as a player with a good first pass as well as a hard, accurate point shot.

The Islanders are of course led by franchise centre John Tavares, who is just about as close to the ideal top-line pivot as one could hope for. While he’s competed in just 13 playoff games, he’s put up five goals and six assists for 11 points. Tavares is an imminent threat each and every time he takes to the ice, and the Isles will look to him to lead the charge. He won’t be an army of one, however, as the likes of Kyle Okposo, Brock Nelson, Frans Nielsen and Josh Bailey will likely be key contributors. Anders Lee will be out indefinitely with a broken fibula.

Goaltending will be up to career backup Thomas Greiss and rookie Christopher Gibson to manage until the injured Jaro Halak re-emerges, and this is an obvious concern. Despite Greiss’ impressive stats across 38 games (2.36 GAA/ .925 SV%), Florida has a clear-cut advantage here.

Islanders General Manager Garth Snow redeemed himself for every bad contract he ever signed off on when he acquired defenders Nick Leddy and Johnny Boychuk. I would submit that no two transactions have done more to elevate the Isles’ chances of playoff success than these two acquisitions, and along with Travis Hamonic, who could be a game-time decision, having been out with a knee ailment since March 31.

The following graphic, prepared by my colleague known simply as “Tracer,” gives us a good look at how these opponents stack up by category,  in terms of rank:

Three Keys to the Panthers success:

Three Keys to the Isles’ success:

I predict a hard-fought series with a ton of action in front of both nets. This could get nasty at times, and I think ultimately Florida, with its superior goaltending, will ultimately emerge in six. This should  be one for the ages, however.

Here are other predictions from the LWOS Hockey department: