The 2010s Seattle Seahawks have been known for two things: defense and run game. Both provide the heart and soul of both sides of the field for the team, and it’s the run game that provides the spark needed for Seattle to win games.

Marshawn Lynch, AKA “Beast Mode,” has been a big reason for the Seahawks success. With his hard-hitting yards after contact playing style, Lynch has been one of the league’s best runningbacks since the Seahawks acquired him in a trade from the Buffalo Bills in the middle of the 2010 season.

In week 10 of the 2015 season, however, Lynch went out with a sports hernia injury during a devastating loss at home against the Arizona Cardinals, who are currently on top of the NFC West as of this writing. The loss sent Seattle to 4-5, and there were numerous doubts as to whether they would make the playoffs.

With injuries comes opportunities however, and undrafted rookie Thomas Rawls, out of Central Michigan, stepped up to the challenge and took over as the starting running back for the Seahawks.

Behind Robert Turbin and Christine Michael, Rawls rose up after Michael was traded to the Dallas Cowboys and Turbin was waived after suffering an injury of his own. Rawls, who had two big games against the Bears and Bengals earlier in the season, lit the 49ers on fire the following week, rushing for 209 yards, adding 46 receiving yards, and tallying two total touchdowns and 7.0 yards per game. He was the first Seahawks running back since Shaun Alexander to rush for 200+ yards in a game, and set the franchise rookie record for a single game in addition.

Rawls started for three more games before a fractured ankle on Sunday prematurely ended his rookie season. In total, the rookie had 147 carries for 830 yards (5.6 yards per carry) and four touchdowns. Initially, after watching his performance against the Bengals, I was left unimpressed. While he rushed for 169 yards, he had a few open holes that inflated his overall production.

However, I looked at his game against the 49ers at home, and my viewpoint was changed.

Rawls’ legal trouble in 2014 was likely the reason he went undrafted, because from a talent standpoint, it’s hard to believe. According to a study done by Harvard Sports in 2009, the average weight of a running back is 210 lb. Rawls is 220 lb., barely ahead of the average and Marshawn Lynch, who weighs 215 lb. himself.

Rawls, however, has a unique playing style similar to Lynch. Though he’s above the average weight for a running back, he brings fantastic speed to the table. His quick jump cuts, ability to go headstrong in attempts to get yards after contact, and willingness to stay in bounds lend plenty of highlight worthy runs. It’s the sort of running style that’s made Rawls a folk hero during the 2015 season.

Take, for example, his prolific performance against the 49ers. 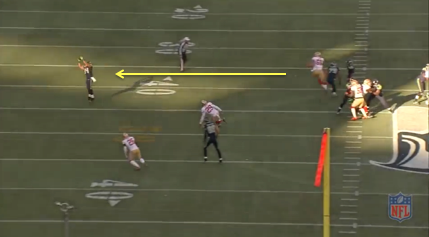 On first and 10 at the 50-yard line, with 11:51 left in the first quarter, the Seahawks called for a screen pass on the right side to Rawls. The play went for 12 yards, but what I’m most impressed by is how Rawls got it. 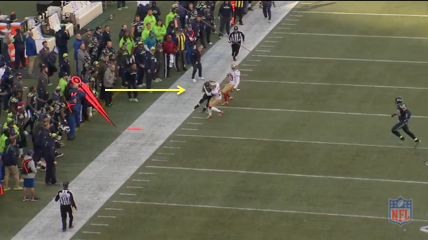 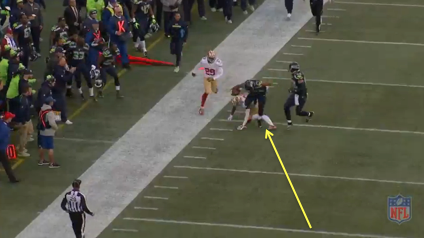 Rawls went fast on the run, then delivered a headstrong ram into an incoming defender, pushing him out of the way, and jumping over him to get the first down. It’s the type of aggressive play the Seahawks sought in receiving once Marshawn Lynch went down, as it’s his exact same style. 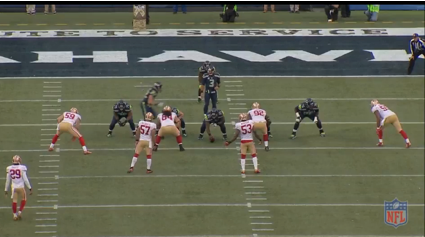 A second example comes with 10:36 left in the 4th quarter. Rawls receives the handoff up the middle on first and ten. It’s an 18-yard gain, and of course, Rawls makes all of it. 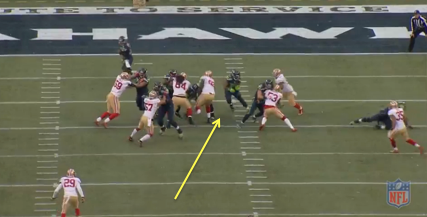 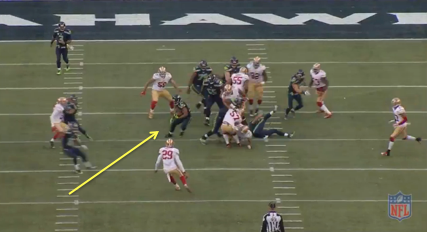 Rawls plays with great anticipation in the short area, so his patience and speed are able to create additional yards, as was the case here.

Rawls currently leads the NFL in yards per attempt, with 5.6 on the year. That’s the most in Seahawks history as well (with a minimum of 100 carries). 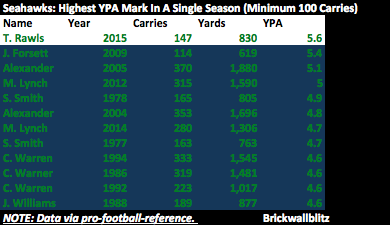 Rawls is above some impressive company. Granted, he doesn’t have the larger sample size Marshawn Lynch, Shaun Alexander, Curt Warner, and Chris Warren had, but he’s had enough carries to be compared to those great Seattle backs.

My only complaint about Rawls is that his stats are a bit gaudier than they should be. A few of his runs have come because of large holes provided by blown coverage, so his YPA is slightly misleading.

Still, this is a running back who has had a great rookie season, and it’s a shame it had to end early. Thomas Rawls’ aggressive play and successful anticipation have been a nice combo, and he gives Seattle a highly promising person for Marshawn Lynch to pass the torch to when it’s all said and done.