The Ultimate Fighting Championship will make its debut in the Saskatchewan province of “The Great White North” on Sunday August 23rd. The SaskTel Centre in Saskatoon, Canada plays host to UFC Fight Night 74, which will culminate with a pivotal five round featherweight bout which could produce a legitimate threat to any 145 pound man on the UFC roster.

Max “Blessed” Holloway, the highly touted 23-year-old Hawaiian prospect is on a six fight win streak. His last loss was two years ago to current interim featherweight champion Conor McGregor. All but one of his six matches were finishes and is coming off his most undoubtedly superb performance to date. Holloway was last matched with perennial top contender Cub Swanson and he made Swanson look like a complete amateur. Holloway dismantled Swanson, he dominated him in every facet of the game and made it look easy. Even after clearly winning 14 minutes of the bout, he still sunk in a nasty mounted guillotine choke just for good measure. Holloway is a huge problem for featherweights right now and the man he’s facing is a fellow young gun who brings his own set of unique problems.

Charles “do Bronx” Oliveira is currently on a four fight win streak with three of his four wins coming by submission. The modified anaconda choke he snapped on Hatsu Hioki last June was named best submission of 2014 by many pundits, and even if you’re not on board with the accolade; the swiftness, timing and ingenuity to pull of something so spectacular on a well-respected opponent like Hioki is nothing short of remarkable. Oliveira’s last win over Nik Lentz illustrated his game in full force and although he encountered a bit of trouble in the second round, he toughed it out and submitted Lentz early in the third round.

In a division full of dangerous and witty strikers, Max Holloway might have the most omniscient striking arsenal. Holloway is a special striker, his game doesn’t bring any considerable amount of flash, but his awareness in the cage and his keen sense of throwing organic, flowing combinations make for an overall package with spades of offensive options that leave opponents feeling hopeless and befuddled.

Holloway might be one of the most adept strikers in all of MMA. There is no place on the feet where he is static or uncomfortable. Holloway is on the balls of his feet at all times, he can switch from orthodox to southpaw seamlessly and with equal effectiveness from both sides. He knows how to close distance well and he is comfortable throwing all eight limbs. Although Holloway seems to have great success pressuring, he’s as good an all-terrain fighter one could ever encounter. Holloway has great counters, his spacial recognition make him an exceptional out-fighter, and his defense, use of angles, and body blows when fighting in-the-pocket is simply outstanding.

“Do Bronx” has a pressuring style of fighting as well, but he lacks the depth of Holloway and is not as knowledgeable or athletic enough to compete with him on the feet for any extended period of time. The longer the fight stays standing, the faster Oliveira’s chances of winning get decimated.

Holloway has tremendous endurance and it is essential to his style of fighting. Holloway is an attrition striker and can either switch up ranges and force opponents to press the action and counter or can continually land heavy volume and body strikes to break opponents’ wills.

Holloway lands over 5 significant strikes a minute which puts him in the upper echelon of high volume strikers. His work rate is astonishing and he knows how to keep a pace without severely fatiguing. Even though this is the first five round fight for both men, Holloway holds the cardio edge due to his intelligent use of pressure and a history of clean weight cuts, unlike Oliveira who is notorious for his problematic weight cuts and slowing down in later portions of fights.

Charles Oliveira’s grappling prowess is another skill set that is as dangerous and unique as Holloway’s striking. Oliveira might have the most unique and entertaining style of grappling in MMA, and that is not to say that it is reckless or lacking in fundamentals. If Holloway is an all-terrain striker who poses problems in any which direction he’s facing you, Oliveira is his grappling counterpart. From his clinch, to his single leg takedown, to his lethal and continual attack of submissions off his back, all areas are covered and all are just as dangerous. Additionally, Oliveira has seemed to learn the importance of patience.

Oliveira was known for getting a bit reckless in his early run in the UFC, but he has refrained from doing some of those poor habits in his recent run. Oliveira now utilizes a bit more of a “position over submission” mindset to a small and varying degree that has worked to his betterment. The record shows that his penchant for strangling and limb snatching are still strong, but we don’t see the foolish decisions like he made with Jim Miller where his eagerness got him submitted. Although his chain wrestling isn’t world-class caliber, Oliveira’s implementation of trips and single leg takedowns is becoming an  ever-improving aspect of his game.

Confidence is also a big factor that plays into the creativity of his grappling process. Oliveira will persistently hunt for standing submissions and always has the option of pulling guard since he was the best guard in the featherweight division bar none. Holloway has a good guillotine but has shown very little outside of that, and getting continually dragged to the mat by Oliveira will not lead to any form of victory for Holloway.

The submissions of Charles Oliveira are such an obvious threat, it often seems opponents are more concerned with avoiding the ground altogether instead of noticing how he gets them there, and the clinch is a giant tool in Oliveira’s toolbox. Oliveira’s stand-up approach is that of a true Muay Thai fighter; plodding, little to no head movement, and heavy emphasis on kicks and knees, but his double collar tie clinch is the root of every significant offensive attack Oliveira is able to land.

Oliveira does everything correctly when grabbing a hold of one’s head in his clinch. The pinch is vice-like, his posture is always in optimal position to land heavy knees to the body and bludgeoning elbows to the head simultaneously. Another aspect that rarely anyone in MMA uses when grabbing a hold of a clinch is submission attempts, but a person who has the vast BJJ knowledge and proficient understanding of how to manipulate bodies like Oliveira can combine the two with great success. As rudimentary as a knee to the body, snapdown of the head and choke is, Oliveira can, and does use this old-school combo and is usually the first step to securing a submission or pushing opponents to the fence for further punishment. Holloway is no pushover in the clinch, in fact he’s quite good, but Oliveira is so strong and determined in this area that it is tough to see him getting the better of exchanges.

The similarities between these two featherweights are sort of eerie, both are young fighters who have a respectable amount of fights on their records, both are very special and fun fighters to watch when they’re implementing their strong suits, and both are hitting their stride right now after being fed to elite competition too early in their careers. One of these men will break into the top five of the featherweight division after this fight, and all signs point that man will be Max Holloway.

Holloway keeps improving fight after fight, and although both men are young and still haven’t hit their primes, Holloway is the one who clearly looks hungrier and more determined to close the gap between him and the top four men in featherweight division.

Holloway has had a habit of starting a bit slow and Oliveira always comes out strong. The first round could be a strong one for “do Bronx,” but Holloway’s innate ability to adapt should pose problems for the Brazilian. Holloway will start to push the pace and punish him with body blows through the remainder of the bout, that should lead to a fatigued Oliveira to succumb to a mercy kill type stoppage in the latter half of the fight. 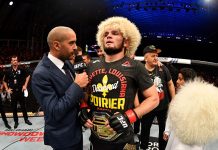