The Boys at the Hammer feature weekly coverage of all things MMA. They have one of the premier radio shows in the world of MMA broadcast weekly on Wednesday nights on 93.3 FM, CFMU. This week they are back with a new episode and you can listen to the archived podcast by clicking here. Hammer Radio 133. 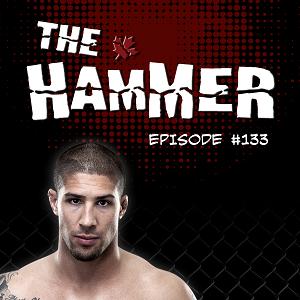 It’s an absolutely packed show this week (our longest ever), and we’re discussing the first ever UFC Women’s fight coming up this weekend. UFC 157: Ronda Rousey vs. Liz Carmouche headlines a pretty stacked card that also includes an important light heavyweight fight between Dan Henderson and Lyoto Machida, as well as fights featuring Urijah Faber, and Josh Koscheck.

We follow that up with a recap of last weekend’s UFC on Fuel show featuring the Interim Bantanweight Champship Fight of  Renan Barao vs. Michael McDonald, the news in Bellator, Rory MacDonald’s injury and the changes to the UFC 158 card, Cris Cyborg Santos in Invicta, the new official UFC Rankings, and a ton of surprising fighters cut this week, including Jon Fitch.

The Hammer has had interviews with some of the biggest names in MMA over the years, including BJ Penn, Dan Henderson, Sean Sherk, Mark Coleman, Rory MacDonald, Brendan Schaub, Mark Bocek, John Makdessi, Mark Hominick, Martin Kampmann, Johnny Hendricks, and others.

They continue to bring unparalleled, independent coverage of all things MMA to fans of the sport and they always bring you straight good and the last word.