Welcome back to another installment of Essential Hockey.  We have another busy week of action to review, so let’s get down to business and cut the small talk.  We have almost every team at 10 games or more played, and it’s time to highlight some of the things that went down over the last week.

Raffi Torres did the right thing; he stepped up to a fight, and actually did reasonably well.  So will we hear about him and Hossa ever again?  Tim Thomas had a disastrous contract for about every team in the NHL – except the Islanders. Since Tim Thomas isn’t playing and the Islanders aren’t paying, his contract is a very unique situation that offers a financial safety net to the Islanders who are floating at the poverty line of the NHL. We have another rookie that is looking dangerous – J.T. Miller.  He scored two in his debut, providing the Rangers desperately needed secondary scoring. Jaromir Jagr is still scoring, and he is now tied for 10th all time with Luc Robitaille.  Every time he creeps up the all time lists, it begs the question “What if…?”.

Snapshot of the West: The mighty Sharks seem to be mortal as they are on a 3-game losing streak and Patrick Marleau is without a goal in 5 games.  The Nashville Predators have found the Staples easy button and are scoring and winning again with a four-game winning streak going.  The Edmonton Oilers’ Dubnyk is playing some very good hockey and it is sort of a shame that the team in front of him is not, as they have slid down the standings with four successive losses.  The St.Louis Blues are singing the blues right now as losers of three games in a row for the first time in regulation since Feb. 27 to March 5, 2011. The injury to number 1 goalie Jaroslav Halak looms large.

Snapshot of the East: The Atlantic is rushing to the top of the East as the Pittsburgh Penguins are on a five-game winning streak and Crosby/Malkin are top six in scoring right now.  The New Jersey Devils are on a 3-game winning streak, while the Washington Capitals seem like they will be permanently occupying the bottom cellar of the east after a huge beat-down by Penguins and are now losers of three in a row (zero sold goaltending in DC right now).  The New York Rangers have one point more than the New York Islanders after 10 games and a victory over the Isles, yet both teams are looking in and not out of the top 8.  Phil Kessel scores a big goal for the Maples Leafs and not only extends their record to 4-2 in the last 6 but also keeps them in the playoffs…for now.  The Boston Bruins are sitting 2nd in the East right now and Rask is looking so good that Tim Thomas’ contract has been traded to the Islanders for a box of fish sticks.  Ottawa is devastated by the loss of Jason Spezza and probably their playoff hopes, while Montreal Canadiens fans are enjoying their team in the top 8, and having P.K. Subban back in the fold as well as seeing Markov’s healthy knees has made everyone happy in Habs-land (everyone except Ryan White that is).

The big puzzle to me continues to be the Buffalo Sabres and specifically what is going on with Ryan Miller.  You probably know Ryan Miller as one of the best American born goalies and one of the few goalies to go very early in NHL Fantasy drafts. He is a franchise goalie that can, and has, put up ridiculous Vezina numbers in net. The problem is that this year he has not been anything as advertised above. Ryan Miller started the season with 2-1 record while posting .951 SAV%, but then the wheels started to fall apart. It is hard to say what exactly ails him, but in each of the last five games he has given up four or more goals, and while his team has won two of those games mostly due to Vanek’s superhuman heroics, the goaltending has to improve somehow. Keep an eye on this going forward as Miller showed that he can still play at a phenomenal level after the “Lucic hit” where he posted .938 SAV% in January and .930 SAV %  in February. It will be interesting to watch how both Vanek and Miller play as the season progresses.  My guess is that Vanek will come down to earth and Miller will rise back to that elite level. Vanek is scoring any way possible by the way, as seen here where he tallies even on his knees:

Last week it was the Devils and Islanders who battled over the weekend, and this week we have Penguins and Devils going at it for the Atlantic. With a possible four point swing for either team, this will be an all out war. Penguins have played 11 games and have 1 point lead over the Devils, who have only played 10 games. Two victories here by any club would be huge especially down the stretch in this shortened season. Both teams will carry winning steaks into the weekend, and while Crosby and Malkin are flying high for the Pens as expected, the Devils have been winning in a bit different fashion; not only with superb special teams, excellent goaltending, but with getting scoring from unlikely sources. David Clarkson leads the team with 7 goals – yes, David Clarkson has seven and not Ilya Kovalchuk. This should be an exciting weekend for fans of both franchises and I am sure some very civil conversations between fans.

While everyone is paying attention to how good the Hawks, Pittsburgh and Boston are playing, I would like to point at the Ducks and start screaming uncontrollably. This team is on a 4-1 run right now with some sick goaltending by Viktor Fasth.  I know..  I thought he was a Bond villain too at first, and while you may not be particularly familiar with him, he is posting something like 4-0 record with .98 GAA and .962 SAV%. Whether he challenges Hiller for the number one spot is yet to be decided, but his fantasy ownership numbers are most definitely up. This guy seems to just come out from nowhere.  I am sure someone will surely  point out his track record in the comment section below, but most of us are not very familiar with him as you know – who pays attention to California teams anyway? He gives a very solid option to the Ducks, who have been scoring goals at a nice pace anyway. With this short season it is a blessing to have two goalies who are competing for the number one spot and it has become more and more common for teams to roll the “hot” goalie now days.

While Huberdeau may got the best of Bryzgalov in a shootout, he has had trouble finding consistent scoring unlike other rookies. Cory Conacher is leading the way with 12 points in 10 games, Vladimir Tarasenko is second with 10 points in 10 games, and after a slow start the number one draft pick, Nail Yakupov, has 8 points in 10 games. Alex Galchenyuk and Marcus Foligno both have 7 points followed by Brendan Gallagher, Jonathon Huberdeau, and Justin Schultz with 6 points. The race is heating up but after 10 games we see tons of rookies being very effective. Important to note that Justin Schultz, Jonas Brodin, and Jordie Benn are all playing over 20 minutes a game.

Check out our take on the Devils continued success, NY Rangers power play struggles, the dominant way in which the Hawks started the season, and the surprisingly awesome Leafs rookies!

This stat is just mind blowing…kind of. (via Reddit) 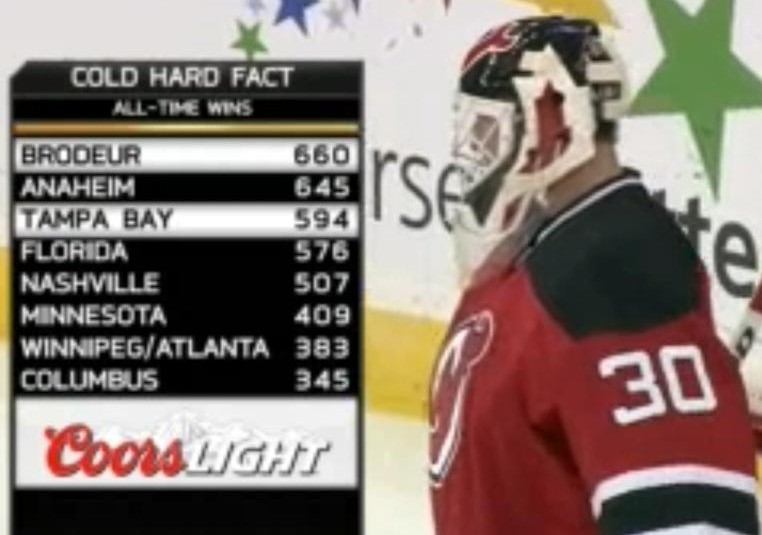