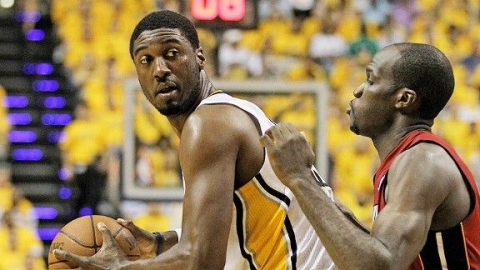 The Pacers may have been knocked out of the playoffs in Game 6 of their series against the eventual champions, the Miami Heat; however Indiana performed well enough to make a mark on the NBA and claim a powerful position in the East. A 42-24 season record is impressive, and no doubt they showed playoff brilliance, especially when only ten minutes away from leading Miami 3-1 in the first series. Following an exciting off-season, the Pacers have become the new Moneyball team of the NBA and look to make a drive to the playoffs this upcoming season.

A number of key additions were made to the team that will make them a force in the upcoming season. DJ Augustin was added, and will look to become a back-up guard to George Hill. The exciting Gerald Green, whose pairing with Paul George, unleashes a whole array of dunking possibilities. Orlando Johnson and Ian Mahinimi were brought in from Dallas. All of this said, nothing is more enthralling than the re-signing of Roy Hibbert for Indiana; Hibbert has a tiring work ethic and has improved dramatically each season – he could become a dominant big-man throughout the whole NBA given the time.

The Pacers have an offence that can be matched by few in the league. With an incredibly talented roster featuring Danny Granger, Gerald Green, Roy Hibbert and George Hill, the Pacers have a star-studded team that can play with the best on any given day. Indiana have a dangerous perimeter team (with the likes of Hill, Augustin, George, Green and Granger) all exceedingly talented in defending the backcourt. Hibbert and West are both powerful and strong in the paint, so the Pacers boast an equally potent front court.

A key factor to the Pacers success this year lies in Paul George’s hands. Everybody remembers his great rookie year, specifically when he dominated the Bulls during the playoffs. But he has never really stepped up and made a significant improvement since then – something that many are expecting this year. While it is known that Hill, Granger and West will step up every night, the real question is: can George? And will he lead the team to the playoffs?

With the Bulls sure to struggle this year, the Pacers will surely lead the Central Division and may even make a huge push to the top four in the Eastern Conference. Don’t predict a championship for this team, but certainly expect maybe a 54-28 record year and contenders to slip up against the talented Pacers.

… and that is the last word.