Despite playing a losing part in the all-American US Open 2017 semi-finals – the USA are indubitably indebted to Coco Vandeweghe for earning her team a trip to Minsk to face Belarus in the Federation Cup final, on 11-12 November 2017.

American captain Kathy Rinaldi-Stunkel will have a few headaches trying to select her final team, from a roster of players in great form. Obviously, on the doubles side they will miss Bethanie Mattek-Sands, as she is still out with the horrific injury sustained at this year’s Wimbledon. Mattek-Sands’ chemistry with Vandeweghe was palpable against the Czechs. This came out in the key doubles rubber in the semifinal in Tampa Bay. The pair destroyed the Pliskova sisters, contributing to a tight 3-2 match victory over the top seeds. Rinaldi-Stunkel will not take any chances for the visit to Minsk. Belarus, despite not having the highest ranked players, oozes enviable team spirit. They will be difficult to conquer on their own soil.

Youngster Aryna Sabalenka will seek to build on her semi-final heroics for the hosts.
The beauty of the Fed Cup in its current format was highlighted in Belarus’ surprise victory over the Swiss in the semi-finals. It made a heroine out of the talented teenager Sabalenka, who more than made up for a 2nd rubber defeat–by outslugging Viktorija Golubic in three thrilling sets, to seal the final berth for Belarus.

The team spirit required for Fed Cup success goes hand in hand with Sabalenka’s feisty nature. This often comes out in the form of verbal rebuking in Belarusian. Sabalenka’s strong personality and strength of character will be key for the hosts. 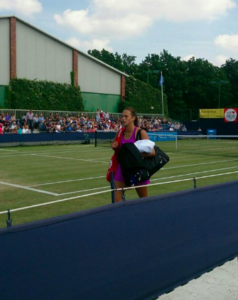 Her singles counterpart on the path to the final has been 23-year-old Aliaksandra Sasnovich, who won her two singles rubbers in the semis against Switzerland. She currently holds a 9-3 record on indoor hard-courts in WTA events and the Fed Cup combined this year.

For Belarus, the question is will they remain loyal to Sabalenka and Sasnovich, or will Victoria Azarenka be available for selection? Given the fact that Azarenka recently withdrew from the US Open in order to fight a custody battle over her son and has not played since 10 July 2017, her participation/selection certainly hangs in the balance, but her big match experience would be an asset.

For the USA, it’s a different kettle of fish. Expectations will be high for the USA given their recent domination at the US Open. This will make them confident of securing their first Fed Cup title in 17 years.

The million dollar question is who will be selected for the USA? It would be a surprise if the person responsible for getting them to the final, Coco Vandeweghe, wasn’t at least part of the squad. That said, Madison Keys and Sloane Stephens, who contested said US Open final, would not have been available for selection for other matches this season because of injury. Madison Keys’ luck with injury recently worsened. The American had to receive attention to her wrist during her WTA Wuhan 1st round defeat to compatriot Varvara Lepchenko.

Whether or not this latest setback will preclude Keys from lining up for USA, if selected, remains to be seen. There is the loyalty factor: Alison Riske, Shelby Rogers and Lauren Davis have all played their part in the Fed Cup this season. Riske has also partnered Vandeweghe in the doubles. However, Vandeweghe’s most successful doubles partner this season has been 36 year old compatriot Abigail Spears – the pair won the doubles tournament in Stanford, and Spears has twenty doubles titles to her name. Spears must enter Rinaldi-Stunkel’s calculations for what could be a key doubles rubber.

Then there’s Venus Williams. Rinaldi-Stunkel has often spoken of her relationship with the Williams sisters and works to ensure that their schedule is respected but they play when they can. Venus, naturally, is not playing as many tournaments this year and has not featured in this year’s campaign. Having recently qualified for the WTA Finals in Singapore, Venus’ schedule has grown and that event may now be her focus. However, given her Olympic success at representing her country – there will be many Americans hoping to see her name when the teams are published.

Given the fresh injury to Keys, it may be Sloane Stephens or Venus Williams who become candidates to make their seasonal Fed Cup debut. Whether or not Rinaldi-Stunkel will want to risk unsettling the current team spirit too much remains to be seen.

For Belarus, the burning issue to be resolved on squad announcement day is Azarenka or not? Should both teams remain unchanged, with the exception of the injured Mattek-Sands of course, then a competitive no-holds-barred contest would be guaranteed. Sabalenka v Vandeweghe would definitely be a powerhouse struggle to savor. Dispite the USA being favored by many to lift the trophy, the Fed Cup, undoubtedly, still hangs in the balance.