The South African European rugby introduction was a success last season, with the Stormers winning the United Rugby Championship. How are the teams doing this season?

The URC and the Heineken Champions Cup both still have a way to go, but we have seen enough to be able to make some fairly accurate assumptions. 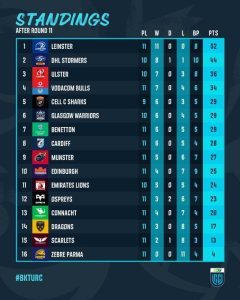 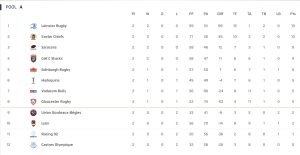 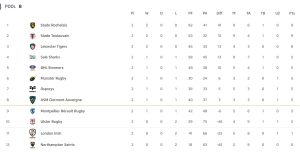 With the standings above to provide context, Ryan Jordan comments on each of the South African European rugby contestants. The teams are listed alphabetically using their commonly used names same to sort them.

The Bulls appear to be starting to struggle a bit in both the URC and HCC this season. They do not inspire much faith that they can emulate their URC success of last season by competing in the final. Their first attempt at the HCC is likely to end up in a quarter-final away from home.

This is a Bulls team very short of marquee players and big-name Springboks. They were given a big wake-up call when they were pitched against the Sharks and the Stormers who had their full deck of Springboks available to them. There is no doubt that they have some exciting young players, mostly in the backline, who have international careers ahead of them. Some of them have already tasted Test rugby.

Coach Jake White has repeatedly said that he is currently building depth with young and inexperienced players. We can agree on that, but that depth does have a lot of sameness in quality to it. They are unlikely to be competing for European silverware for a while.

The Lions were on fire when they started their URC campaign. After an opening loss to the Bulls, they won three on the trot in Europe. Die-hard Lions fans could be excused for hoping that their glory days under Johann Ackerman were about to be revived. This turned out to be a false hope though and the Lions hurt their campaign by struggling to win their home games.

The Lions squad is generally young and inexperienced but does contain players who promise a lot for the future. The youth of this squad can mostly be attributed to the fact that most players have worked through the Lions’ youth structures.

The biggest issue facing the Lions is an exceptionally high error rate. Coach Ivan van Rooyen must be pulling his hair out at the number of promising attacks destroyed by a dropped ball or a forward pass.

The Sharks might just be heading for a season of two halves. They certainly weren’t great in the first part of the season. Coach Sean Everitt paid the price for that and Director of Rugby Neil Powell took over the reins. It was the return of the Sharks’ significant Springbok contingent that turned their season around.

There is a warning in this though. There is a significant gap between the Sharks with the Boks and the Sharks without them. This is not a criticism and what appears to be a mature and professional management group that will continue to build on its depth to ensure that it can be a serious contender for not only URC honours but also setting its sights higher. The ultimate prize for the South African European rugby incursion is success in the Heineken Champions Cup.

The Stormers continue to surprise friend and foe with their success in European rugby. They are the current URC champions and are currently second on this season’s table. After three games, they are in fifth position in group B of the Heineken Champions Cup. They do stand a realistic chance of at least a home quarterfinal.

The Stormers have managed to keep their off-field administrative problems there. Off the field, they have not lost at home for over a year. Along with the Sharks, the Stormers appear to be the teams best placed to actually make an impression in the Heineken Champions Cup over the next two or three years.

The Lions do not compete in the Heineken Champions Cup. They compete along with the Cheetahs in Pool B of the second-tier Heineken Challenge. After two rounds, the Lions are in second position and the Cheetahs are in fifth.