Ahead of the Champions Cup Final, Exeter Chiefs’ Stuart Hogg appears to be brimming with confidence. He has taken this side to the next level this season and into uncharted territory this weekend.

However, when speaking to David Challis ahead of a historic clash with Racing 92 he did not seem satisfied with what his side have achieved. Exeter and Hogg want to go home better, as he spoke of what this means for the club, the prospect of player burnout, and coming up against Finn Russell.

The more you consider this clash, the more you realize that these sides’ are actually quite similar. Pushing aside slightly misled claims of Exeter as a boring side due to their effective ‘pick and go game’ then you are left with two sides built on titanic packs flanked by mesmeric backlines.

This is something Stuart Hogg agrees with, describing Racing as “very similar to ourselves” and you can see why. However, perhaps alongside Stuart Hogg for Exeter, the key man will be another Scotsman in the form of Finn Russell in the final.

This will be the first time Hogg and Russell have taken the field together on opposite sides since they were teenagers. The Lions fullback was wax lyrical about his countrymen’s talent on the pitch describing him as “one of the best tens in the world”.

This makes the matchup between Russell and potential England call-up Joe Simmonds another mouthwatering clash. This was something Hogg was quick to point out, noting what a big test this weekend would be for young Simmonds.

Could this be the battle that decides which way the #HeinekenChampionsCup goes? 👀

Stuart Hogg continues to love life in the South West

Every time Hogg has spoken to the media this season he has extolled the virtues of his new club and life in the South West of England. “From a rugby decision its hands down the best thing I’ve ever done”

Exeter’s sharp success with Hogg’s involvement will no doubt have an impact on his views of the club. However, with fellow Scots Sam Hidalgo-Clyne and Johnny Gray also joining the ranks this is unlikely rhetoric Hogg brings out just for media purposes.

Hogg played down his involvement in enticing his fellow countrymen to the club. However, did note that “it’s easy for the likes of Johnny Gray and Sam Hidalgo-Clyne to sign on the dotted line”.

It seems that the move has been more than a success for Hogg as he looks to make history with a side that just over a decade ago was in the second tier of English rugby and now stands on the precipice of becoming the kings of Europe.
Embed from Getty Images

Exeter may have the slight advantage of playing relatively close to home. Hogg played down this but, he did say “it’s not our home patch but it’s as close to Sandy Park as you can get”.

No doubt this could play a role, as could potential coronavirus disruptions that the Parisians have faced. As all good finals involve a multilayered storyline but, this one seems so interwoven it is hard to pick a winner. Despite all the similarities between the sides, Exeter sticks out as a bastion of consistency. Whilst Racing err on the side of flamboyance.

One suspects if the game sticks within a normal script Exeter will grind their opposition down over eighty minutes. However, that is what Saracens looked like they would do for 76 minutes in the semi-final, until a moment of Finn Russell magic. Racing is so accustomed to producing those moments of magic it almost normal to them.

The old cliche can be rolled out again in that ‘big moments decide big matches’. In this case, it seems that ‘the fewer big moments the better’ for Exeter. Whilst if Racing can produce the magic, then they could run away with a title they will feel is their destiny. One that is as much Exeter’s too. 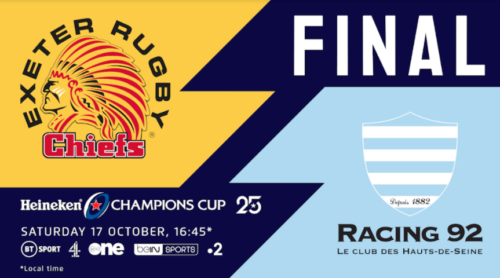 For men like Stuart Hogg, the 2019/20 Champions Cup is a chance to cap a sensational season par excellence.