In support of ‘developing inspirational leadership’ World Rugby is committed to supporting the development of female coaches in the sport. Qualified teams for the  Rugby World Cup 2021 will participate in the opportunity to identify female coaches in this innovative program.

Six countries are the first to put forward their nominated interns, who will see their coaching skills tested, enhanced, and supported. World Rugby General Manager for Women’s Rugby Katie Sadleir said: “We are delighted to see all qualified participating unions take the opportunity to expand and diversify their coaching teams for Rugby World Cup 2021 and continue to support the development of female coaches through the Coaching Internship Program.”

News of the ongoing investment in female coaches follows on men who have been hosted by International sides and the Premiership. Mose Timoteo has gone through Premiership Level 300 training program, coaching sessions, and with this ongoing drive to develop female coaches, it will grow the number of qualified leaders.

“Creating quality deployment opportunities for female coaches is a crucial and necessary step to ensuring they have relevant, meaningful experience, which we know is a barrier for female coaches when applying for high-performance coaching positions across both the men’s and women’s game.”

Six women have been named to join teams in their preparations for the 2021 tournament. 12 months out from the New Zealand-hosted tournament, the opportunity couldn’t be any better. 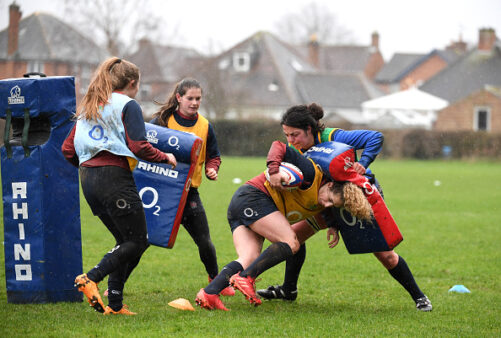 With increased coaching presence within clubs, Universities/Colleges, and at the representative level, it is only a matter of time before a qualified head coach is appointed. Women contribute already in so many ways, in management and in fitness and assistant coaching positions, the next step is a senior, high-performance role.

World Rugby women’s advisory committee chair Serge Simon added: “The Coaching Internship Programme is a simple but effective way to accelerate the professional development of high-performance female coaches. Congratulations to all who have been identified by their respective unions to participate and we look forward to following their journey as they are embedded into Rugby World Cup 2021 senior coaching management teams.”

Fiji, New Zealand, and Wales will confirm participating female coaches at a later stage this year and the remaining three teams to qualify for Rugby World Cup 2021 will also be afforded the opportunity to identify female coaches to participate in the innovative program.