Professional wrestling factions seldom see top-level success across the board for their members. More often than not, while the members of these groups provided value in their own ways, only one or a select few stars reach greater heights. From the Four Horsemen to the New World Order to D-Generation X, not all members can claim to be world champions in their respective organizations. With that said, there have been exceptions to the rule, Evolution being one such case. A more recent example, however, saw all three members become game-changing stars in not only World Wrestling Entertainment but wrestling across the board. On this day, 10 years ago, Seth Rollins, Dean Ambrose, and Roman Reigns debuted in WWE as The Shield.

During the early 2010s, Seth Rollins, Dean Ambrose, and Roman Reigns signed WWE developmental deals. Whether in Florida Championship Wrestling or, later on, NXT, these three men were featured in different ways. Wrestling fans in tune with these brands would have seen Rollins, Ambrose, and Reigns grow, learning under the WWE umbrella. Rollins became the perennial workhorse, putting on matches that fans of his time in the independents and Ring of Honor were familiar with. Ambrose’s promos, which he honed during his independent career, were his bread and butter, even targeting William Regal and Mick Foley. Reigns was the wildcard, having no prior wrestling experience like Rollins and Ambrose. Nonetheless, the once aspiring football player grew, which was indicative of his dedication and coachability.

As 2012 was coming to a close, Rollins, Ambrose, and Reigns were in different spots from a developmental standpoint. Rollins was the first-ever NXT Champion, not to mention the brand’s top babyface. Reigns portrayed a villainous, self-absorbed character, a precursor of sorts to his “Tribal Chief” persona he debuted in the summer of 2020. Meanwhile, Ambrose was absent from NXT programming, which was peculiar given his character work in FCW beforehand. What did the future hold for these three men? Would they be given the opportunity to thrive on the main roster, or fizzle out and fade away like others before them? The answers to these questions began at Survivor Series, which took place on November 18, 2012.

Live from Bankers Life Fieldhouse in Indianapolis, Indiana, WWE held its annual Survivor Series event. The undercard was fairly routine, with matches such as Antonio Cesaro successfully defending the United States Championship against R-Truth and the traditional 5-on-5 Survivor Series bout filling the time. However, the lion’s share of the WWE Universe’s focus was on the main event. The nefarious CM Punk was set to defend the WWE Championship against company stalwart John Cena and Ryback, the latter of whom had been enjoying a burst of momentum around this time. During this period, there was no bigger main event that could be put on featuring full-time talent.

The aforementioned main event, which lasted just shy of 18 minutes, approached its conclusion when Ryback executed the Shell Shocked on Cena. Moments before, Ryback put Punk away with the same finishing maneuver. It seemed that the WWE Championship was within inches of the singlet-wearing powerhouse’s grasp. Suddenly, three men dressed in black stormed the ring to attack Ryback, the assault spilling to the outside area. The assault escalated as the three men, identified by commentary as Seth Rollins, Dean Ambrose, and Roman Reigns, triple powerbombed Ryback through the Spanish announce table. This allowed a weary Punk to crawl toward the fallen Cena, covering the Hustle, Loyalty, and Respect-touting Superstar for the pinfall to retain the WWE Championship. While Punk ended the match as WWE Champion, the wrestling world was buzzing about the group that would become known as The Shield. 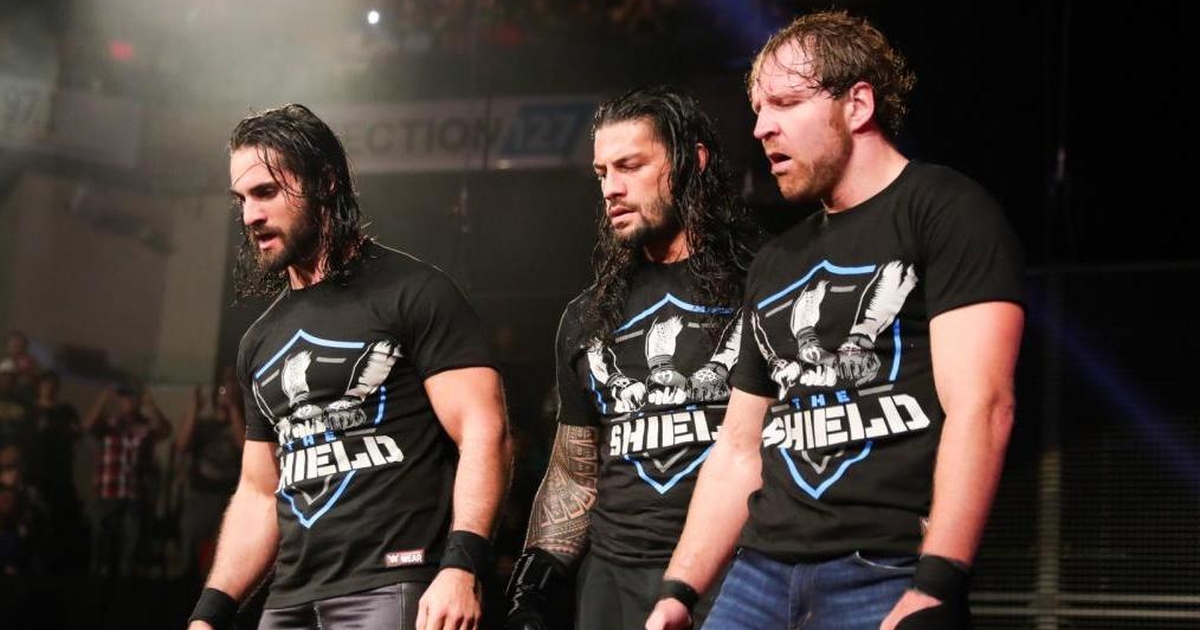 “We’re a Shield From Injustice.”

On the November 26, 2012 edition of Monday Night Raw, Michael Cole interviewed Seth Rollins, Dean Ambrose, and Roman Reigns regarding their recent actions. When Cole asked whether they were working directly with CM Punk, Ambrose denied the claim. Rollins added further context, believing that the company’s inclination to listen to the WWE Universe was wrong, seeing it as nothing but a popularity contest. Ambrose followed up, viewing Punk’s title defense at Survivor Series against two men he already bested as an injustice. Thus, they were a “shield from justice,” or to be more specific, The Shield. Reigns was largely silent throughout the interview, though his powerful presence intensified the intimidation factor this band of renegades possessed.

Despite being portrayed as villains, whether in association with CM Punk or, later on, The Authority, The Shield became one of the most popular acts in WWE. The trio’s debut match took place at TLC later that December, where they faced Ryback and Team Hell No, the latter team consisting of Daniel Bryan and Kane, in a traditional Tables, Ladders, and Chairs Match. Not only did The Shield win said match but it was arguably the best bout of the night. The Shield would also make sporadic appearances on NXT, Rollins continuing to hold the championship until being bested by Big E Langston in early 2013. Despite this setback on the black and gold brand, The Shield’s popularity continued to rise, securing tag team and singles titles alike. As a result, the trio couldn’t stay villains forever, turning babyface in the spring of 2014.

Furthermore, The Shield became involved in some of the most well-received matches in WWE at the time. Rollins, Ambrose, and Reigns seemingly breathed new life into the tag team scene, such as against Team Hell No, The Wyatt Family, and Evolution. Each member of the group had a key role to play, such as Rollins executing high-flying techniques, Ambrose exchanging punches and kicks as an intense brawler, or Reigns putting the exclamation point on the group’s assaults with explosive offense. The group could be relied upon to put on excellent matches, which only helped them as they branched off as singles stars.

The Shield holds the unique distinction of being only one of few factions which saw each member become world champion in WWE. Ambrose held the WWE Championship once, cashing in his Money in the Bank opportunity against Seth Rollins, who captured the title from Roman Reigns moments earlier at the 2016 Money in the Bank event. Rollins is a 4x world titleholder in WWE, winning his first WWE Championship by cashing in during the main event of WrestleMania 31. Reigns has captured a staggering 6 world titles during his career in WWE; as of his writing, he’s the first, and only, Undisputed WWE Universal Champion.

The group’s success continues even outside of the parameters of WWE. In April of 2019, Ambrose’s WWE contract expired, which led to a new legacy being crafted under his previous ring name of Jon Moxley. Moxley worked for independent organizations and New Japan Pro-Wrestling, but more importantly, he became arguably the top star in All Elite Wrestling. In fact, Moxley became, in the eyes of many, a bigger star in the latter organization than he did as Ambrose in WWE. For context, he’s the only man to capture the AEW World Championship on 3 occasions.

As for Rollins and Reigns, WWE continues to be kind to them. Today, Rollins is the nefarious “Visionary,” wearing outlandish outfits and acting maniacally, often to the joy of fans in attendance. Rollins has enjoyed success as this character, most recently besting Bobby Lashley to capture his second United States Championship. As mentioned earlier, Reigns adopted the “Tribal Chief” moniker, becoming Friday Night SmackDown’s top villain alongside the group he formed in The Bloodline. Much like the early days of The Shield, while still an antagonist, many fans can’t help but to enjoy his work; a stark contrast to his struggles as a babyface in the years before. 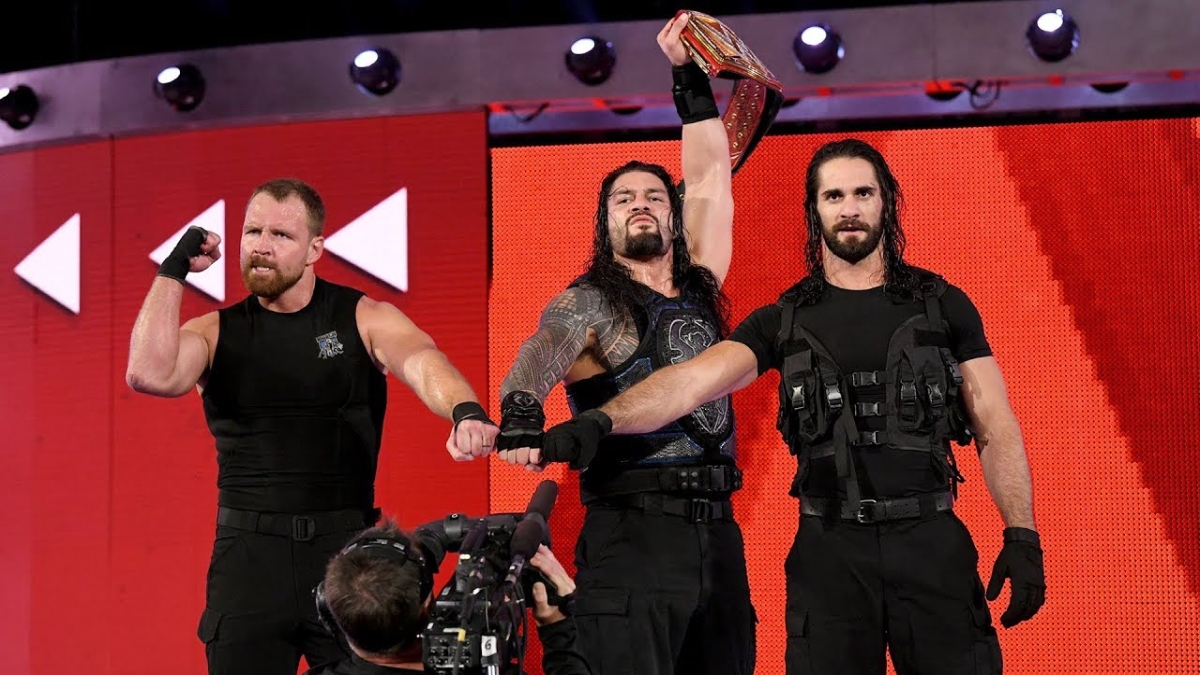 The WWE Debut of The Shield – In Closing

With Jon Moxley still a cornerstone of AEW, and following his 5-year contract extension announced this past October, it’s unlikely that we will see a Dean Ambrose return to WWE, and possibly a Shield reunion, anytime soon. However, it’s not exactly at this point, especially as each member of the original faction is still valuable in different ways. The Shield seized the opportunity given to them 10 years ago, going on to become some of the biggest stars in wrestling today. Whether in WWE, AEW, or elsewhere, it’s safe to say that they have the world of professional wrestling in their hands.