This Sunday, live from Fete Music Hall, Game Changer Wrestling makes its Providence, Rhode Island debut with GCW I Never Liked You. It would be fair to call this a landmark event for the independent wrestling powerhouse, not only due to the aforementioned Providence debut but the involvement of new faces as well. This isn’t to say that the favorites of GCW loyalists will be absent, as the card below will detail. Simply put, whether you’re a long-time fan of the company or are tuning in for the first time, there will be much to see and experience. Take a deeper dive into the action to expect before attending the show in person or watching live on FITE. 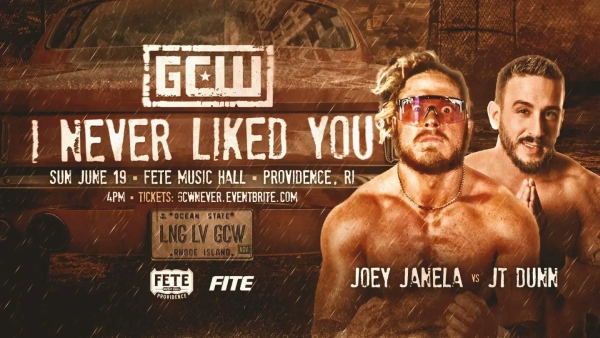 GCW I Never Liked You will be a night of multiple Game Changer Wrestling debuts. One of said debuts to keep an eye on is that of Chaotic Wrestling Owner JT Dunn. The self-proclaimed “Savior” has been one of the more notable independent wrestlers in the Northeast and it’s nothing short of poetic that he would make his GCW debut in his homecity of Providence, Rhode Island. To say that Dunn has been busy on the independent scene would be a massive understatement. As of this writing, he holds gold in not only his home promotion of CW but Northeast Wrestling and Wrestling REVOLVER to boot. He also currently leads the faction known as The Unit, which consists of such names as Danny Miles, Mike Verna, and Ace Romero.

Whether the other members of The Unit will become involved at GCW I Never Liked You remains to be seen, though one shouldn’t count out the possibility. Nonetheless, Dunn has a big night in store for him as he makes his company debut against one of said company’s most prominent stars: “The Bad Boy” Joey Janela. Love him or hate him, it would be fair to say that Janela’s matches are among the most unique in GCW. It would seem that he’s been on a quest to take on an eclectic group of opponents, no matter their experience level, star power, or wrestling styles. Janela will step into Fete Music Hall with the intention to win, even at the expense of Dunn. “The Savior” may have a trick or two up his sleeve, but expect New Jersey’s “Bad Boy” to be just as prepared. 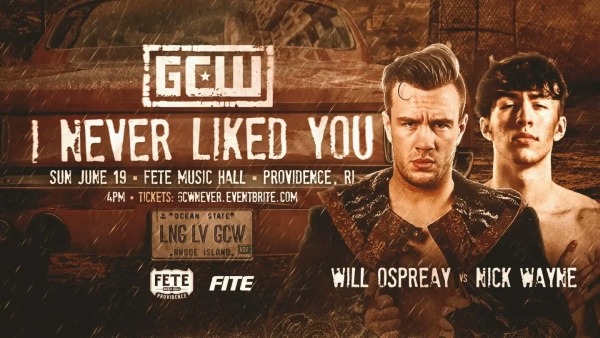 Will Ospreay Debuts for GCW at I Never Liked You

Another debut to keep an eye on heading into GCW I Never Liked You is that of New Japan Pro-Wrestling star Will Ospreay. “The Commonwealth Kingpin” has certainly come a long way since his days as a junior heavyweight during the mid-to-late 2010s. He ascended the NJPW ladder during the early 2020s, ultimately besting Kota Ibushi for the IWGP World Heavyweight Championship at Sakura Genesis 2021. Though his reign was cut short due to injury, he returned with purpose, not only showcasing his skill set in NJPW but other promotions as well. Despite being considered arrogant by many, few can argue with his results and it’s fair to say that, in due time, he’ll hold the IWGP world title again. The fact that such a notable international star will be appearing makes this Sunday’s show a must-see.

This Sunday, Ospreay wrestles his first GCW match and it should go without saying that all eyes will be on United Empire’s leading man. His opponent will be a unique one, too, as he’s set to square off against the young prodigy himself, Nick Wayne. Many indie wrestling fans will be familiar with the fact that he was offered an All Elite Wrestling contract that, at this point due to his age, he can’t take advantage of quite yet. In the meantime, he’s worked multiple matches for promotions including REVOLVER, Black Label Pro, PCW ULTRA, and many more. Wayne has wrestled his fair share of challenging opponents in his budding career but few are as formidable as Ospreay. Can Wayne pick up the upset victory at GCW I Never Liked You or will this be “The Kingpin’s” contest to win?

GCW I Never Liked You will take place in Providence, Rhode Island on June 19, 2022.

Stay tuned to the Last Word on Pro Wrestling for more on this and other stories from around the world of wrestling, as they develop. You can always count on LWOPW to be on top of the major news in the wrestling world, as well as to provide you with analysis, previews, videos, interviews, and editorials on the wrestling world. GCW I Never Liked You is set to air Sunday at 4 PM EDT on FITE. Tickets are also available via Eventbrite.